Old before your time? Scientists have put together five warning signs middle-aged people will suffer from frailness in retirement

Scientists have put together five warning signs middle-aged people will suffer from frailness in retirement.

Being inactive, obese or a smoker in middle age are the three biggest causes of elderly people being unable to live independently or bounce back after an illness, a UK study found.

High levels of the proteins interleukin 6 and C-reactive, which both suggest inflammation in the body, are also signs middle-aged people will later suffer from sudden weight loss, muscle weakness or low-activity levels, the research adds.

These proteins rise when people are stressed or eating too much sugar.

Professor Jeremy Pearson, associate medical director at the British Heart Foundation, which part funded the study, said: ‘Frailty is not just an issue for later life and should not be seen as an inevitable part of getting old.

‘This research shows that, by taking steps to ensure we are healthy going in to middle age, we can avoid getting on the path to a frail old age.’ 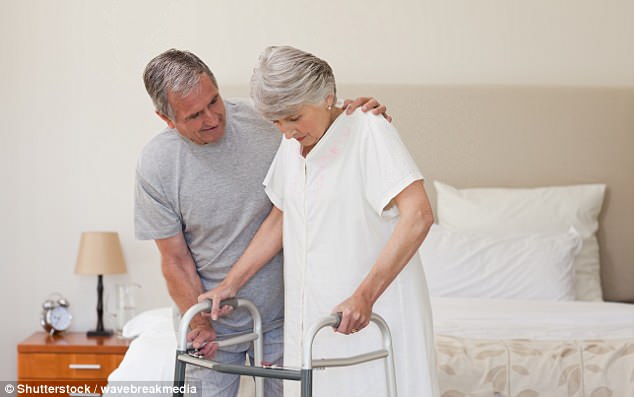 WHAT ARE THE FIVE WARNING SIGNS OF FRAILTY IN OLD AGE?

According to a June 2018 study by University College London, middle-aged people are at risk of frailness in later life if they:

The researchers, from University College London, analysed 6,223 people aged over 69 to determine their risk of frailty in old age.

Nearly 20 years earlier the scientists made detailed notes on the same people, who were then aged 45-to-55.

‘People who live together restrain each others’ behaviours’

Results further suggest almost eight per cent of people who are obese in their 50s are frail in old age, compared to 2.7 per cent of those of a healthy weight.

Inactive people have around double the risk of later frailness, with 6.2 per cent of sedentary people being physically weak in later life compared to 2.5-to-3.5 per cent of those who exercise.

It is also bad news for those entering middle age without a partner, with living alone almost doubling people’s risk of frailty in their twilight years compared to being married or cohabiting.

Some 5.5 per cent of divorced, single or widowed people become frail when retired, putting them at greater risk of chronic illness, disability and death.

This is compared to just 2.5 per cent of people in relationships.

Lead author Professor Eric Brunner said: ‘These results are not surprising, as we know that people who are married or in a relationship have better physical and emotional health.

‘They have social support and there is often one partner encouraging the other not to have that extra glass of Cabernet or to go out to the gym.

‘People who live together restrain each others’ behaviours, and this includes unhealthy behaviours which could lead to frailty in later life.’

The findings were published in the journal The Lancet.

Italy Has Reversed Its Stance On Mandatory Vaccination, Despite A Recent Rise In The Outbreak Of Measles

How You Can Feed Your Skin Superfoods – Women's Health