Men know less than women about calorie needs and limits: Almost HALF of men are unsure what their daily intake should be, study finds

Men are almost four times as likely as women to have a poor grasp of how many calories they need to consume daily for their age and activity level, a US study suggests.

American obesity rates are at historically high levels, researchers note in the Journal of the Academy of Nutrition and Dietetics.

An estimated 40 percent of adults, or more than 93 million people nationwide, are obese. While obesity has many causes, consuming too many calories is a big part of the problem.

Overall, 37 percent of men and 17 percent of women were unable to correctly answer questions about how many calories they would need daily to maintain their current weight, based on their age, sex and activity levels, the study found. 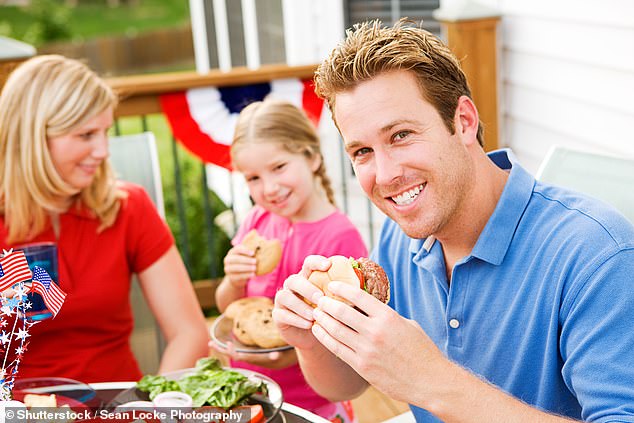 ‘So, it’s possible – even likely – that some participants may have simply guessed in the correct range,’ said Robin McKinnon, lead author of the study and a senior advisor for nutrition policy at the US Food and Drug Administration (FDA) Center for Food Safety and Applied Nutrition in College Park, Maryland.

‘Our analysis probably overestimates rather than underestimates how many people answered correctly,’ McKinnon said by email.

The gender gap in calorie knowledge persisted across racial and ethnic groups as well as different ages, incomes and education levels.

About 30 percent of white men and 56 percent of black and Hispanic men didn’t know the right range of calories for their weight and age.

Proportions were similar when comparing men and women with annual incomes under $20,000 versus over $100,000.

The study can’t show whether knowing daily calorie needs impacts how much people actually eat, or whether they are overweight.

‘The take-home message is that having a good idea of how many calories your body needs is really helpful for managing your weight – and that men could do (better) to be especially aware of this since they seem to be behind the curve in knowledge of this kind,’ said Susan Roberts, a nutrition researcher at Tufts University in Boston who wasn’t involved in the study.

‘Another message is that we should all be aware that calorie requirements decrease as we get older and factor that into changing food habits to age in a healthy way,’ Roberts said by email.

Calories are not the only thing people need to consider when making choices about what to eat, McKinnon said. People also need to eat a balanced diet.

The USDA also has a free online calculator that determines calorie needs based on age, gender, height, weight and activity level.

Hot weather: How to stay healthy in the heat – expert tips and advice

Death by diet: How risky is keto? Experts answer

The Hottest ‘RHOC’ Bikini Moments of All Time: Pics