The ‘holy grail’ of cancer treatment: Scientists take a huge step towards personalised therapies after developing an AI model that predicts how tumours will respond to drugs

The holy grail of personalised cancer treatment could be on the horizon after scientists have discovered how to calculate the best drug dose for each patient.

An AI model that replicates tumours and simulates how they will respond to treatments has been developed by researchers at University College London.

This could help doctors identify the best medication and drug dose to help a patient beat the disease, while minimising side effects and the risk of treatment resistance.

And it may be available on the NHS in as little as 10 years time.

‘It advances the move towards truly personalised medicine, with the potential aim that one day clinicians might be able to predetermine the most effective therapeutic plan for each patient’s unique tumour makeup,’ joint lead author Dr Simon Walker-Samuel said. 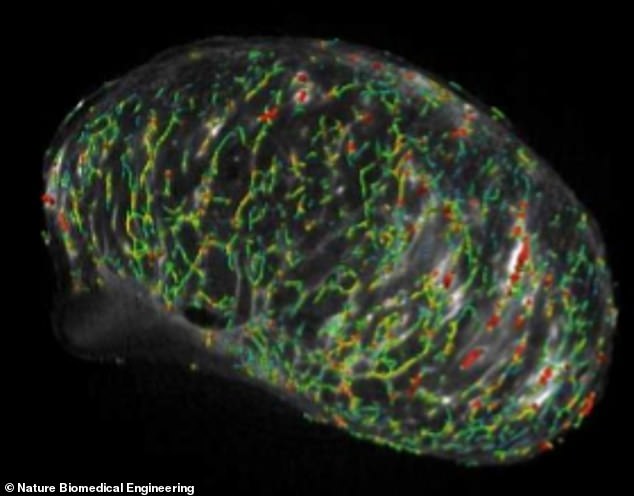 Image shows how drugs tagged with fluorescent molecules move through the bloodstream and cells of a human bowel cancer tumour. Using AI computer models, the scientists then predicted how well the growths would respond to these medications

Every cancer tumour is unique, with different growths varying hugely in their blood flow and cell numbers.

Tumour structure determines how well a drug is carried by its bloodstream and therefore if the growth will respond to it.

To test their model, the researchers implanted human bowel cancer tissue beneath the skin of mice with weakened immune systems.

Between 10 and 14 days later, drugs tagged with fluorescent molecules were administered into the tumours.

The tumours were then removed and made transparent via a cocktail of chemicals.

This allowed the scientists to monitor how different drugs traveled through their blood vessels and cells.

Using a AI mathematical model, which the researchers named REANIMATE, they then predicted how the growths would respond to different types of medication.

The study was published in the journal Nature Biomedical Engineering.

‘The new framework has a vast potential impact in helping to develop new cancer drugs and potentially providing a cost-effective way to test their efficacy before going to human trials,’ Dr Walker-Samuel said.

Co-lead author Dr Rebecca Shipley added: ‘This is a novel approach that provides an entirely new framework for therapy prediction in tumours and we are now developing ways of applying it to images taken from patient biopsies.’

Over the next three-to-five years, the researchers plan to take smaller tumour tissue samples from biopsies to see if similar drug-response predictions can be made. 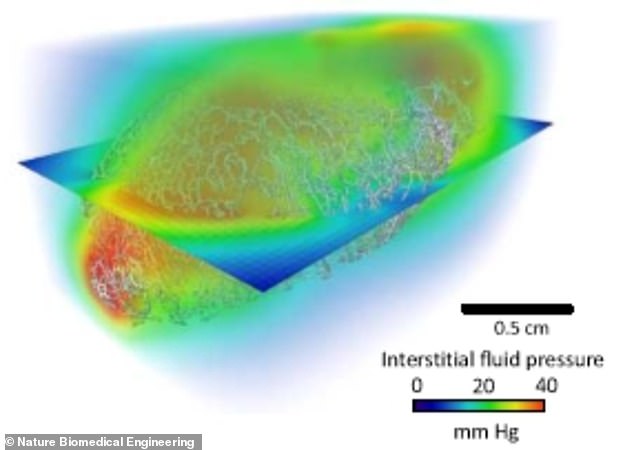 In the above tumour, blood vessels are shown in grey. The coloured regions show where blood was delivered, which contained anti-cancer drugs. The red areas had the greatest amounts of blood, the green and yellow places had medium amounts, and the blue had the lowest

Geoff Parker, professor of biomedical imaging at Manchester University, who was not involved in the research, told iNews: ‘This work is a tour de force that provides a significant step forwards in our understanding of key areas of cancer diagnosis and treatment that could lead to more efficient and effective drug development.’

One in two people in the UK will be diagnosed with cancer at some point in their lives, figures suggest.

And more than 1.7 million are told they have the disease every year in the US.

This comes after research released last August suggested AI stopped prostate cancer from spreading in a patient with an advanced form of the disease.

An unnamed patient with tumours that had spread outside his prostate was given a combination of an experimental drug and an approved cancer medication.

AI technology, known as CURATE.AI, was used to continuously assess how well the patient responded to the drugs, with the medications’ doses being adjusted accordingly, in a study by the National University of Singapore.

HOW DOES ARTIFICIAL INTELLIGENCE LEARN?

AI systems rely on artificial neural networks (ANNs), which try to simulate the way the brain works in order to learn.

ANNs can be trained to recognise patterns in information – including speech, text data, or visual images – and are the basis for a large number of the developments in AI over recent years.

Conventional AI uses input to ‘teach’ an algorithm about a particular subject by feeding it massive amounts of information.

AI systems rely on artificial neural networks (ANNs), which try to simulate the way the brain works in order to learn. ANNs can be trained to recognise patterns in information – including speech, text data, or visual images

The process of inputting this data can be extremely time consuming, and is limited to one type of knowledge.

A new breed of ANNs called Adversarial Neural Networks pits the wits of two AI bots against each other, which allows them to learn from each other.

This approach is designed to speed up the process of learning, as well as refining the output created by AI systems.

Does Dyslexia Gene Protect Against Concussions?

Asking if behavior can be changed on climate crisis

Can't Remember Your Dreams? There’s A Vitamin For That