The parents of a boy with a rare blood cancer have been left devastated after being told nothing more can be done to save him.

Oliver Brown suffers from myelodysplastic syndrome, which affects just four in every 100,000 people every year in the UK.

He discovered he had the disease when he was just eight, with doctors saying at the time he was the only boy in the country with the disease.

Now 11, Oliver has undergone two bone marrow transplants in hope of treating his disease. The most recent is thought to have taken place a year ago.

He was recovering from his most recent surgery at home in Plymstock, Devon, when the family received the devastating news on May 23 his transplant had ‘relapsed’.

His loved ones are now devoted to spending the precious time they have left with Oliver together as a family. It is unclear how long he is expected to survive. 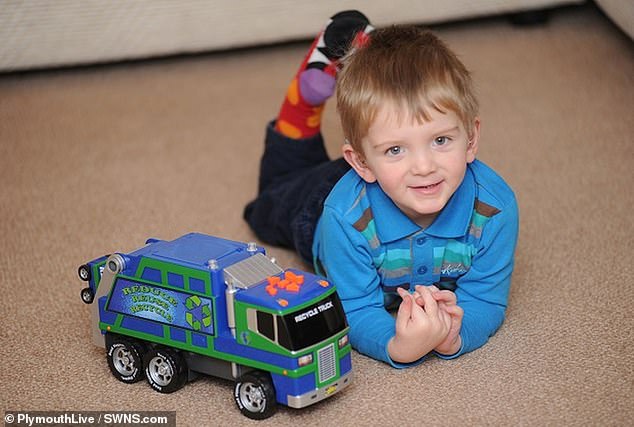 Oliver Brown has been told by doctors there is nothing more they can do to treat his blood cancer. The now 11-year-old (pictured in 2010) was diagnosed with myelodysplastic syndrome when he was eight and has exhausted his options after his two bone marrow transplants failed 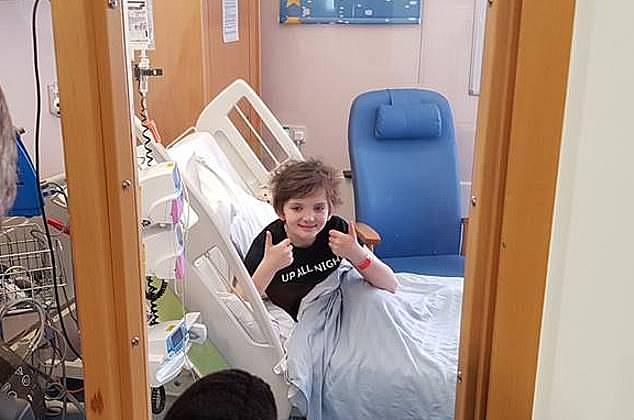 Oliver (pictured in hospital) was diagnosed with the rare disease after a routine test revealed his blood cell count was extremely low. The condition affects four in 100,000 a year in the UK 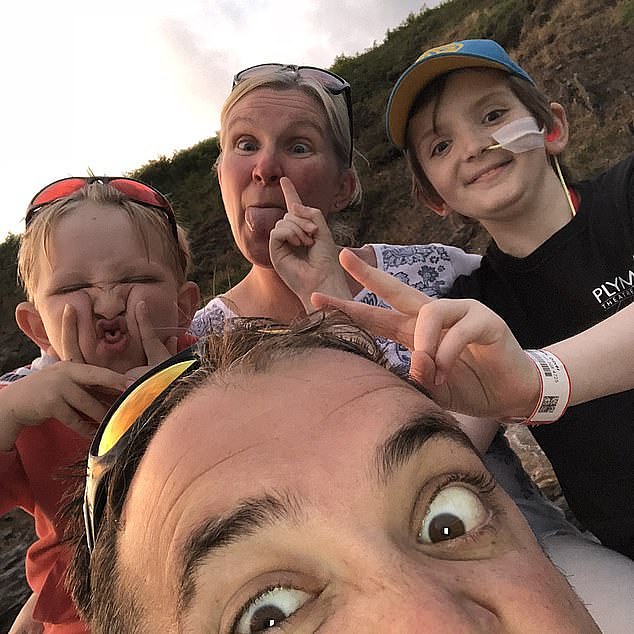 His loved ones are devoted to spending the precious time they have left with Oliver together as a family (Oliver is pictured right with his brother, mother Nicky, 49, and father Mike, 39)

Oliver’s father Mike, 39, said: ‘We were given the news Oliver’s second transplant had relapsed and we were out of options.

‘So we’re enjoying our time together, which means making small memories, they’re the most important.

‘We drop him at school as often as we can and take him home when he gets tired because he’s always talking about going to school, we’re having fun, getting up in the morning and having cuddles.

‘It’s important for [Oliver’s seven-year-old brother] Benjamin to have those memories as well.’

Around 2000 people in England are struck down with the rare form of cancer each year, according to 2016 figures, and an estimated 10,000 in the US.

Bone marrow is where our blood cells are made. In MDS, the bone marrow doesn’t make enough healthy blood cells.

Symptoms can include feeling weak or tired, having lots of infections, and bruising and bleeding easily.

MDS is more common in people over 60, but it can happen at any age.

There are different types of MDS. Some develop slowly, but others are more aggressive. Some types of MDS have a greater chance of developing into acute leukaemia.

The best treatment will depend on the type of MDS, but the aim of treatment is to help to improve the blood counts and relieve symptoms.

Oliver was diagnosed with myelodysplastic syndrome after a routine test revealed his blood cell count was dangerously low.

At the time he was one of just four known cases in the UK, with the remaining three patients being female.

It was later discovered Oliver developed the disease as a result of a complicated genetic disorder relating to the GATA2 gene, which also caused him to be born deaf.

Once diagnosed, Oliver’s family were forced to travel to Bristol once a week for treatment, which set them back £120 for the return journey.

Oliver’s mother Nicky, 49, said at the time: ‘On a good day, the journey takes just over two hours each way.

‘But with the holiday traffic over the summer it has sometimes taken as long as four hours each way.

‘It costs us £80 for a return trip – something we do every weekend. That’s before you even consider wear and tear.

‘We estimate with wear and tear it costs about £120 per journey.’

This left them struggling to make ends meet, which was made even worse when Mrs Brown quit her job as a community engagement officer for a local charity to be by her son’s side.

After his first transplant, Oliver was given the ‘all-clear’ in May 2017.

However, tests carried out at the beginning of 2018 revealed the disease had returned.

Oliver was therefore forced to go back to Bristol Children’s Hospital for treatment in May last year.

However, his second transplant has also failed.

In a desperate bid to save Oliver’s life, specialist teams at Bristol and Derriford hospitals consulted with experts around the world in the hope of finding the youngster another treatment option.

However, the medics have since confirmed no further therapy is available.

Oliver has started a course of chemotherapy to try and slow the progression of his disease. 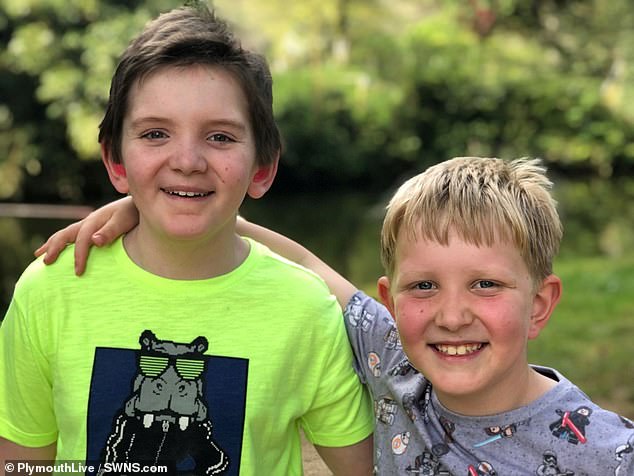 Oliver (pictured left recently with his seven-year-old brother Benjamin) was recovering at home in Devon when his second transplant ‘relapsed’. Doctors warn his cancer is incurable 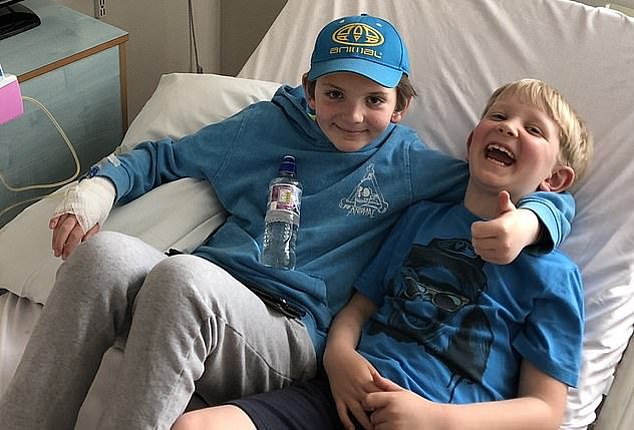 In the meantime, his father and six friends have committed to cycling from Land’s End to Bristol this September in the hope of raising £11,300 ($14,370) for the Wallace & Gromit Grand Appeal, which supports Bristol Children’s Hospital.

‘When Oliver was in isolation for some 12 weeks after his bone transplant they gave us an opportunity to take some time and more importantly they gave Oliver a different face, a different person to engage and play with,’ Mr Brown said.

‘It gave him the opportunity to play as an eight, nine, 10-year-old should play.’

The appeal has also funded ward equipment and medical facilities for the last 15 years in the Starlight Ward children’s cancer unit.

And the charity provides pioneering, life-saving equipment and research.

This includes ventilators, a cardiac theatre with advanced medical-imaging devices and an MRI scanner that can be used during surgery.

The leading blood-cancer charity Bloodwise has previously said myelodysplastic syndrome was only discovered around eight years ago.

A spokesman added there have been reported cases of people inheriting a faulty GATA2 gene.

However, this mutation is incredibly rare, affecting less than one in a million people.

But if a person has the genetic fault, they have a 50:50 chance of passing it on to their children, the spokesperson said. 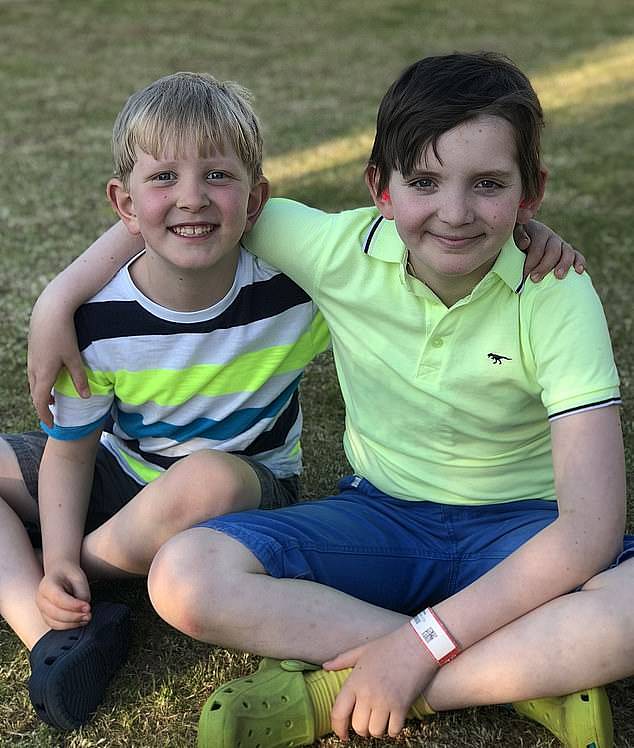 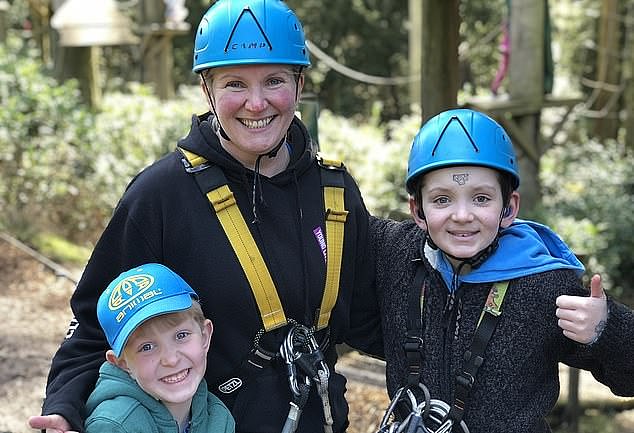 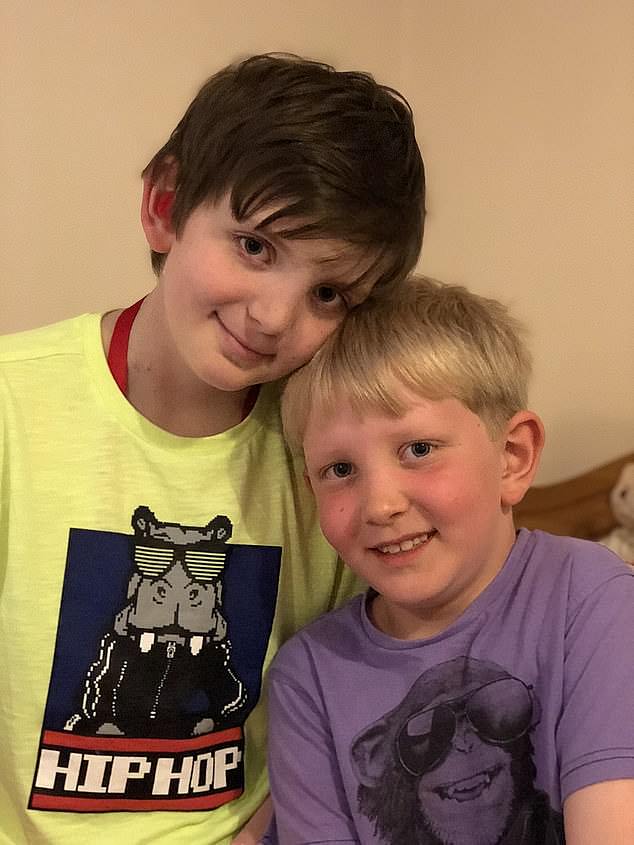 The boys’ father feels it is important for Benjamin (pictured right with Oliver) to remember his older brother fondly. The pair are ‘having fun, getting up in the morning and having cuddles’

Sexual addiction or Hyper-sexuality – If you want a Suffering is

Heart attack: Eating this sweet treat once a week may reduce risk of the deadly condition

Statins lower cholesterol, but what about ceramides?

How is Takayasu’s Arteritis Diagnosed?