A deaf woman has claimed she will soon be a millionaire after setting up a sign language school from her own home.

Katie Redstar, from Leeds, Yorkshire, became deaf after meningitis at the age of three and struggled to find work as an adult.

She hit rock bottom when Job Centre advisers said she would never be employed.

But refusing to live life without any ambitions, she set up a business in 2017, and has now signed contracts with six-figure companies, she said.

The entrepreneur, who has been visually impaired since birth and will soon be blind, has also signed a book deal. 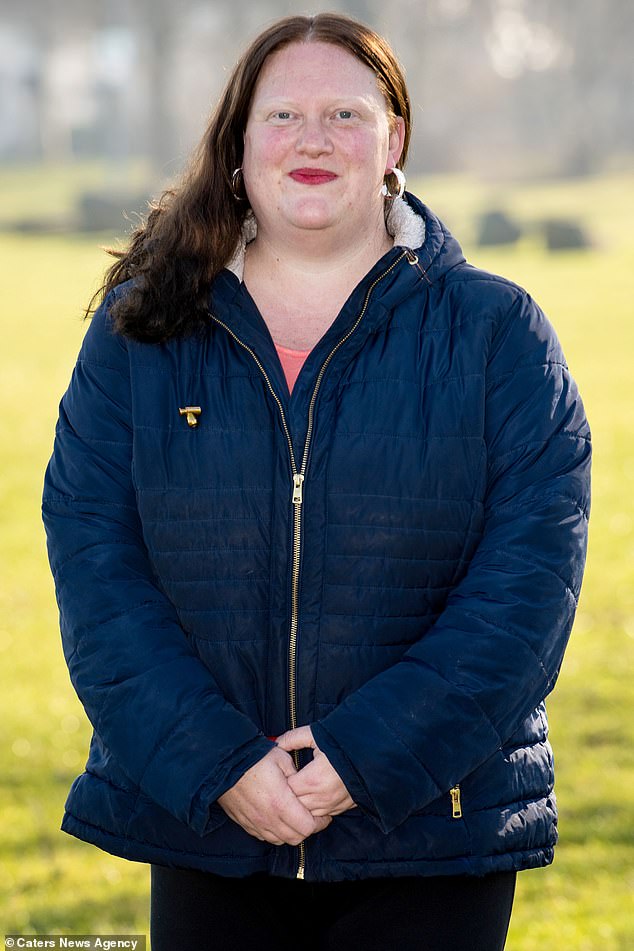 Katie Redstar, from Leeds, Yorkshire, claims Job Centre advisers said she would never be employed because she is deaf and has impaired vision 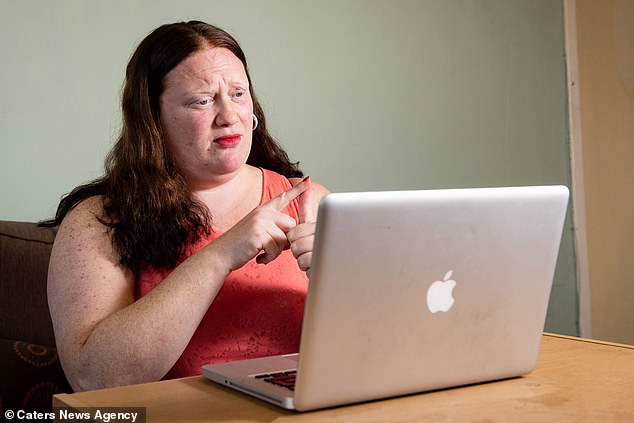 Ms Redstar set up her own business from home, offering sign language training to companies 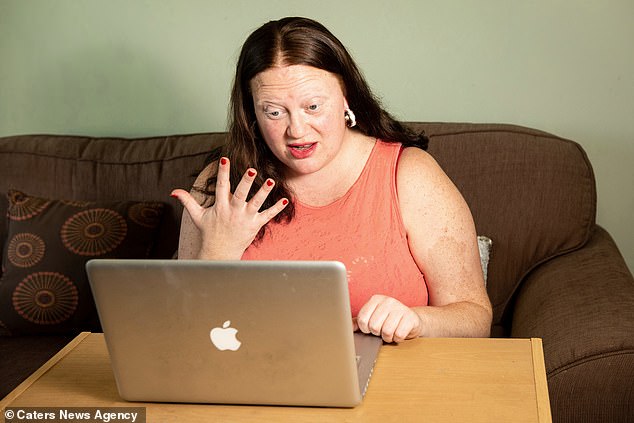 She said she has now signed contracts with six-figure companies, and is therefore set to become a millionaire by April

Meningitis is inflammation of the membranes that surround and protect the brain and spinal cord. The inflammation can damage nerves that run between the ear and brain.

Among those who survive meningitis, approximately one in five will have permanent disabilities, such as hearing loss, brain damage, loss of kidney function or limb amputations, with hearing loss being the most common.

Ms Redstar has also suffered from a rare degenerative disease that impairs her sight from birth, but said it is not clear what this disease is.

Ms Redstar claims in 2017 Job Centre advisers told her she couldn’t work and would have to stay on Employment and Support Allowance (ESA) for the rest of her life.

She said: ‘I was working in a charity shop, but I didn’t feel appreciated.

‘I told the Job Centre I wanted to work but they told me I couldn’t because of my disabilities.

‘A friend asked me if I was prepared to accept that, and I said no.

‘I had a vision for companies around the world to be accessible for deaf people.’

After learning sign language at four years old, Ms Redstar said the special form of communication became one of her passions.

Ms Redstar set up her own business from home, offering sign language training to companies including EE, in a bid to tear down barriers for other deaf people needing employment.

At first the business, Ignite Your Inner Light, was slow to progress. So Ms Redstar began to write her book, due to be published in June. 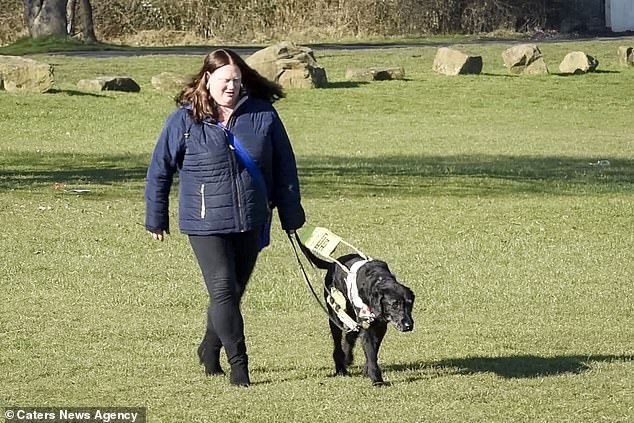 After learning sign language at just four years old, Ms Redstar said the special form of communication became one of her passions. Pictured, with her service dog 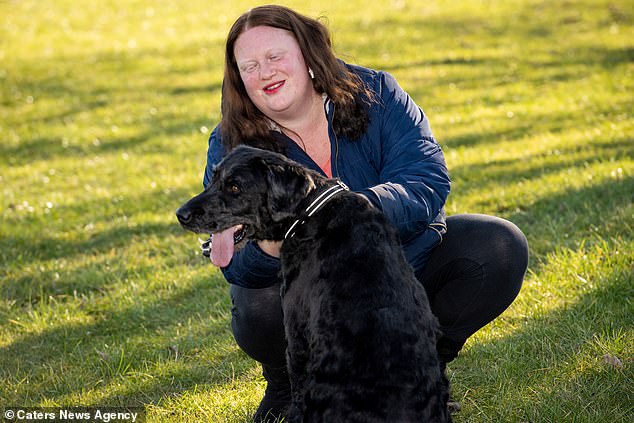 Next year, Ms Redstar hopes to buy a big house in Portugal and hopes to set up a children’s home for ‘differently-abled youngsters’ 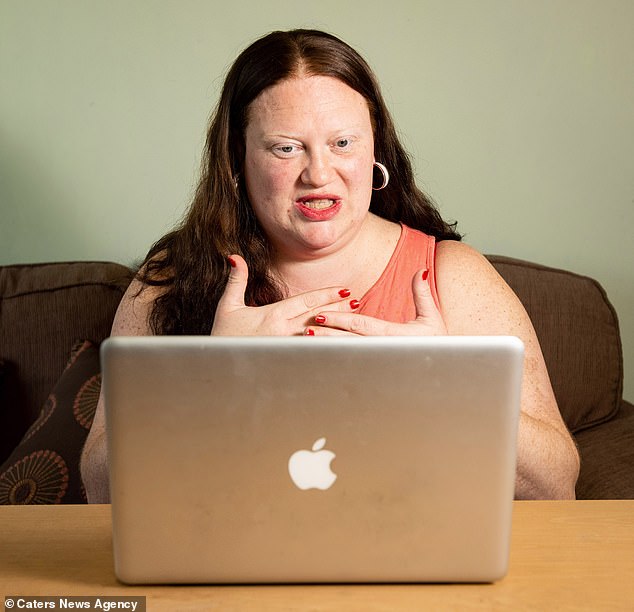 WHAT ARE THE AFTER-EFFECTS OF MENINGITIS?

Health problems after meningitis may be temporary or permanent, physical or emotional.

Physical disabilities may be obvious, however neurological and emotional problems may not be immediately apparent but can also cause a wide range of challenges.

After effects most likely to be caused by meningitis are:

But then she landed several deals with major companies – whose contracts total more than a million pounds, according to Ms Redstar.

She said: ‘For months it looked like nothing was happening but I remained consistent.

‘I decided to up my game by writing a book, which has attracted extensive coverage already and it hasn’t even been released.

‘Straight away the book gave me more exposure, and now I’m working with several six-figure clients.

‘Never in this world did I ever think I would become a millionaire when I started this.

‘I was just happy to make a little to live on but this has changed my life and made me believe in myself more than ever.’

With their deposits paid and the full payments due to land in April, it will be a stark contrast to the fortnightly £426 ESA that Ms Redstar has been receiving since December 2006.

Writing on her company Facebook, Ms Redstar said: ‘I have just signed up EE client for 250K for six months.’

Next year she hopes to buy a big house in Portugal and set up a children’s home for ‘differently-abled youngsters’.

‘I have a brain and am capable of thinking for myself and doing things for myself.

‘It may not be in the normal way, for example being able to answer phones, but I have a unique skill that is not widely available for people and companies to learn.’

Ms Redstar’s rare visual impairment will continue to deteriorate her sight until she becomes completely blind, but she doesn’t see it holding her back.

She said: ‘I used to be terrified about losing my sight, but I have accepted it now and I have stopped all the treatments because they weren’t working.

‘This has been a massive turnaround for me.

‘I am deaf and nearly blind so my motivation comes from within myself as we don’t know when the rest of my vision will go.

‘I want to achieve as much as I can while I can still see the small amount that I can.’

Meningitis is inflammation of the membranes that surround and protect the brain and spinal cord.

Anyone can be affected but at-risk people include those aged under five, 15-to-24 and over 45.

People exposed to passive smoking or with suppressed immune systems, such as patients undergoing chemotherapy, are also more at risk.

The most common forms of meningitis are bacterial and viral.

Symptoms for both include:

Headache is one of the main symptoms

Some 10 per cent of bacterial cases are fatal.

Of those who survive, one in three suffer complications, including brain damage and hearing loss.

Limb amputation is a potential side effect if septicaemia (blood poisoning) occurs.

Vaccines are available against certain strains of bacteria that cause meningitis, such as tuberculosis.

Viral is rarely life-threatening but can cause long-lasting effects, such as headaches, fatigue and memory problems.

Thousands of people suffer from viral meningitis every year in the UK.

Although ineffective, antibiotics may be given when patients arrive at hospital just in case they are suffering from the bacterial form of the disease.

Is Melbourne about to have another frankenfood moment?

COVID-19 deaths: CDC may underestimate risk for people of color