Medicare Part D spending for oral anticoagulants has risen by almost 1,600% since 2011, while the number of users has increased by just 95%, according to a new study.

In 2011, the year after the first direct oral anticoagulant (DOACs) was approved, Medicare Part D spent $0.44 billion on all oral anticoagulants. By 2019, when there a total of four DOACs on the market, spending was $7.38 billion, an increase of 1,577%, Aaron Troy, MD, MPH, and Timothy S. Anderson, MD, MAS, said in JAMA Health Forum. 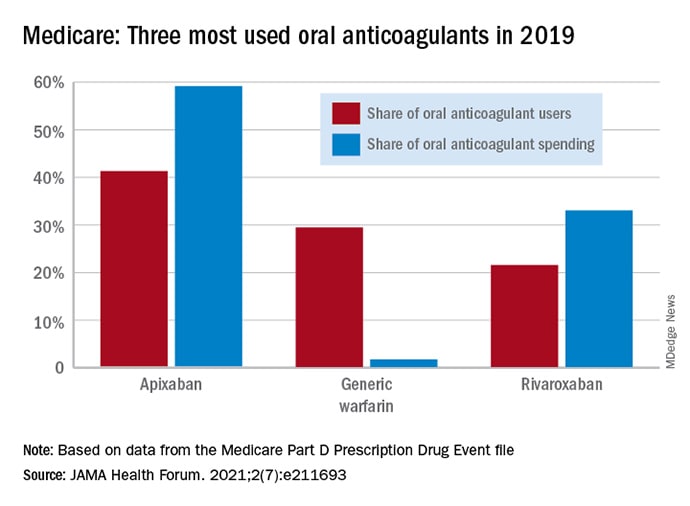 Over that same time, the number of beneficiaries using oral anticoagulants went from 2.68 million to 5.24 million, they said, based on data from the Medicare Part D Prescription Drug Event file.

“While higher prices for novel therapeutics like DOACs, which offer clear benefits, such as decreased drug-drug interactions and improved persistence, may partly reflect value and help drive innovation, the patterns and effects of spending on novel medications still merit attention,” they noted.

One pattern of use looked like this: 0.2 million Medicare beneficiaries took DOACs in 2011,compared with 3.5 million in 2019, while the number of warfarin users dropped from 2.48 million to 1.74 million, the investigators reported.

As for spending over the study period, the cost to treat one beneficiary with atrial fibrillation increased by 9.3% each year for apixaban (a DOAC that was the most popular oral anticoagulant in 2019), decreased 27.6% per year for generic warfarin, and increased 9.5% per year for rivaroxaban, said Troy and Anderson of Beth Israel Deaconess Medical Center, Boston.

Rising Part D enrollment had an effect on spending growth, as did increased use of oral anticoagulants in general. The introduction of competing DOACs, however, “did not substantially curb annual spending increases, suggesting a lack of price competition, which is consistent with trends observed in other therapeutic categories,” they wrote.

Anderson has received research grants from the National Institute on Aging and the American College of Cardiology outside of this study and honoraria from Alosa Health. No other disclosures were reported.

This article originally appeared on MDedge.com, part of the Medscape Professional Network.

How to live longer: A creamy food could lower high blood sugar and blood pressure

How to live longer: The Christmas drink that could increase your life expectancy