A disabled man is fighting for his life in hospital with sepsis and kidney failure after he was initially sent home from hospital with antibiotics.

Naythen Watkin, 22, was taken to A&E on January 1 by his mother Debra Newbert, 47, because he had been feeling sick for a week. His skin had turned ‘grey’ and he had been having trouble urinating.

But according to Ms Newbert, doctors failed to ask Mr Watkin any questions about how he felt and didn’t do a blood test. He was sent home with antibiotics.

The next morning, Ms Newbert was unable to wake Mr Watkin and he was rushed to the same hospital – Queen’s Medical Centre in Nottingham.

It was discovered that Mr Watkin, who had a kidney transplant when aged seven, had kidney failure and severe sepsis.

Ms Newbert was told her son only had ‘two hours to live’. Sepsis is known as a ‘silent killer’ because the symptoms are difficult to spot.

Mr Watkin, who has Dandy-Walker Syndrome – which inhibits his motor and language skills, has now been in hospital for two weeks undergoing ‘traumatic’ dialysis but his mother says he is looking better.

She is calling for doctors to take people with disabilities like her son more seriously. 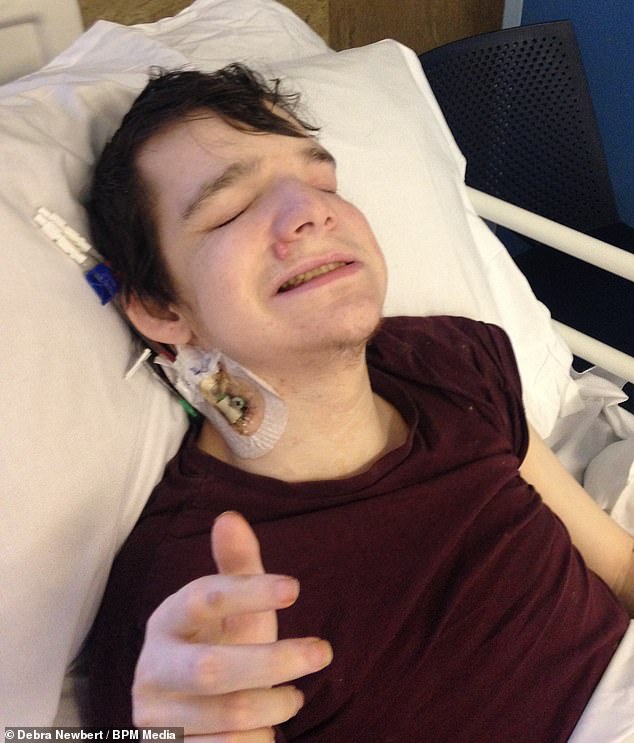 Naythen Watkin, 22, was sent home from hospital with antibiotics despite having underlying sepsis and kidney failure which almost killed him. He is pictured in hospital 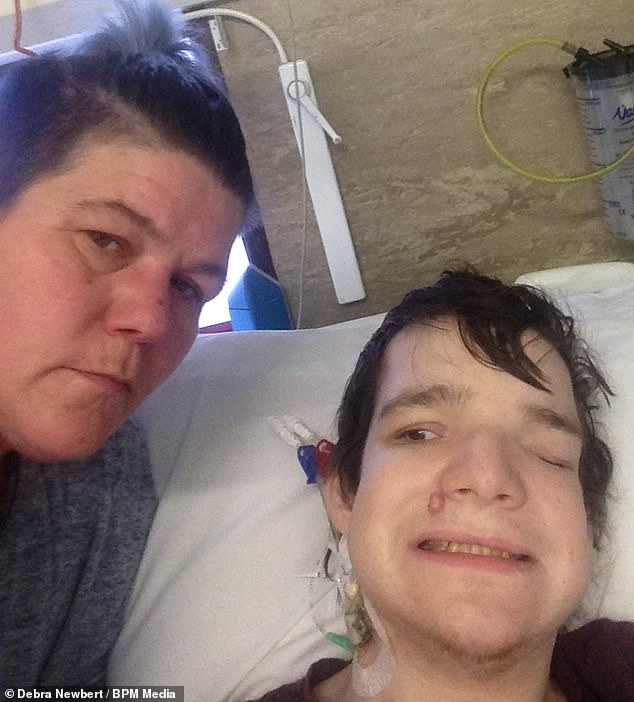 Mr Watkin’s mother, Debra Newbert, 47, was told her son only had ‘two hours to live’ when he was diagnosed with kidney failure and sepsis. They are pictured together

Ms Newbert said: ‘They told us he only had a couple of hours to live. They told us it was a very real possibility he would not survive.

‘In the critical care unit they managed to get the line in for dialysis but the doctor said it was touch and go.

‘He looked grey and a simple blood test would have shown that he was very ill.

‘He lives a perfectly normal life but the doctor never even asked Mr Watkin any questions. He could have told him how he felt, I don’t know.’

Ms Newbert added: ‘It might not have changed the outcome but he would not have been so sick.’

She first took Mr Watkin to A&E at the Queen’s Medical Centre on New Year’s Day.

HOSPITALS COULD FACE PENALTIES IF THEY DON’T SPOT SEPSIS

Hospitals could be fined for failing to spot and treat the ‘silent killer’ sepsis, under guidelines imposed in March that were drawn up by NHS England.

Casualty staff have to be extra vigilant for symptoms of the life-threatening complication in patients at A&E and on wards.

Junior doctors were also told to tell consultants if patients diagnosed with sepsis haven’t responded to drugs within an hour, as part of the move.

The move formed part of a drive to provide quicker diagnosis and treatment of patients arriving at A&E with suspected sepsis and other killers such as heart attacks and strokes.

The guidelines, which took effect from April 1, came after a handful of hospitals had been criticised for failing to prevent sepsis deaths.

Dr Tim Nutbeam, of the UK Sepsis Trust, said: ‘We have been working with NHS England for the past three years to improve the recognition and management of sepsis in hospitals.’

Ms Newbert, a full-time carer for her son, said she had noticed his skin turning ‘grey’ and that he was having trouble passing urine.

Upon arriving, Mr Watkin was sent to the Urgent Treatment Unit on the QMC site. He waited for six hours before seeing a doctor who sent him home with antibiotics.

‘He had not been very well, he had been sick for over a week and he was not passing urine or anything,’ Ms Newbert told Nottinghamshire Live.

‘The doctor asked me all the questions, he did not even take notice that Mr Watkin was there. He is difficult to examine but we can help, but they just sent us home with antibiotics.’

But the following morning, on January 2, Mr Watkin took a turn for the worse.

Ms Newbert said she was unable to wake her son and he was rushed to the resuscitation area at the QMC by an ambulance.

It was found Mr Watkin sepsis, a potentially life-threatening condition caused by the body’s response to an infection. It is not clear what infection triggered sepsis in Mr Watkin’s case.

Mr Watkin also had kidney failure, a symptom of which is difficulty urinating. This may have been caused by a kidney infection, which left untreated can cause the organ to fail.

It is not clear if Mr Watskin had an underlying kidney condition, given he needed an organ transplant as a child.

After discovering how ill Mr Watkin really was, he was transferred to the renal unit at Nottingham City Hospital on January 3.

Ms Newbert was told it was likely ‘he would not survive’.

Doctors typically treat sepsis in intensive care with antibiotics and fluids to stop the infection and protect the vital organs.

Mr Watkin is said to be recovering, but it is not clear when he will be discharged.

Ms Newbert is now calling for more training to help medical professionals interact with those who may have trouble speaking, or people who have similar disabilities or specific needs.

She said: ‘We live in 2020 and special needs are part of our community. So many young adults are overlooked.’

A full investigation is being run by NEMS, a contractor which provides NHS services for the Nottingham University Hospitals NHS Trust, and the Nottingham City Clinical Commissioning Group.

The NEMS team at the Urgent Treatment Unit said: ‘We have just been made aware of this incident and will immediately be commencing a full investigation under our governance process.

‘In the meantime, we would like to offer our kindest wishes to the patient and his family.’

Sepsis occurs when the body reacts to an infection by attacking its own organs and tissues.

Some 44,000 people die from sepsis every year in the UK. Worldwide, someone dies from the condition every 3.5 seconds.

Sepsis has similar symptoms to flu, gastroenteritis and a chest infection.

Symptoms in children are:

Under fives may be vomiting repeatedly, not feeding or not urinating for 12 hours.

Anyone can develop sepsis but it is most common in people who have recently had surgery, have a urinary catheter or have stayed in hospital for a long time.

Other at-risk people include those with weak immune systems, chemotherapy patients, pregnant women, the elderly and the very young.

Treatment varies depending on the site of the infection but involves antibiotics, IV fluids and oxygen, if necessary.

Bioabsorbable adhesive sheet can close wounds in tissues and organs

Abortion services in England to return to pre-pandemic arrangements

4 Moms Show Their Postpartum Bodies in Photo: 'If It Helped Even One Woman, We Would Be Happy'