A father-of-five from Merseyside has become the first person in the UK to receive a ‘vaccine’ for head and neck cancer.

Graham Booth, 54, received the potentially life-changing injection after a gruelling 11-year battle with the cancer that has returned four times.

Each time the disease returned, Mr Booth has needed facial surgery to remove and repair tissue, as well as requiring ongoing radiotherapy. 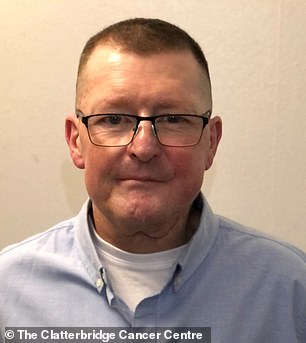 Graham Booth was first diagnosed with neck and head cancer in 2011 and the disease has since returned four times, twice in 2021

But the new ‘vaccine’ treatment will see Mr Booth receive a series of injections tailor-designed to match his DNA, as part of the Transgene clinical trial based at The Clatterbridge Cancer Centre in Wirral.

He will undergo immunotherapy treatment for a year and said he was full of hope from taking part in the trial, after facing a lack of options when his cancer returned last year.

More than 12,000 Britons are diagnosed with head and neck cancer every year and around 4,000 die from the disease annually.

Mr Booth said: ‘When I had my first cancer treatment in 2011, I was under the impression that the cancer would not return. My biggest fear was realised in 2016 when it came back and then in 2019 and then two cases in 2021,’ he said.

‘Last year I had the feeling of the cancer progressing and there were not a lot of options left.’

Mr Booth hopes his involvement in the trial will help ‘open a doorway’ for other cancer patients. 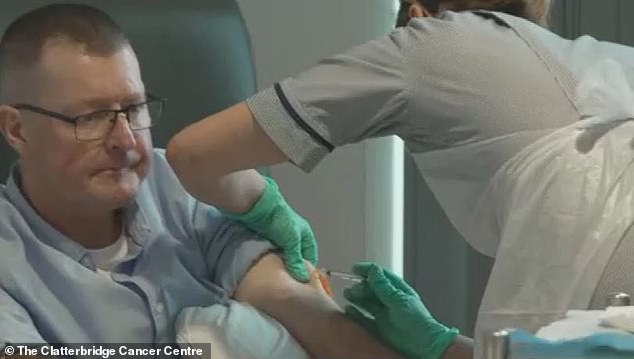 Graham Booth a 54-year-old father of five, from Wirral receiving the first injection in a new immunotherapy trial aiming to prevent his long-running cancer from returning

Mr Booth said: ‘This clinical trial has opened new doorways and gives me a bit of hope that my cancer won’t come back. And this could open doorways for other people.

‘I’m hopefully looking at a brighter future. A bit of hope that it never returns again – which would mean the world to my family and everyone around me.’

The treatment is part of a research project aiming to reduce deaths and recurrence in head and neck cancers, including those of the throat, neck, mouth and tongue.

Professor Christian Ottensmeier, chief investigator of the trial and a medical oncologist at The Clatterbridge Cancer Centre said: ‘It is a really exciting day in this important and potentially game-changing research.

What is immunotherapy and how does it work?

Immunotherapy is a treatment which uses a patient’s own immune system to fight cancer.

It works by helping the immune system recognise and attack cancer cells.

‘To have reached the stage of a patient receiving this treatment that only a few years ago was thought of as science fiction, is truly amazing.’

The immunotherapy injections are expected to produce fewer negative side effects compared to traditional cancer therapies, which can trigger nausea.

‘It is unlikely that this treatment will cause meaningful side-effects in our patients but likely it will cause very meaningful benefits,’ Professor Ottensmeier said.

More patients will join the trial and the researchers hope to learn more about its potential to treat other cancers.

According to charity Cancer UK about 12,500 people get diagnosed with head and neck cancers each year.

Survival rates for this cancer vary widely depending on exactly where the cancer develops.

In some cases more than half of people will survive longer than 10 years after their diagnosis but this can drop to less than one-in-five for people who have a deadlier type.

Survival rates are highest for cancer in salivary glands and lowest in the hypopharyngeal, the bottom part of the throat.

Poliovirus in London wastewater: Is it a cause for concern?

Check Out These Caitriona Balfe-Approved Period Underwear for Periods, Postpartum & Beyond

Menopause: The popular hot drink which may be behind hot flushes

What is a cardiac stress test?