Golf clubs should introduce crèches and female toilets to encourage more women to play the sport, experts have urged.

In an attempt to make the sport less elusive, researchers have released a series of recommendations to tempt people into taking it up.

The recommendations stem from a major new review, which found too many people are missing out on the health benefits of golf.

It comes just days before this year’s Ryder Cup tournament kicks off, with millions expected to watch the three-day tournament unfold. 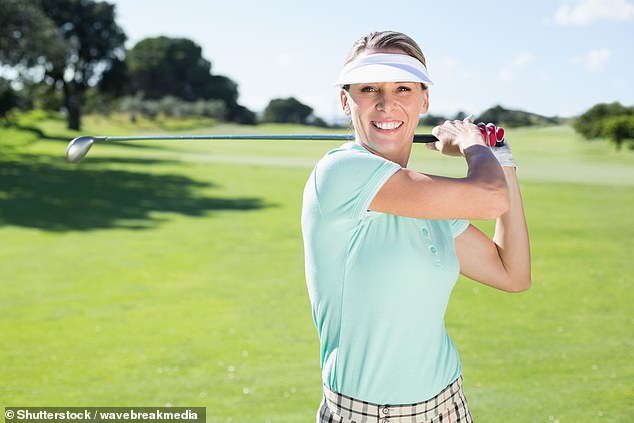 Experts are calling on golf clubs to introduce crèches and female toilets to encourage more women to play the sport. It has been linked to improved heart and mental health (stock)

The panel of experts, led by Dr Andrew Murray, from the University of Edinburgh, analysed 342 studies that investigated the benefits of golf.

They found the exercise of swinging a club and walking around a golf course can improve heart health and help people live longer.

The social side of the sport and getting out in the fresh air is also thought to boost mental wellbeing.

Around 60 million people play golf at least twice a year, but the panel acknowledged the participant profile is quite narrow and many believe it is ‘male-dominated’.

Players tend to be middle aged to older, male, of white European heritage, relatively well off and living in North America, Europe and Australasia.

It is also often perceived as expensive, male-dominated, difficult to learn and not a game for the young or those on the lower rungs of the social ladder.

The 25 experts agreed on more than 70 points that both golfers, clubs and policymakers should enforce to encourage more people to play.

HOW TO MAXIMISE THE HEALTH BENEFITS OF GOLF

But researchers from the University of Edinburgh argue many are reluctant to play due to perceptions the sport is expensive, elusive and male dominated.

To encourage its uptake, particularly among women, and maximise its health benefits, they make the following recommendations:

Writing in the British Journal of Sports Medicine, they said: ‘To increase participation in sport, there is a need for an inclusive environment that embraces, encourages and welcomes individuals, groups and families from all of society, and this is true of golf.

‘Some factors that may hinder interest and participation in the sport include perceptions that it is expensive, less accessible for those from lower socioeconomic groups, male dominated, a sport for older people, or difficult to learn.’

To achieve the World Health Organization’s recommended amount of exercise, golfers should aim to play for at least two-and-a-half hours a week.

They should also walk the course rather than getting about on a buggy, the experts add.

Although golf has proven heart-health benefits, it has been linked to an increased risk of skin cancer.

Players should therefore wear a high-factor sunscreen, as well as clothing that protects against the sun’s rays, such as a collared shirt and hat.

The experts also urge clubs to be ‘attractive to everyone’. This may include making membership more affordable or developing a culture that encourages women to play.

The experts add it is up to golfers and club members to make newcomers feel welcome.

Policymakers should work with industry and national associations to boost golf’s uptake, they added.

They should also collaborate with regulatory bodies to get the sport included in the Paralympics.

‘These outputs, if widely shared and adopted, will contribute to an improved understanding of golf and health, and aid these groups in making evidence-informed decisions and to improve health and wellbeing,’ the researchers conclude.

Although golf’s health benefits have been proven, experts have previously warned the twisting and turning involved in the sport could worsen lower-back pain.

How to talk to your children about sexual consent

Millennials are more sceptical of vaccines