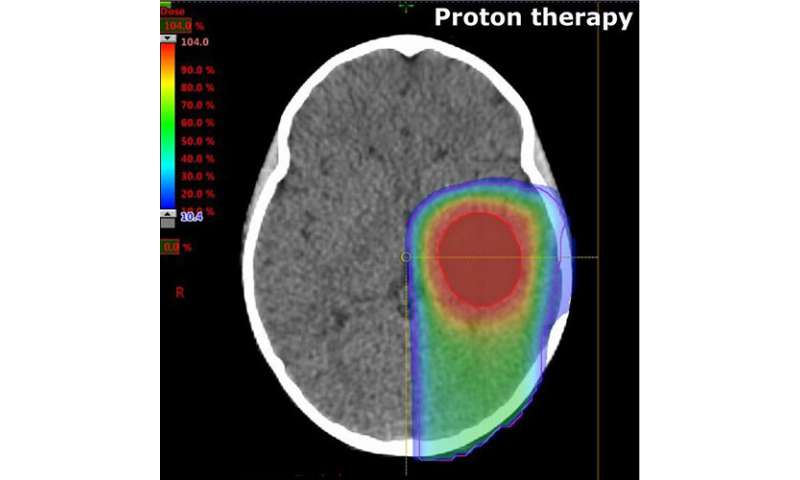 Adelaide is poised to open Australia’s first proton therapy center in 2025, with children and young adults expected to be the main beneficiaries of more effective cancer treatment with fewer side effects.

But just how safe is proton therapy for children with brain cancer compared to the conventional X-ray radiation delivered post-surgery?

A new study by University of South Australia (UniSA) researchers will explore this question over the next two years, using data from a US hospital to model patient outcomes based on individual cancers, radiosensitivity, sex and age of the children.

UniSA Ph.D. candidate Mikaela Dell’Oro and her supervisors (Dr. Michala Short, Dr. Puthenparampil Wilson and Prof Eva Bezak) have been awarded $100,000 by the Channel 7 Children’s Research Foundation to lead the project, which will assess the risk of developmental disorders in children as a result of using proton beams to treat pediatric brain tumors.

“This is particularly important when treating brain tumors in children because their brains are at a sensitive stage of development and highly susceptible,” says Dell’Oro.

Protons are designed to deposit radiation more conformally to the target volume, sparing both the healthy tissues before and beyond the target as well as critical structures surrounding the tumor.

“We know that proton therapy has fewer developmental side effects on children with brain tumors, but we need to dig deeper and find out how age, sex and an individual’s sensitivity to radiation also mitigate or increase the risk,” Dell’Oro says.

It is thought that females and younger patients are more sensitive to radiotherapy but existing research is based on adult data which is more than five years old—considered outdated in a rapidly advancing field.

“The techniques used in radiotherapy—both proton beam therapy and x-rays—have come a long way since then and we need to develop new modeling to predict the risk of secondary primary cancers and other complications in children.”

Brain tumors comprise 20 per cent of all childhood cancers and account for the largest number of pediatric cancer deaths in Australia at 39 per cent. They are treated with a combination of surgery, chemotherapy and radiotherapy, all associated with risks.

Radiotherapy is responsible for a range of mild to severe neurologic, endocrine and cognitive negative effects in children. Because proton therapy is more targeted, it is the preferred treatment for children.

“From what we know, proton therapy has less severe side effects and similar survival outcomes, but there is still a huge gap in our knowledge.

“It takes years to observe physical side effects and clinical trials are difficult due to practical reasons, so we need to look at computational modeling to estimate the risks for patients,” Dell’Oro says.

The number of proton therapy centers is rapidly expanding around the globe, with 89 facilities worldwide, predominantly in the United States, but also in Europe and Asia.

The Australian Bragg Center for Proton Therapy and Research will be the country’s first, located in the South Australian Health and Medical Research Institute (SAHMRI) on North Terrace.

It is anticipated the center will treat up to 700 patients a year, with around half of these children and young adults.

Experts say sharing popcorn can leave you with a nasty surprise

Would YOU wear it? The hi-tech ring that could banish your snores

Measurement of thoughts during knowledge acquisition

Is your toilet poisoning you? Scientists: Bad plumbing fuels bacteria