In just three years, electronic cigarette maker JUUL has come to dominate the American market with its vaping devices that look like thumb drives, a business success that has brought a public health dilemma for authorities in the US, and elsewhere.

On the one hand, e-cigarettes expose users to significantly lower levels of potentially toxic substances, except for nicotine, the US National Academies of Sciences, Engineering and Medicine said this year.

At the same time, numerous parents and high schools say teenagers are using JUUL, raising fears that a new generation is being exposed to nicotine, which is addictive but not cancerous.

The US Food and Drug Administration has denounced “an epidemic of regular nicotine use among teens,” and confirmed to AFP that its agents made a surprise inspection Friday of JUUL’s San Francisco headquarters, seizing more than a thousand pages of documents on its marketing practices.

The startup wasn’t the first on the market, but it quickly dethroned tobacco giants, including British American Tobacco, which markets e-cigarettes using a different technology.

JUUL has soared from a two percent market share in 2016 to 29 percent in December 2017, according to data published Tuesday in JAMA, the Journal of the American Medical Association.

By September of this year, JUUL had reached almost 73 percent of the market, according to Nielsen data provided to AFP by JUUL.

The e-cigarette market remains a fraction of overall tobacco sales but is growing fast.

“Like many Silicon Valley technology startups, our growth is the result of a superior product disrupting an archaic industry—in this case, one whose products are the number one cause of preventable death,” JUUL told AFP in a statement.

It added that the company “has helped more than one million Americans switch from cigarettes.”

CEO Kevin Burns said the company is cooperating with the FDA to “keep JUUL out of the hands of young people,” and has turned over 50,000 pages of documents to the federal health regulator since April.

JUUL is also available in Britain, Canada and Israel, although the latter country has forbidden sale of the strongest doses of nicotine.

Others, including Australia and Japan, have limited sales of the product to medical use only.

JUUL costs around $20 for the device and $30 for four refills, each containing the equivalent in nicotine of a packet of cigarettes. 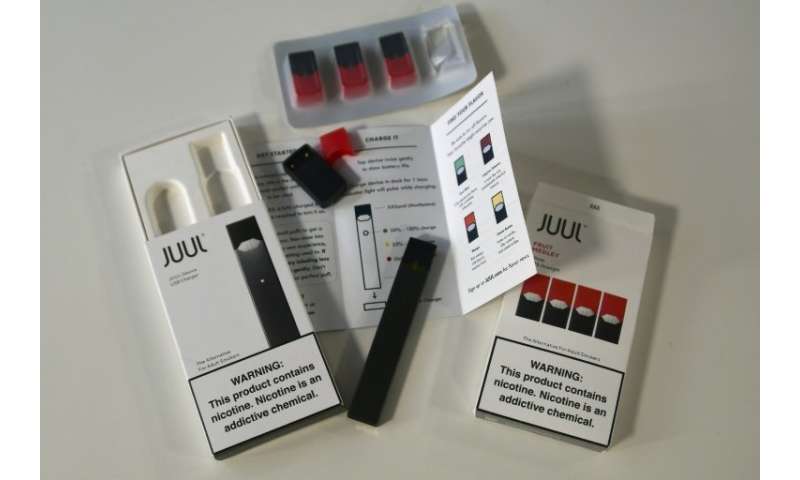 They are available in a range of flavors from “Virginia tobacco” to creme brulee and mango.

The company states that JUUL is not appropriate or intended for youth, but in well-off schools the product has an image of something innocent.

“JUUL is no big deal,” said a student at an upscale suburban Washington high school.

The number of high and middle school students who vape increased between 2011 and 2017, according to the latest national survey on tobacco and youth, although the number of smokers fell at the same time.

But the market is evolving very quickly and the central question is whether tobacco consumption, by vaping device or cigarette, rose among youth in 2018.

FDA Commissioner Scott Gottlieb suggested in September that the answer is “yes” when he said: “None of the other metrics that we track when it comes to kids and tobacco are moving in a favorable direction.

“Not the number of kids using traditional cigarettes, or cigars or chewing tobacco.”

He warned of an “epidemic” of vaping among the youth and said regulators are considering an immediate ban on flavored e-cigarettes.

The FDA prohibited e-cigarette sales to minors in 2016, meaning they cannot be sold to people under 18. In some states, buyers must be 21.

Buyers must provide a Social Security number or upload another form of identification.

Nonetheless, the company remains in the sights of Matthew Myers, president of the Campaign for Tobacco-Free Kids.

“By the time they pulled the social media campaign, JUUL already had become the dominant product in high schools across the country,” he said.

Myers recognized that the product is, for now, popular only among well-off youth, but warns that manufacturers are working on making e-cigarettes cheaper.

“And as soon as that happens, then the risk you run is it filters down,” he said.

His organization wants a complete prohibition on online sales, as is effectively the case for cigarettes.

Lipoproteins behave ‘almost like a tiny Velcro ball’: Genetics determines some proteins in HDL, but others are picked up by chance