In a prospective, observational study that included almost 1000 patients, the incremental cost-effectiveness ratio (ICER) of MSUs was $33,537 per quality-adjusted life year (QALY). This amount is less than the US threshold of $50,000 to $190,000 per QALY, which indicates cost efficacy.

“The cost-effectiveness improves based on the number of patients we treat per year,” said investigator Suja S. Rajan, PhD, associate professor of management, policy, and community health at University of Texas Medical School, Houston, when presenting the results.

The findings were reported February 10 at the International Stroke Conference 2022, which was held in New Orleans and virtually because of the pandemic.

Acute ischemic stroke is among the top 10 most expensive conditions for which Medicare provides reimbursement. MSUs have been shown to help reduce the time to administration of thrombolytics and improve 90-day stroke outcomes. 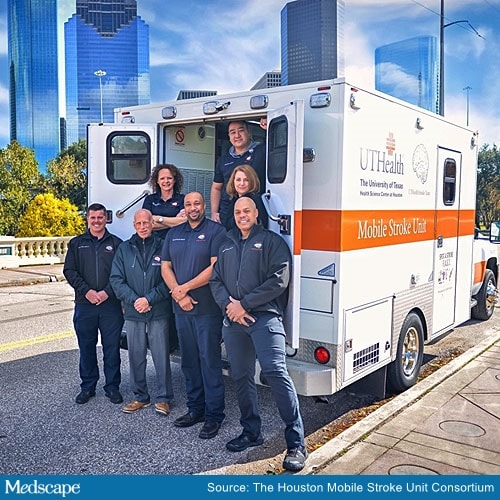 A University of Texas Health Science Center Mobile Stroke Unit. The study presented at ISC showed that mobile stroke units are cost-effective and are associated with reduced downstream stroke-related costs.

The researchers conducted the Benefits of Stroke Treatment Delivered Using a Mobile Stroke Unit (BEST-MSU) study, an observational, prospective, multicenter, alternating-week trial in the United States to determine the incremental cost and effectiveness of MSUs, compared with standard management. The study is the first to include 1 year of follow-up data, according to the researchers.

The main results of the study presented at last year’s ISC meeting showed treatment in an MSU was associated with better functional outcome at 90 days compared with standard management by emergency medical services.

For this analysis, the investigators collected data for the economic evaluation at baseline, discharge, and every 3 months for up to 12 months after discharge. Patient cost information was estimated based on resource utilization forms. The forms tracked utilization related to inpatient, outpatient, and home health services, as well as medical equipment. Using Medicare cost weights, the researchers converted the utilizations to costs.

Because the study was observational, the researchers adjusted the NBR to control for baseline differences and potential confounding. The NBR involved a multivariable ordinary least square regression analysis, adjusting for patient sociodemographic and clinical characteristics.

In addition, the study population had higher proportions of patients with baseline disability and with African American ethnicity, compared with previous stroke trials. For this reason, the investigators conducted a subgroup analysis of patients without disability (defined as mRS of 0 or 1) at baseline.

In examining quality of care, the researchers did not see significant differences between the MSU and standard-care groups in length of hospital stay or percentage of patients discharged home. The number of home days after discharge was higher in the MSU group and the standard-care group in the main and subgroup analyses. This difference affected the cost analyses.

The EQ-5D data showed that, at discharge, patients in the MSU group were slightly more disabled than those in the standard-management group. This difference decreased within 3 months, however. Adjusted QALY was 66.3 for the MSU group and 65.1 for standard management.

Patients in the MSU group had fewer rehospitalizations, long-term acute care visits, and nursing facility visits. These differences likely account for the difference in cost between groups, said Rajan.

The ICER for all patients was $33,537/QALY, and the ICER for patients with no disability at baseline was $10,740/QALY. Both figures indicate the cost efficacy of MSUs, said Rajan.

“Focusing mostly on stroke-related costs, the MSU is cost-effective, and especially cost-effective if we restrict our sample to patients with no baseline disability,” she added.

Commenting on the findings for Medscape Medical News, Christopher T. Richards, MD, emergency physician, Department of Emergency Medicine at University of Cincinnati College of Medicine, Cincinnati, Ohio, said that the investigators’ assumptions were practical and their follow-up methodology comprehensive.

If a given system with an MSU has different start-up or operational costs than were assumed in this study, however, the cost-effectiveness findings may change, said Richards, who also is medical director of University of Cincinnati Health Mobile Stroke Unit. Richards was not involved in the study.

The data indicate that MSUs are most cost-effective when treating patients with stroke who access 911 quickly, have severe stroke syndromes, and are independent at baseline, said Richards.

“In most MSU programs, we are dispatched out for a greater range of patients than just ischemic stroke patients who are eligible for tPA [tissue plasminogen activator],” said Richards. The current study does not examine the MSU’s effect on patients without stroke or those not receiving IV tPA.

The study was funded by the Patient-Centered Outcomes Research Institute and by the American Heart Association. Genentech donated alteplase for the study. Rajan reported having received a research grant from Genentech. Richards has disclosed no relevant financial relationships.

Difficult Conversations: No, you don’t have to share a drink with your teen to be ‘cool’