Musician, 21, is diagnosed with a brain tumour after telling his optician he struggled read the questions on Who Wants to be a Millionaire?

A musician who went to the opticians after struggling to see the TV was shocked to discover his blurry vision was caused by a brain tumour.

Harry Mockett, 21, noticed his eyesight deteriorating after finding it difficult to read the questions on Who Wants to be a Millionaire?.

He went to Specsavers, where he was given glasses but noticed no improvement after wearing them for a week.

The optician spotted swelling of his optic nerve on a follow-up appointment and ordered him to go straight to hospital.

Medics found he had a brain tumour the size of a golf ball and told him he needed urgent surgery before it robbed him of his sight. 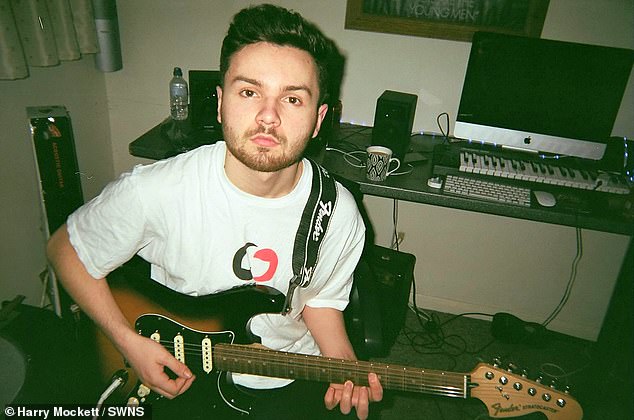 Harry Mockett, 21, noticed his eyesight deteriorating after findings it difficult to read the questions on Who Wants to be a Millionaire? 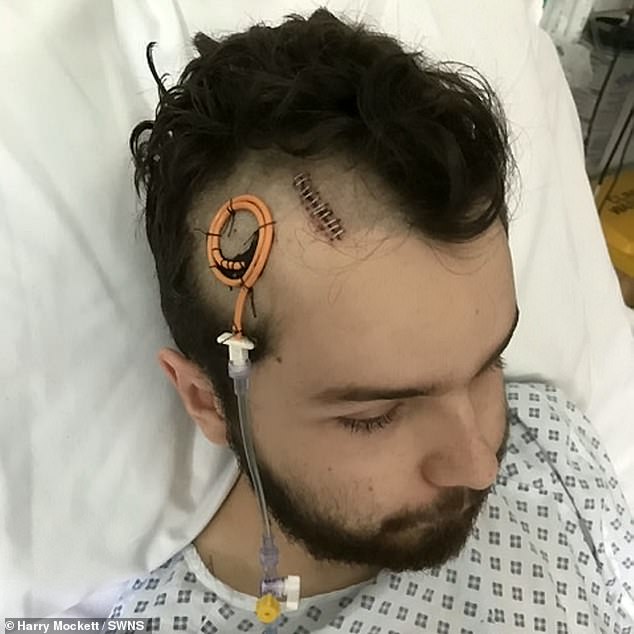 Medics found a brain tumour the size of a golf ball pressing on his optical nerve which, if left any longer, could have robbed him of his sight 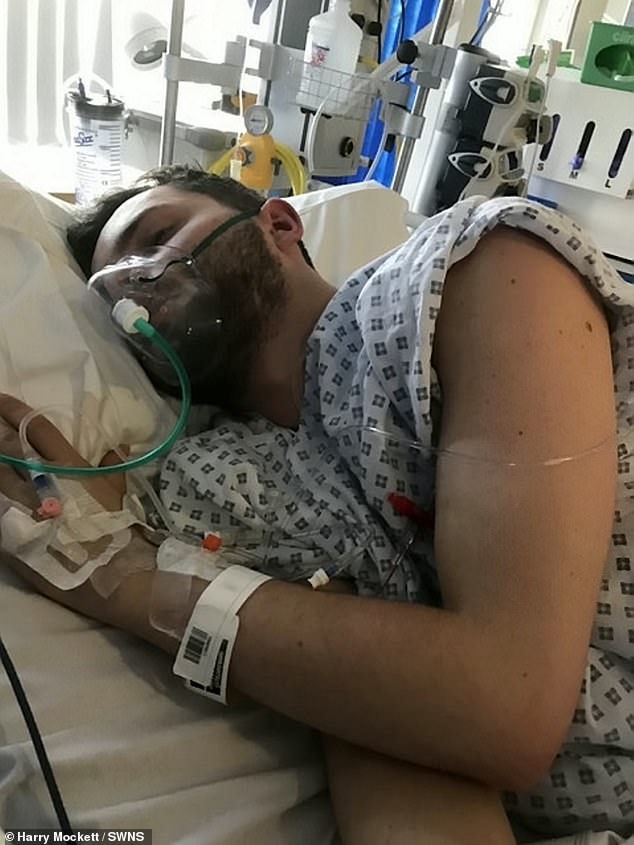 Mr Mockett, from Nottingham, was diagnosed with a craniopharyngioma – a tumour that develops close to the pituitary gland

Mr Mockett, from Nottingham, said: ‘It all happened so fast – one day I was chilling at home, the next they were rushing me into surgery to save my life.

‘I had no other symptoms other than my vision seeming to get blurrier, and I thought I just needed glasses – I had no idea I had a brain tumour.

‘I was watching Who Wants to be a Millionaire? at home and just realised that I was really straining to make out what the questions said at the bottom of the screen.

‘As my only symptom was blurry vision, it would have been so easy to ignore, but if I’d left it much longer, I could have ended up blind or the tumour might have killed me.

‘Luckily, through the work of some incredible surgeons and the support of my family, I’m now basically fine and back to normal.’

But he added: ‘It is terrifying thinking how waiting a couple of weeks longer could have resulted in a very different story.’

Mr Mockett noticed his quality of sight slowly decline over four months, but ignored it until he struggled to read the questions on the ITV hit show on April 2018.

He visited Specsavers for an eye test and was given glasses, but when they didn’t seem to make much difference, he returned a week later, in May.

After a second eye test, Mr Mockett was rushed to the eye casualty department at Northampton General Hospital.

He said: ‘The optician told me straight away “don’t go into work today, go straight to eye casualty”.

‘So I called in sick, not knowing that my previous shift would be the last time I’d be there for the next six months.

‘I had loads of assessments done at the hospital over the next week, and they booked me in for an MRI scan on the Friday, but I didn’t think too much of it. 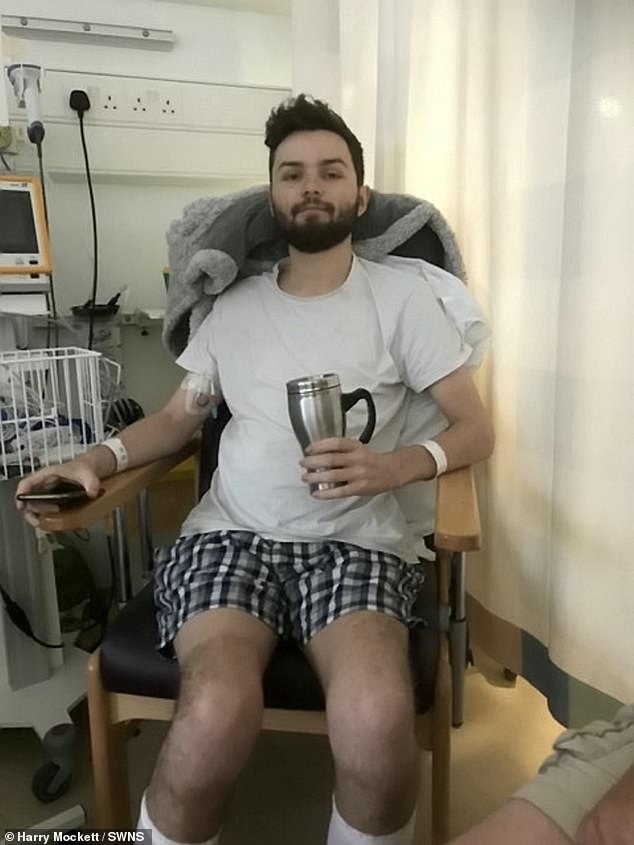 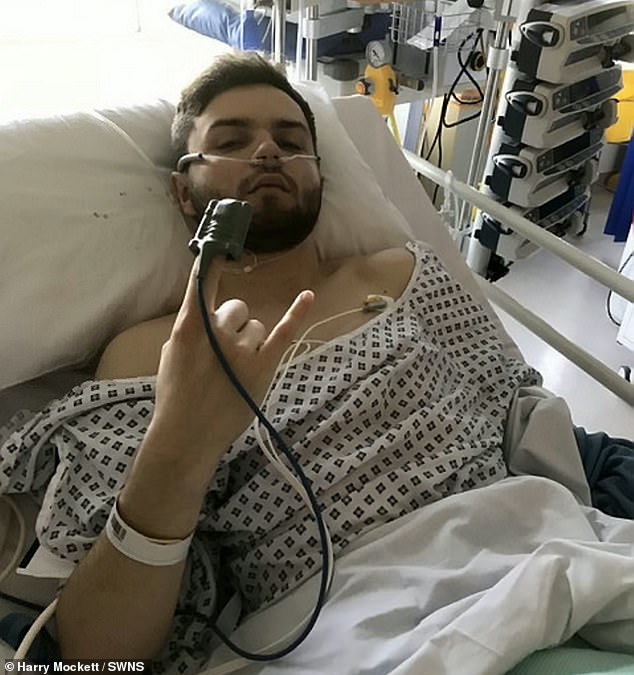 But he developed hydrocephalus, a build-up of fluid on the brain, and contracted bacterial meningitis

‘I really thought I was absolutely fine, I felt perfectly healthy – I even went out to a gig with my mates two days before the MRI scan.’

He added: ‘The doctors drew the curtains around my bed after the scan and told me the results showed I had a brain tumour that urgently needed removing.

WHAT IS AN CRANIOPHARYNGIOMA TUMOUR?

Craniopharyngioma tumours are most often diagnosed in children, teenagers and young adults.

These tumours tend to grow near the base of the brain, just above the pituitary gland.

Craniopharyngiomas do not usually spread, but they occur close to important structures in the brain and can cause problems as they grow.

They can cause changes in hormone levels and problems with eyesight. Children with craniopharyngioma can have weight gain and growth problems.

The first treatment is surgery to remove as much tumour as is safely possible.

Some tumours are filled with fluid.

They are called cystic tumours and cannot usually be completely removed.

Radiotherapy can slow down the growth of the tumour and keep it under control.

‘My mum obviously burst into tears, but I tried my best to remain calm and just focus on what we needed to do next.’

Mr Mockett was taken to John Radcliffe Hospital in Oxford by ambulance, where doctors revealed his brain tumour was bigger than a golf ball.

The mass was a craniopharyngioma – a tumour that develops close to the pituitary gland.

Any further growth of the tumour could have left Mr Mockett blind, and surgeons worked for six hours to remove the growth.

They removed 98 per cent of the tumour, but he developed hydrocephalus, a build-up of fluid on the brain, and contracted bacterial meningitis.

Doctors told his parents, Sue, 54, and Ian Mockett, 56, and his sister Rosie Matthews, 23, he only had a 50 per cent chance of surviving the night.

Ms Matthews said: ‘It was really scary – Harry’s always been healthy, and seeing him in the hospital bed with an oxygen mask on was terrifying.

‘He couldn’t breathe on his own, and when he was conscious, anything he said didn’t make sense, it was just a random jumbling of words.

‘Mum was understandably very emotional through it all, but I tried to put on a brave face for Harry and keep it light-hearted around him.

‘Harry and I kept joking around about how dramatic he was being, how typical of him to want all this drama with having a brain tumour.

‘Harry has always been such a joker, and we both knew that making fun of it all was the only way we’d be able to make it through.

‘He did get very subdued in the hospital, and I worried about getting the old Harry back, but joking around with him did give me a glimmer of hope.’

Mr Mockett had several operations to treat the complications of his surgery but doctors found signs the tumour was re-growing.

He travelled to Germany for two months for proton beam therapy in October 2018 and was finally able to return home to his family in time for Christmas last year.

Despite damage resulting in memory loss, Mr Mockett didn’t forgot how to play the guitar, and six months of hospital stays saw his passion for the instrument grow. 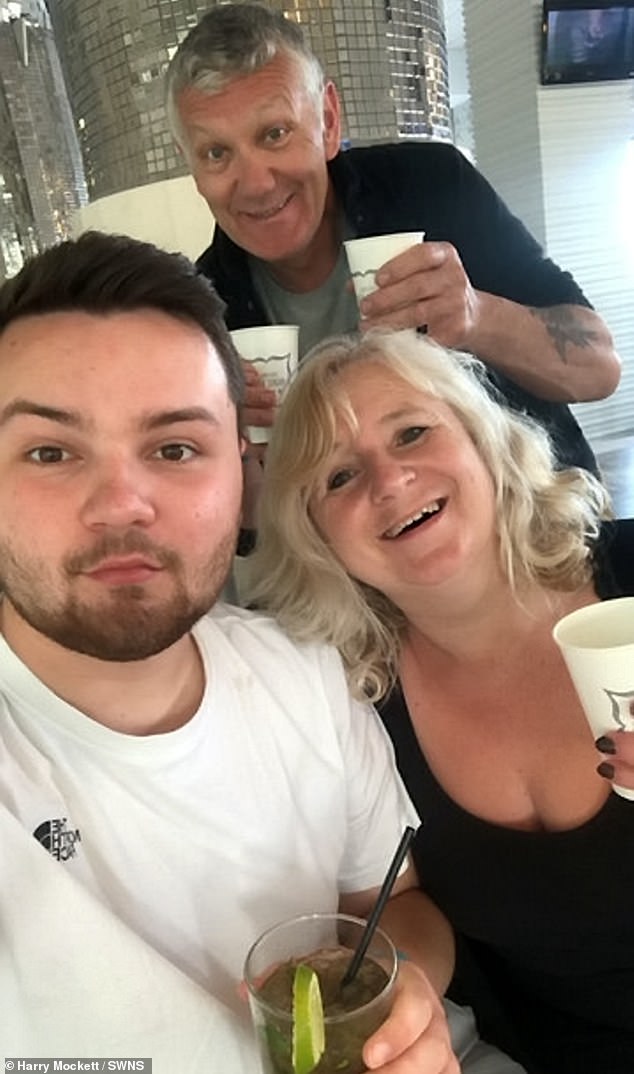 Doctors told his parents, Sue, 54, and Ian Mockett (pictured), 56, that he only had a 50 per cent chance of surviving the night 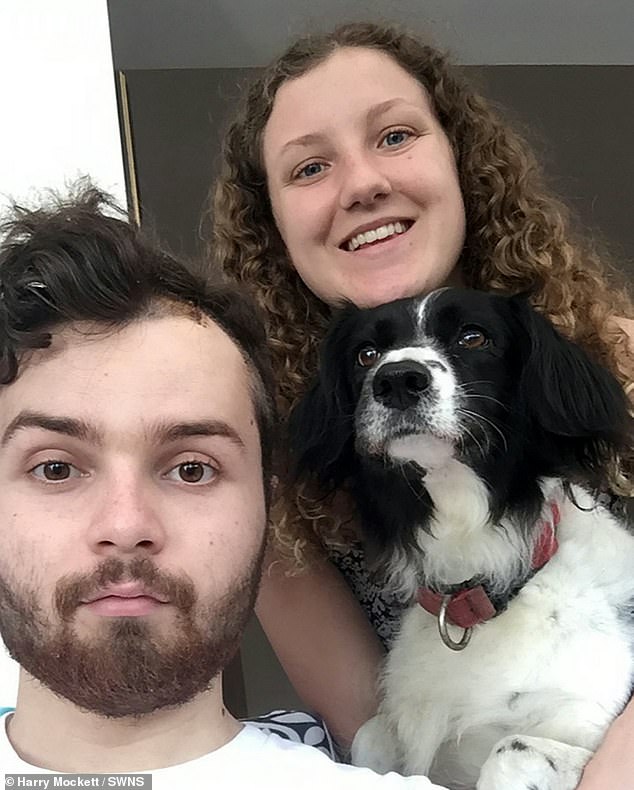 His sister Rosie Matthews (pictured), 23, said it was terrifying watching he brother hooked up to machines, struggling to breathe and talk on his own

The musician said: ‘Being in hospital for six months was really isolating – I’ve always been healthy and had no experience of staying in hospitals at all.

‘The tumour and the surgery really played with my memory, and sometimes I’d make no sense at all, telling Rosie things like “Bring me a McDonalds in your helicopter”.

‘I always loved playing the guitar, and was worried that the damage might affect my ability, but miraculously it didn’t alter how I played at all.

‘My guitar was my biggest companion in the hospital, and writing songs gave me a purpose and kept me focused on my future after the brain tumour.’

Mr Mockett got the all clear in February 2019.

He said: ‘Obviously, being diagnosed with a brain tumour was absolutely terrifying, but it has definitely helped me embrace the positives in life more.

‘I feel like I appreciate the good times in life a lot more than I used to after being through what I’ve been through.

‘I have short term memory loss, so I’ll occasionally forget what I was talking about mid conversation, but it’s luckily not as bad as it is for a lot of other people with brain injuries.

‘I’m forever grateful to be here, and I couldn’t have gotten through it without the amazing support of my wonderful family and friends.

‘It feels good to take back control of my life after this hellish year, and I’m looking forward to a more positive future after battling and beating a brain tumour.’

Number of measles cases is alarming