The more a new father freaks out about holding his baby for the first time, the more likely he is to be an attentive dad that shares parenting duties with the mother, new research reveals.

It’s a scenario we’ve all seen before best summed up in the 1987 cult classic comedy, Three Men and a Baby: men are clueless and terrified of caring for babies.

But, all that nervous bumbling – as immortalized by Tom Selleck, Steve Gutenberg and Ted Danson – just might be the very thing that turns men into great dads, according to science.

More and more research is indicating that men, too, experience hormonal physiological changes around the birth of a child – and it may well affect who they become as a parent.

The latest such study, from Notre Dame University, found that the ‘stress hormone’ cortisol surges in many new fathers, but that response may actually signal that they will go on to be more attentive parents. 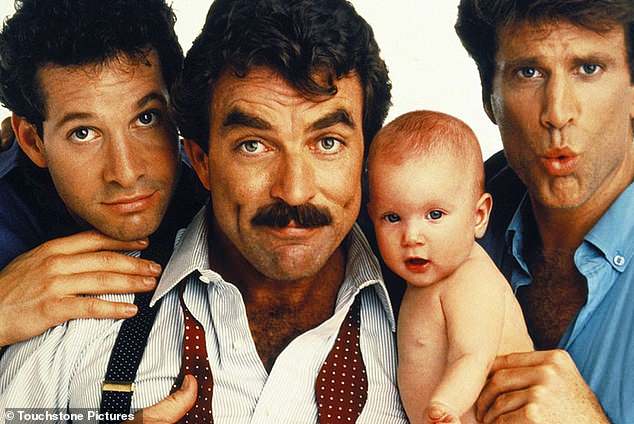 The panic and stress the guys in Three Men And A Baby felt when they had to take care ofa newborn may be just the thing that makes men good dads, a new study suggests

Becoming a parent is scary.

And for good reason. Bringing a baby into the world means becoming fully responsible for another life to feed, to teach, to support financially, to spend time with and to love.

We know that women’s estrogen levels increase dramatically during pregnancy, and it can take a great deal of time for her hormones to level out after giving birth.

In recent years, research has shown that dads feel hormonal effects of a new baby too, and can even feel something akin to postpartum depression.

A new baby can be hard on a relationship too, as the household dynamics have to shift and adjust to accommodate a new family member.

But stress isn’t all bad, and serves an important biological role.

Under stress, the body releases cortisol, a hormone that helps to kick our fight-or-flight system into high gear.

It can promote some less helpful or antiquated phenomena like anxiety and aggression, but cortisol also gives our vigilance a boost.

And anyone who has been around an infant knows you need to be on the constant lookout for what they’re putting in their mouths (is it cereal or gravel?), the state of a diaper (empty or full? One or two?) and any cords, knobs or hot surfaces.

‘Stress can be bad, but there needs to be some level of stress for us to be motivated to do something,’ including looking after and responding to a child, co-lead study author Dr Patty Kuo told Daily Mail Online.

According to the latest research, published in the journal Hormones and Behavior, fathers’ cortisol surges when they first get to hold their babies may signal that they are getting ready to be the best dads they can be.

The Notre Dame team took saliva samples from nearly 300 fathers during the first 48 hours of their new babies’ lives.

One sample was collected while the new dads were holding their newborns on the day they had been delivered.

A little more than half of the fathers completed followup surveys over the following four months, reporting their activities with their new children.

The dads who had had stress hormone surges while they held their little ones on that first day were also more likely to spend more time playing with and caring for the babies.

Higher levels of testosterone, however didn’t predict any particular behaviors. But those whose levels of the hormone fell on the second day after their baby’s birth in the men who were more involved in their children’s early lives.

‘We know that in mothers, an increase in cortisol makes them more responsive to an infant’s cues,’ says Dr Kuo. She and her team suspect the same might be true in these men.

‘There’s this misconception that feeding, diapering, bathing aren’t going to add anything much to bonding when you’er doing these mundane sorts of caring activities’ she adds.

‘But being able to read your baby’s cues accurately and responding the way the baby would want is key to the baby developing a healthy attachment, so this could be crucial.’

A new way to target high rates of obesity

Foods high in flavonoids may lower risk of cognitive decline