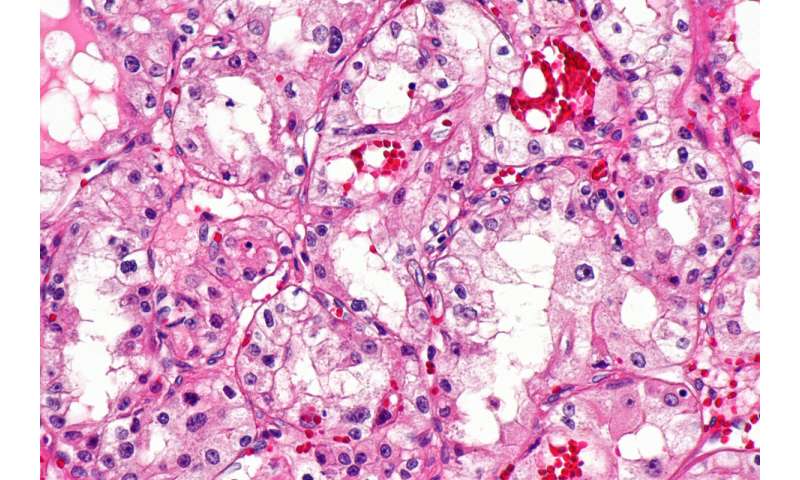 Researchers from Dana-Farber Cancer Institute report a response rate of 24 percent across all risk categories of patients given an oral first-in-class agent that targets hypoxia inducible factor (HIF) 2-a, which promotes new blood vessel growth that fuels kidney tumors.

Based on these findings, a phase III trial has been launched.

“A new drug [MK-6482] as a single agent showing an overall response rate of 24 percent across all risk categories—poor, intermediate, and good, and in a heavily refractory population—is quite promising,” said Toni Choueiri, first author of the abstract. Choueiri is director of the Lank Center for Genitourinary Oncology and the Jerome and Nancy Kohlberg Professor of Medicine at Harvard Medical School.

The drug targets a component of the body’s mechanism for sensing oxygen levels and turning on genes that enable the body to adjust to hypoxia—a shortage of oxygen—by making more red blood cells and forming new blood vessels. Dana-Farber scientist and Choueiri’s mentor and collaborator William G. Kaelin Jr. shared the 2019 Nobel Prize in medicine with two other researchers for unraveling this complex mechanism, which can be hijacked by cancer to help tumors survive and grow.

In the vast majority of patients with clear cell renal carcinoma, a tumor suppressor protein known as Von Hippel-Lindau (VHL) is not functional. As a result, HIF proteins accumulate inside the tumor cell, wrongly signaling a shortage of oxygen, and activating the formation of blood vessels, fueling tumor growth. Understanding this abnormal process has paved the way for new cancer drugs. MK-6482 is one of them, and is distinct in that it targets HIF-2a directly, leading to blocking cancer cell growth, proliferation, and abnormal blood vessel formation.

The study of MK-6482 included 55 patients with advanced clear cell kidney cancer who had an average of three prior lines of therapies.

The median duration of response had not been reached: 81 percent of patients had an estimated response of more than six months, and 16 patients continued treatment beyond 12 months. The median progression-free response rate was 11 months.

Fasting related diet inflammation in the gut to reverse

Dairy consumption guidelines ‘should be revised’

Research exposes pitfalls of opening up on social media