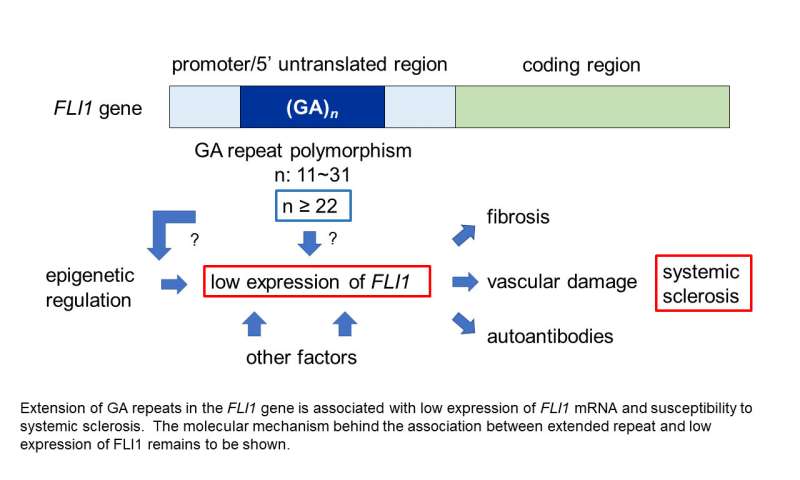 Systemic sclerosis is an autoimmune disorder that is characterized by excess deposition of connective tissue in the skin, lungs, kidneys and vessels, resulting in lung, heart and kidney dysfunction. In a new study, researchers from the University of Tsukuba revealed that patients with long stretches of repeat DNA sequences, also called microsatellite repeat polymorphism, in the gene for Friend leukemia integration 1 transcription factor (FLI1) are more likely to develop systemic sclerosis.

Systemic sclerosis is an intractable disease, and as of now immunosuppressive therapies are one of the few options to limit its progression. To date, a number of genes have been identified as potential contributors to the development of systemic sclerosis through genome-wide association studies (GWAS), whereby genetic variants in different individuals are compared to see if they are associated with the disease. However, genes identified through GWAS are shared between various autoimmune diseases and therefore do not seem to directly account for the molecular mechanisms leading to the deposits of connective tissue in the pattern seen in systemic sclerosis.

“We wanted to specifically go after FLI1 that has been shown to be produced to a lesser extent in the lesional skin of systemic sclerosis patients. We thought that downregulation of FLI1 may be a trigger for systemic sclerosis,” says corresponding author of the study Professor Naoyuki Tsuchiya. “Interestingly, the gene encoding for FLI1 contains a microsatellite region, and it is known that extended repeats of microsatellites result in reduced FLI1 expression. We hypothesized that patients with systemic sclerosis may also have these extended DNA repeats in the FLI1 gene.”

To achieve their goal, the researchers collected DNA of 639 systemic sclerosis patients and 851 healthy patients and specifically looked at the length of repeats of the DNA bases GA (guanine adenine) that make the microsatellite region in the FLI1 gene. The researchers investigated the DNA to determine the number of GA repeats beyond which the likelihood to develop systemic sclerosis significantly increases, and found that this value is 22. On the basis of this finding, the researchers defined a FLI1 gene with more than 22 repeats as an L (long) allele and with fewer than 21 as an S (short) allele.

“Our results show an association between GA repeats over 22 in the FLI1 gene and systemic sclerosis,” says lead author of the study Keita Yamashita. “We next wanted to have a closer look at the clinical characteristics of systemic sclerosis patients with FLI1 L alleles.”

The researchers found that FLI1 L alleles were significantly increased in patients with a modified Rodnan total skin thickness score (mRSS) over 10 compared with those with a score under 10. The mRSS is a measure of skin thickness and is frequently used to quantify the extent of connective tissue deposition in the skin of systemic sclerosis patients. The researchers next found that FLI1 mRNA levels were decreased in systemic sclerosis patients compared with healthy controls, and further reduced in healthy controls with FLI1 L alleles compared with healthy controls with FLI1 S alleles, showing that long GA repeats may be disruptive to the production of FLI1.

Vanessa Hudgens Reveals Why Keto Is 'Sustainable' for Her: 'It Gives You a Lot of Energy'

Diets ‘devoid of vegetable matter’ may cause colon cancer

The tiny tweaks that can age-proof your BRAIN

Working out your exercise schedule