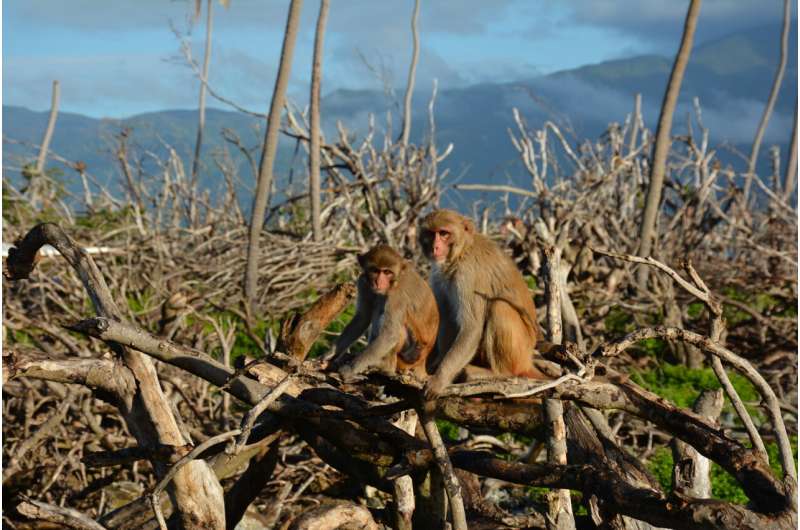 When Hurricane Maria slammed into Puerto Rico in September 2017 as a high-end category 4 storm, it left in its wake the largest catastrophe in the history of the island. The storm killed over 3,000 people in its immediate aftermath, knocked out power to nearly all of the island’s 3.4 million residents, and caused more than $100 billion in damages.

What was the toll of this stress and adversity on the long-term health of its population? And could exposure to extreme weather events accelerate the aging process?

“While everyone ages, we don’t all age at the same rate, and our lived experiences, both negative and positive, can alter this pace of aging. One negative life experience, surviving an extreme event, can lead to chronic inflammation and the early onset of some age-related diseases, like heart disease,” said corresponding author Noah Snyder-Mackler, an assistant professor at Arizona State University’s School of Life Sciences. “But we still don’t know exactly how these events get embedded in our bodies leading to negative health effects that may not show up until decades after the event itself.”

As the final impact on the survivors’ mental and physical health remains to be tallied, a group of biologists led by Snyder-Mackler have looked toward one of our close evolutionary cousins for the first clues.

Along with the human toll, the devastation impacted all the island’s wildlife, including a group of free-ranging rhesus macaques living on the isolated Cayo Santiago island near Puerto Rico. The animals have lived on the island since 1938, when the Caribbean Primate Research Center field station first opened.

Now, the ASU team, led by Snyder-Mackler and lead author Marina Watowich–a graduate student at the University of Washington and research scientist at ASU, and their collaborators at the Caribbean Primate Research Center, University of Pennsylvania, University of Exeter and New York University, have published one of the first results that shows the effects of natural disasters may have molecularly accelerated aging in the monkeys’ immune systems.

As a high-end category 4 hurricane, Maria caused massive devastation to the natural habitat and research infrastructure on Cayo Santiago. Remarkably, only 2.75% of the macaque population died in the immediate aftermath of the storm. And in the year after the hurricane, there was no difference in survival. But, was the health of the hurricane survivors affected in other ways?

People of the same chronological age—the number of years since birth—can differ in when and if they develop disease. It is well-established that people who have suffered extremely adverse experiences have higher risk of developing heart disease and other diseases more common in older individuals. How these detrimental experiences “get under the skin” to promote disease is still unknown. One idea is that this phenomenon is potentially due to extreme adversity “aging” in the body. People can differ in their biological age, which can be measured by molecular signposts embedded in our genes, immune system and physiology.

“From this study, we have measured the molecular changes associated with aging, including disruptions of protein-folding genes, greater inflammatory immune cell marker gene expression and older biological aging,” said Watowich. 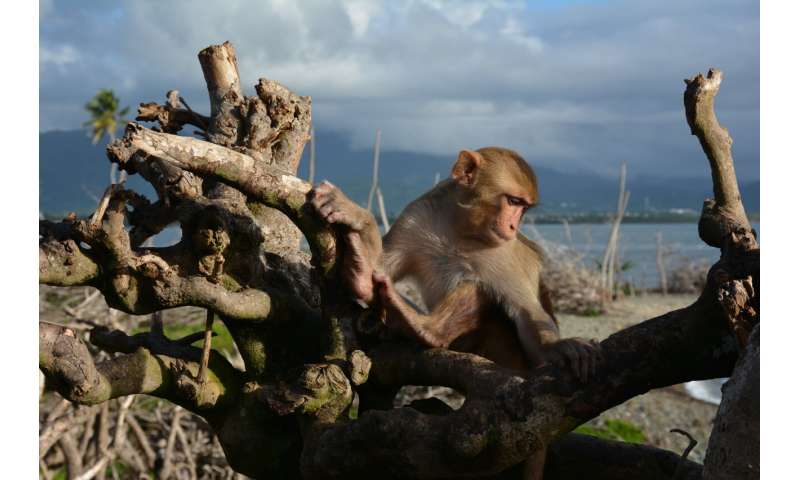 After a careful analysis of the genes expressed in the macaques’ immune cells, the researchers found that the adversity resulting from the hurricane may have accelerated aging of the immune system.

“On average, monkeys who lived through the hurricane had immune gene expression profiles that had aged 2 extra years, or approximately 7-8 years of human lifespan,” said Watowich.

One kilometer off the southeastern coast of Puerto Rico lies Cayo Santiago, a 15.2-hectare island home to a population of 1,800 free-ranging rhesus macaques that have been studied for almost a century.

“Cayo Santiago was the first part of Puerto Rico hit by Hurricane Maria and took on the full force of the category 4 storm,” said Snyder-Mackler. “The hurricane destroyed homes and infrastructure across Puerto Rico, and on Cayo Santiago it decimated most of the vegetation, as well as the water cisterns and research infrastructure needed to maintain the field station.”

The rhesus macaques share many behavioral and biological features of people, including how their bodies age, but compressed into a lifespan one quarter of ours. By studying the macaques, the scientific team knew they could get estimates of aging in years rather than the decades from equivalent human studies.

To test how Hurricane Maria influenced immune cell gene regulation and aging, Marina Watowich and the rest of the team were able to leverage a collection of blood samples and history of detailed demographic data from age-matched subsets of the Cayo Santiago rhesus macaque population.

The down regulation of so-called heat shock genes, which promote the proper function of protein-making in our cells, was most affected, some with two-times lower activity after Hurricane Maria. These genes have also been implicated in cardiovascular and Alzheimer’s disease. 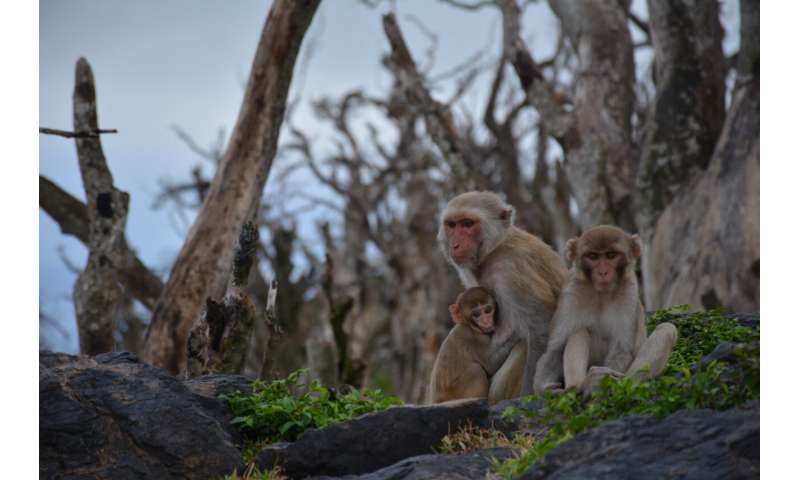 To understand how the hurricane may have affected amounts of immune cell populations, they looked at profiles from single-cell RNA sequencing to identify genes that are preferentially expressed in key immune cell types.

“Overall, cell-specific markers of canonical pro-inflammatory immune cells, such as CD14+ monocytes, had higher expression in older individuals and those that experienced the hurricane. Further, expression of helper T-cell genes, an anti-inflammatory cell type, decreased in older animals and those after the hurricane. Together, this possibly implicates more inflammatory activity in animals after storm, similar to what we see in older individuals,” said Snyder-Mackler.

Getting under the skin

From their long-term studies, as part of a collaboration with the Caribbean Primate Research Center, University of Pennsylvania, University of Exeter and New York University, they had four years of data prior to Hurricane Maria (n = 435) and one year after (n = 108) Hurricane Maria. They hypothesized that exposure to the hurricane would recapitulate molecular changes associated with the natural process of aging.

“Our findings suggest that differences in immune cell gene expression in individuals exposed to an extreme natural disaster were in many ways similar to the effects of the natural aging process,” said Snyder-Mackler. “We also observed evidence for accelerated biological aging in samples collected after animals experienced Hurricane Maria.”

“Importantly, we identify a critical mechanism—immune cell gene regulation—that may explain how adversity, specifically in the context of natural disasters, may ultimately ‘get under the skin’ to drive age-associated disease onset and progression,” said Watowich.

Interestingly, not all monkeys responded similarly to the hurricane. For example, some monkeys’ biological ages increased much more than others. The team hypothesizes that there may be other aspects of the monkeys’ environment that can influence their response to adversity.

For example, just like in people, social support is a critical aspect of the ability to help cope and deal with adversity. It is possible that monkeys with greater social support after the storm were better able to overcome any detrimental effects—an aspect the team hopes to investigate soon. The study did have its limitations; foremost, that they could not measure aging rates within the same individuals before or after the hurricane.

For future studies, they hope the work can expand to include longer-term studies of for every individual within a population to learn more about the intersection between biological aging, adversity and social structures and in the face of a natural disaster.

Complicated Appendicitis During Pregnancy: Surgery May Be Best

How To Make Your Bedroom More Energy Efficient

Lung cancer symptoms: Three signs on your face that could signal the deadly disease