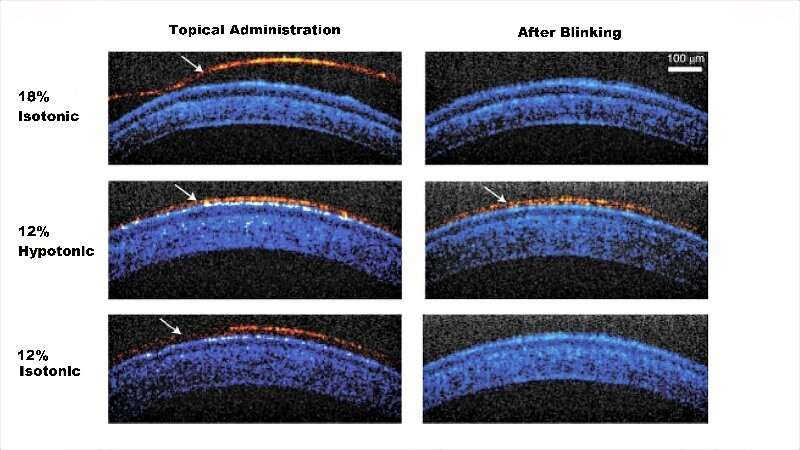 Johns Hopkins Medicine researchers have created a gel-based eyedrop that responds to the eye’s temperature and allows drugs to remain longer on the eye surface, penetrating tissues more effectively without obscuring vision. Tested in mice, rabbits and pigs, the formulation could reduce the number of times a day that patients need to reach for the eye dropper.

The study was published Sept. 7, 2020, in Nature Biomedical Engineering.

“The main problem with conventional liquid eye drops is that they are very short lasting and not very much drug gets into the eye because the watery substance is blinked away quickly,” says Laura Ensign, Ph.D., associate professor of ophthalmology at the Johns Hopkins Wilmer Eye Institute. “So, eye drops often have to be applied multiple times per day to be effective.”

More than 90% of drugs for eye conditions are delivered by liquid eyedrops, say the researchers. For people with irritation, glaucoma or dry eye, drops are required multiple times per day. Each dose comes with a small risk of side effects, which can cause patients to skip doses and reduce the treatment’s effectiveness. Patients who do so risk additional problems such as prolonged discomfort and vision loss.

In the study, the team of biomedical engineers and ophthalmologists used a compound, called Pluronic F127, a polymer that responds to body temperature and creates a gel. Currently, Pluronic F127 is a component in various over-the-counter lubricating eye drops, but at very low concentrations. These formulations do not become a gel on contact with the eye. Previous tests in animals of a gel-forming concentration often resulted in clumpy, uneven layers on the eye that quickly got caught up in the lids and lashes. Vision also was obscured.

To solve the clumping problem, the researchers needed to create a drop with enough Pluronic F127 molecules to form a gel, but fluid enough to spread across the eye. They landed on an ionic carrier solution that could be absorbed into cells on the eye’s surface, leaving behind the Pluronic F127 polymers. The solution keeps the gelling molecules apart long enough for them to spread out and bind together in a uniform layer.

“It’s a simple modification as far as composition, but it causes the drops to behave very differently when applied,” says Ensign.

In tests on rabbits, the drops were administered five times each day for two weeks without any adverse effects seen in the rabbits’ behavior (such as increased blink rate or eye rubbing) or on eye tissues examined under a microscope. Tests on pigs, whose eyes are more like human eyes in size and composition, showed similar results.

The researchers were surprised to see that since the gel-based drops remained on the eye longer than liquid drops, the treatments could reach the eye’s notoriously hard to penetrate back layers. Tissues in these layers—such as the retina, choroid and macula—are sites for some of the most common blinding diseases, including diabetic retinopathy and macular degeneration.

In pigs induced by a laser to develop symptoms similar to human macular degeneration, the researchers applied a daily dose of their new eye drops carrying a drug called sunitinib that slows the disease’s progression. This cut in half the amount of vision-blocking blood vessel overgrowth in the retina when compared with pigs receiving drops without the drug.

Jackass' Steve-O Gets Candid About Past Drug Use: I Was ‘Desperate and Pathetic’

You Don't Look Sick: 'I sneak out of disabled toilets so nobody judges me'

Type 2 diabetes: The best diet to help you lower your diabetes reading to prevent symptom