The children destined to die, turn blind or fight a lifetime of ailments: Rare genetic diseases have robbed these 5 youngsters of a normal childhood

At first glance they appear to be like other healthy children, but these five youngsters are destined to die, turn blind or fight a lifetime of ailments.

Three are unlikely to survive for much longer, one is slowly being robbed of his vision and another relies on round-the-clock care from her parents.

MailOnline is today revealing their daily battles, and the despair of their heartbroken parents, who fear their lives could be cut short at any moment, as part of an annual fundraising campaign.

Peter Andre, Una Healey and Kimberley Walsh are among the raft of celebrities that are supporting this year’s campaign, on September 21.

An estimated 500,000 children in the UK are living with genetic disorders, ranging from the more common cystic fibrosis, to much rarer ones. 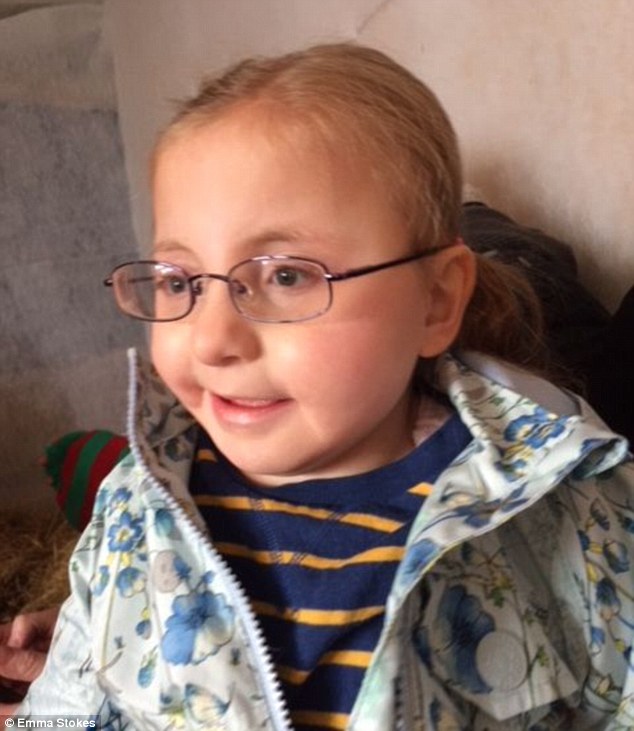 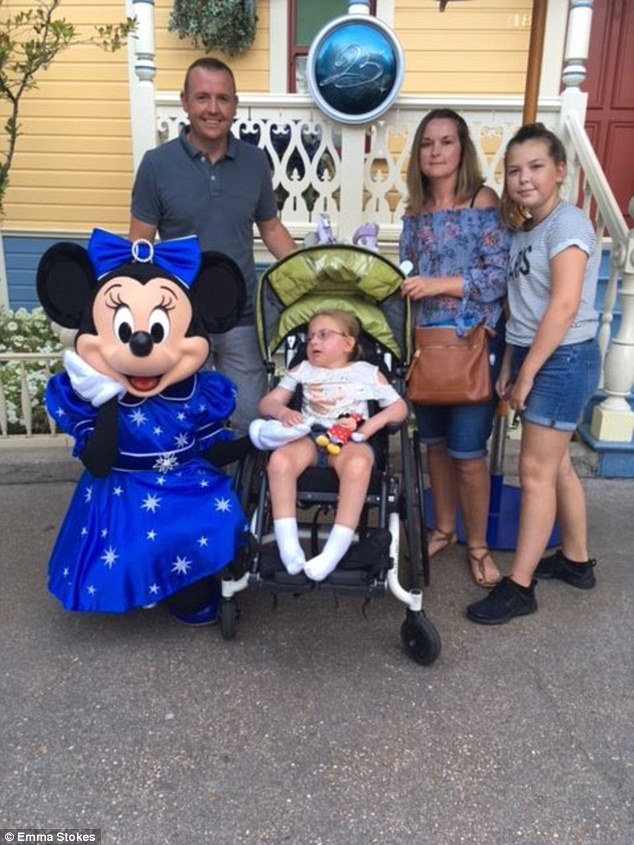 ‘I’m always on watch during the night’: Heartbroken parents have to provide 24-hour care for their 8-year-old daughter battling a rare genetic disorder

Not once did the thought of providing round-the-clock care for their daughter ever cross the minds of Emma Stokes and Richard Dunwell.

But now, every parent’s worst nightmare, is so much more than merely a horrendous dream for the devastated couple.

Megan Dunwell is one of just 65 children globally known to be battling a rare genetic disorder called 8p inverted duplication and deletion syndrome.

Reliant on a wheelchair, Megan has scoliosis, seizures, which are controlled mainly with medications, and problems with spasms.

While the condition isn’t itself life limiting in itself, the associated problems can rob her of precious time.

‘Megan needs 24-hour adult support,’ Ms Stokes, a support worker, said. ‘I’m always on watch during the night, especially if she is poorly.

‘It is hard. You have hopes and dreams for your child. You dream they’ll get married, have children.’

Inverted duplication with deletion of 8p can be known as inv dup del 8p.

It is a rare genetic condition in which there is an extra copy of part of the genetic material that makes up the body’s 46 chromosomes.

Sufferers also have a missing copy of another part of the genetic material.

Born in November 2009 following a normal pregnancy and labour, neither Ms Stokes or Mr Dunwell expected anything was wrong with Megan.

But her eagle-eyed mother soon noticed little differences between new-born Megan and her eldest daughter Ellie, now 13, as a baby.

‘It was hard in the early years,’ Ms Stokes said. ‘We knew of only 24 diagnosed cases in the world back them and there was a real lack of support at diagnosis.

‘Megan had constant appointments and MRI scans. We felt we didn’t know where to go for support and what was available. Now there are 65 cases worldwide.

‘For Richard it took a bit longer to realise this is our life and what that would be. Ellie knows no different and I think Megan has made Ellie a better person.’ 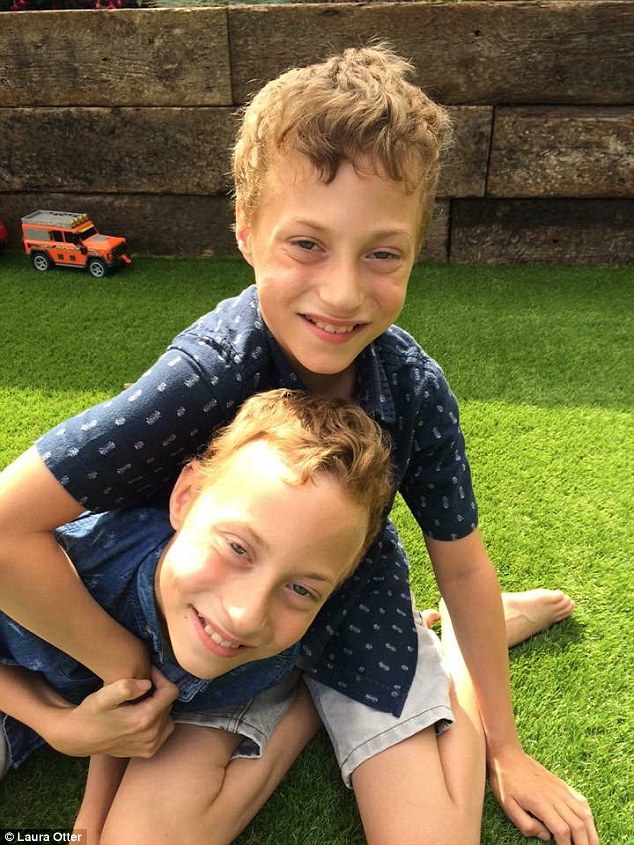 Born with a rare neurological condition, Luis and Kian King were given a brutal ‘death sentence’ by doctors, who feared there was nothing they could do 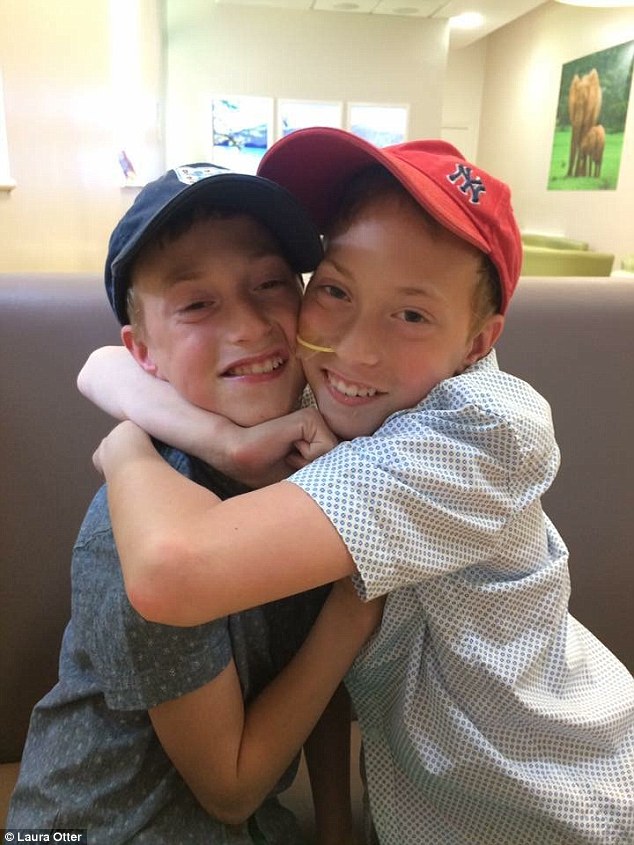 But despite fears they wouldn’t reach their second birthday, the twins have battled through their Krabbe diagnosis – and are now 10

Born with a rare neurological condition, Luis and Kian King were given a brutal ‘death sentence’ by doctors, who feared there was nothing they could do.

But despite fears they wouldn’t reach their second birthday, the twins have battled through their Krabbe diagnosis – and are now 10.

Their heartbroken mother Laura Otter, from Loughborough, has no idea what the future holds for her boys, who will be robbed of their life young.

Speaking for the first time about the time she discovered they had Krabbe, she said: ‘My heart sank because I knew the boys faced a death sentence.

Krabbe strikes around one in 100,000 people, according to estimates by charities.

A gene mutation means sufferers don’t make a special enzyme needed to break down lipids (fats) in the brain.

The lipids build up and break down the myelin sheath that protects nerve endings, leading to nervous system degeneration.

Most children with it are babies and die by the age of two.

‘All the hopes and dreams I had of my kids growing up vanished. I can’t even put into words how it made me feel – it destroyed everything.’

The 39-year-old added: ‘Most children with Krabbe are babies and don’t reach this age, so I don’t know what’s ahead.

‘As long as they have a good quality of life and are happy, I’ll feel okay about the decisions we’ve [she and her partner Ian] made’.

Ms Otter had a nephew who died of Krabbe, which strikes around one in 100,000 people, according to estimates by charities.

Children with Krabbe are not able to create enough of a substance called galactosyl ceramidase, needed to make myelin – essential for the nervous system.

Luis and Kian only began to show signs of Krabbe when they were six – considered unusual as most children with it die by the age of two.

The boys have already undergone three bone marrow transplants between them to try and stop their condition from worsening.

Like other boys their age, Luis and Kian love fighting, playing football, wrestling with each other and computer games.

But they do have some restrictions – as they lose balance easily, they can’t go on climbing frames or slides without support. 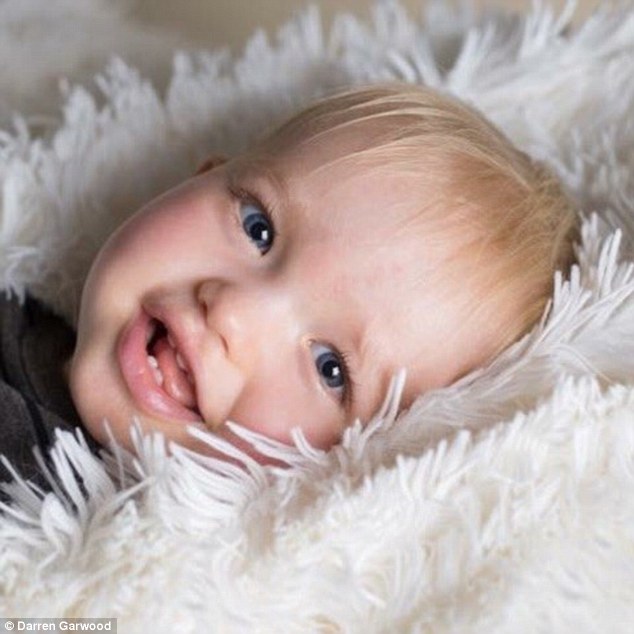 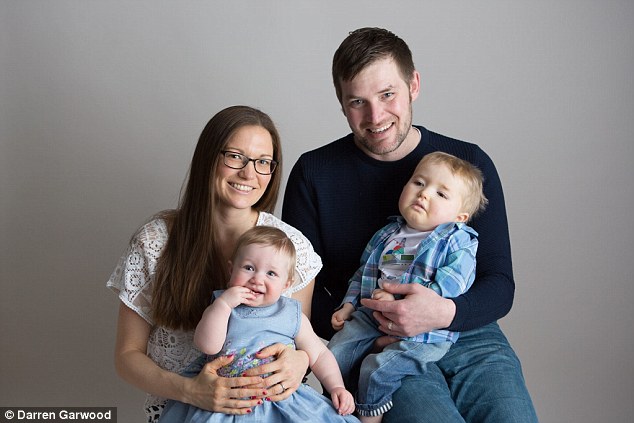 Concerned, his parents Darren, 36, and Rebecca, 33, took him to Basildon Hospital in desperate hope of answers (pictured together, with Jackson’s sister Seren)

Father, 36, writes children’s books based on his dying son having superpowers to keep the 3-year-old’s spirits high

Jackson Garwood seemed like a healthy baby – until he reached 10 months old and suddenly became unable to crawl and use his arms.

Concerned, his parents Darren, 36, and Rebecca, 33, took him to Basildon Hospital in desperate hope of answers.

A series of tests revealed the heartbreaking news that Jackson had the neurological condition Krabbe – and would be unlikely to survive for little over a year.

But despite facing uncertainty over their three-year-old son’s future, his devoted parents are doing everything they can to give him the best start in life.

Mr Garwood, a clerk of works, even took up writing a series of children’s books following the diagnosis, based on the character ‘Jackson the Superhero’.

The tales, aimed at toddlers, are rhyming stories based on the character ‘Jackson the Superhero’.

‘One of Jackson’s favourite past times is reading,’ Mr Garwood said. ‘And the stories are about Jackson having amazing powers at night he doesn’t have during the day.’

Mr Garwood, of East Tilbury in Essex, has since managed to bag himself a publishing deal with Untold Books, and his first book is being published this summer.

‘I’m hoping other parents of children with disabilities can get some enjoyment reading my stories to their child,’ he added.

‘Hopefully, the child might believe that if they go to sleep they’ll go on adventures during the night, like Jackson.’

Jackson’s parents also have a one-year-old daughter called Seren, who was born via IVF to screen for the gene mutations that cause Krabbe.

The family have raised funds for Jackson’s cause, which have been donated towards scientific research to the genetic disease.

And they have even received help from the comedian Russell Brand, who donated funds from a concert to Jackson’s and ‘keeps in contact’. 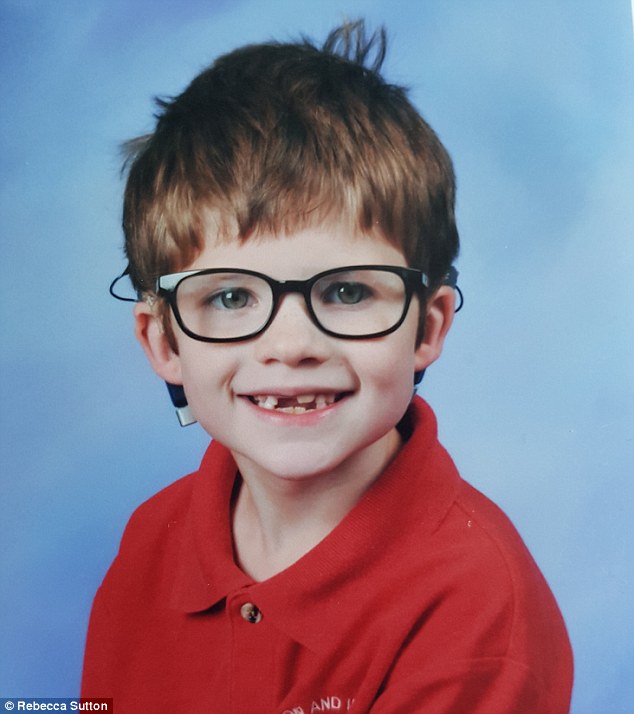 He may be profoundly deaf and losing his vision as each day goes by, but Kaileb Griggs still hopes to become an Olympic swimmer

Boy, 8, who is deaf and quickly going blind because of a rare genetic disorder still hopes to become an Olympic swimmer

He may be profoundly deaf and losing his vision as each day goes by, but Kaileb Griggs still hopes to become an Olympic swimmer.

The eight-year-old is battling a rare genetic disorder called Usher 1B syndrome, which causes deafness and blindness in those it strikes.

WHAT IS USHER 1B SYNDROME?

Usher syndrome is named after the British eye surgeon who first described it in 1914.

It is a rare, inherited disorder that causes deafness and gradual vision loss. It can also affect balance.

Scientists have identified 3 types of Usher syndrome (1, 2 and 3). Around 9,750 people are thought to be affected in the UK, according to estimates.

Babies with Usher syndrome are born deaf or hard-of-hearing. The vision loss develops during childhood or adolescence.

The different types of Usher syndrome are divided by the degree of hearing and vision loss, the age when vision loss occurs and how quickly it progresses, and whether balance problems are present.

But the brutal condition, which affects one in 25,000 people, hasn’t dashed Kaileb’s dreams of representing team GB at swimming later in life.

And despite suffering from balance problems due to his condition, he is active, talkative and is performing well at school.

A keen piano player, Kaileb, from Cambridge, was diagnosed as profoundly deaf in the early weeks of his life.

Doctors fitted him with two hearing aids at just eight weeks of age, followed by cochlear implants to give him some access to sound.

It wasn’t until Kaileb turned six that his parents Rebecca Sutton and Jason Griggs were told he was born with Usher 1B syndrome.

‘So it was devastating to then find there was a much bigger life-changing loss of sense silent’y happening.’

Ms Sutton, 40, can vividly remember the day a consultant from Addenbrooke’s Hospital told her Kaileb was going blind.

‘They call it “progressive loss of vision”, which seems so cruel,’ said Ms Sutton.

‘That makes it sound as though he’ll be old when he’s blind. In fact, he’ll have lost his vision by his teens.’

Jeans for Genes Day takes place on Friday 21st September. To sign up for your free fundraising pack visit www.jeansforgenesday.org

What Do Those Blood Pressure Numbers At The Doc's Office Even Mean?

Creating a low-cost ventilator for all

90 Day Fiance: The Other Way's Deavan Clegg Reveals Her Lip Was 'Dying' After Getting Fillers

Does obesity increase risk of being a bullying victim, perpetrator, or both?

3 expert-approved ways to get rid of nasty tension headaches

Eating after 6pm could be bad news for your heart

Being vaccinated doesn’t mean you must go maskless. Here’s why.