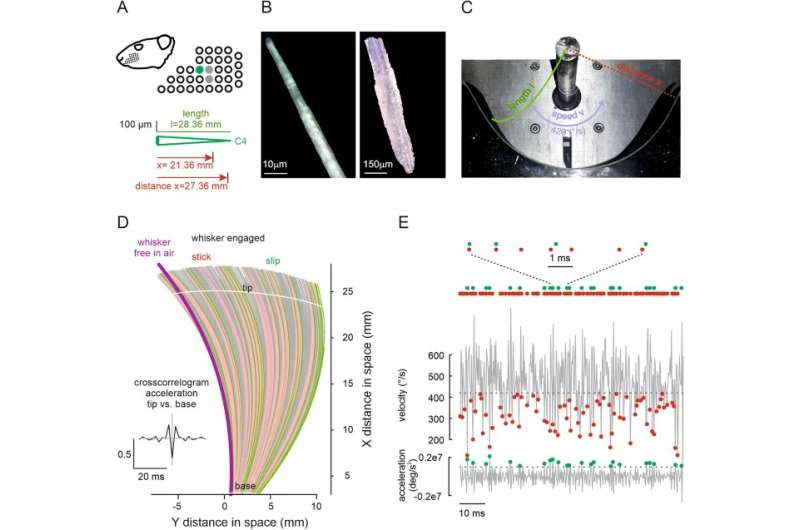 How we sense texture has long been a mystery. It is known that nerves attached to the fingertip skin are responsible for sensing different surfaces, but how they do it is not well understood. Rodents perform texture sensing through their whiskers. Like human fingertips, whiskers perform multiple tasks, sensing proximity and shape of objects, as well as surface textures.

By carrying out high precision laboratory tests on a real rat whisker, combined with computation models, the researchers found that whiskers act like antennae, tuned to sense the tiny stick-slip motions caused by friction between the surface and the tip of the whisker.

“One of the most striking things we found both in the experiments and the theory was the thousand-fold amplification of tiny force signals perceived by the tip of the whisker to that received by the neurons at the whiskers base. Suddenly we realized that the whisker is acting like an amplifier, taking micro-scale stick-slip events and rapidly turning them into clean pulses that can be picked up and processed by the brain,” said Professor Alan Champneys from the University of Bristol, co-lead of the modeling work with colleague, Dr. Robert Szalai. Dr. Thibaut Putelat carried out the detailed numerical modeling.

The research Conveyance of texture signals along a rat whisker, published in the journal Scientific Reports from the publisher Nature, reveals the tapering of the whisker has the effect of amplifying tiny high-frequency motions into appreciable pulse-like changes in forces and movement at the whisker follicle. In turn, the nerve cells in the follicle sense these changes and transmit them to the brain.

“It is almost as if the morphology of the whisker is designed to convey these friction-induced signals as “AC” waves on top of the “DC” motion of the whisker that conveys the information on surface proximity and hardness.

“These AC waves are too small and too rapid to be perceived by the human eye. However, in approaching this problem in a multidisciplinary fashion, we have been able to reveal these waves with clarity for the first time,” said Professor Champneys.

“The findings have implications for human touch too, where the morphology of finger-print ridges is more complex, but might similarly distinguish between AC and DC signals as our brain tries to disentangle multiple information streams about what we are feeling,” said Dr. Maysam Oladazimi, who carried out the experiments as part of his Ph.D.

The findings could have far-reaching benefits including how textures could be designed to provide optimal cues for the visually impaired, for human safety operation in low light environments, or for immersive artistic installations.

“This research opens several avenues for future work. As neuroscientists, we are interested in developing a more detailed understanding of neural signaling pathways in texture discrimination, while our colleagues in Bristol are keen to explore implications for the design of future robotic sensing systems,” said Professor Cornelius Schwarz, who led the experiments at the University of Tuebingen.

Professor Champneys said the research was of particular value to haptic-sensing in the field of robotics, where robots literally feel their environment and is the focus of much current research, especially for robots that need to act autonomously in the dark, such as in search and rescue missions. Professor Nathan Lepora and colleagues at the Bristol Robotics Laboratory are pioneers in this field.

The number one killer of women

How To Be A Fitness Lifer

Bed bug bites: How to avoid them and get rid of an infestation – be wary of this smell