The woman with NO vitamin D: 58-year-old loses 20cm in height, breaks bones and endures crippling pain due to a never-before-seen mutation that prevents her absorbing the ‘sunshine supplement’

A 58-year-old woman has virtually no vitamin D in her blood due to a never-before-seen genetic mutation.

The woman – who has not been named – went to her doctor complaining of pain in her back, neck, shoulders and hips, which she had endured since she was a teenager.

She had also lost 20cm in height over the years, as well as enduring broken ribs, arms and hips after minor falls.

A blood sample revealed the woman – who lives in Canada – had ‘almost undetectable levels of vitamin D’.

A DNA test showed she does not carry a gene that enabled the vitamin to be transported by the blood.

Her parents – who were second cousins – were both carriers of this gene, with her inheriting the ‘faulty’ DNA from them both.

Treatment with oral and injectable vitamin D over many years helped boost her vitamin D levels, but they have never reached normal amounts. 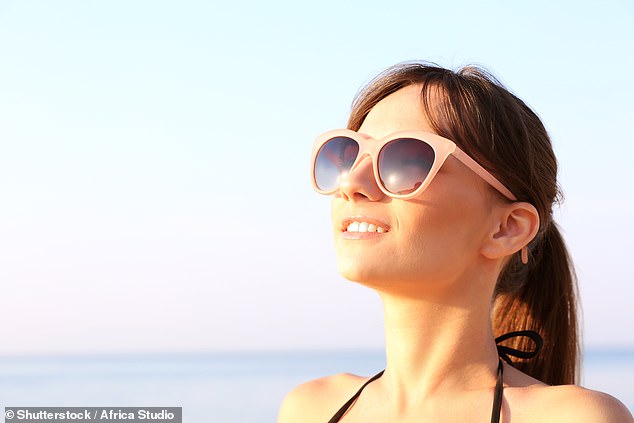 The incident was written in the New England Journal of Medicine by researchers from the division of medical genetics at the University of Calgary.

Vitamin D is essential for bone health. Known as the ‘sunshine supplement’, its main source is UV light, however, it is also found in oily fish, mushrooms and fortified foods.

How vitamin D travels around the body is unclear, however, it was thought to attach to a binding protein that enables it to enter cells.

‘The idea has always been that without its binding protein, vitamin D couldn’t get to the cells where it’s needed,’ study author Dr Julien Marcadier, a clinical geneticist, said. ‘Our findings call that into question.

‘To our surprise, she’s maintained normal calcium levels despite having no measurable vitamin D.

‘This tells us the vitamin D she has in her system does in fact get to its target cells, though how exactly that happens is still unknown.’

The woman – who does not have children – first came to the doctors’ attention when she moved to Canada from her native Lebanon aged 33.

Medics noted she had ‘marked’ curvature of the spine, as well as poor movement in her back, shoulders and hips.

Her condition became worse over time, despite her taking anti-inflammatory drugs and doing physiotherapy.

This helps to prevent the body from mistakenly attacking healthy cells and causing autoimmune conditions, like arthritis.

Yet, as the painful joint condition reduces a sufferer’s vitamin D sensitivity, patients may not benefit from taking such supplements once the disorder has already developed, according to the researchers.

Or they may require higher doses.

Study author Dr Louisa Jeffery, from the University of Birmingham, said: ‘Our research indicates that maintaining sufficient vitamin D may help to prevent the onset of inflammatory diseases like rheumatoid arthritis.

‘However, for patients who already have rheumatoid arthritis, simply providing vitamin D might not be enough.

‘Instead much higher doses may be needed’.

She also broke her bones after minor injuries.

‘She had a number of fragility fractures, little falls where the average person wouldn’t expect to break a bone,’ Dr Marcadier said.

And giving her vitamin D supplements had no effect.

‘No matter how much or how often they gave her vitamin D, the levels wouldn’t budge above zero,’ Dr Marcadier said.

These are measured as T-scores relative to the levels of a healthy 30-year-old. A normal score is -1 or above, with -1 to -2.5 being low.

A DNA analysis revealed she has a ‘deletion’ in the gene that codes for the protein that vitamin D binds to.

This left her with ‘severe vitamin D deficiency’, with levels of the nutrient being ‘almost undetectable’.

The woman – who is one of seven children – is thought to be the only one of her brothers or sisters to suffer from the deficiency.

She even had just 0.4 per cent of the vitamin D levels of one of her healthy siblings.

Despite the severity of her condition, the woman did not suffer from osteoporosis but did have osteopenia, which is considered the half-way point between osteoporosis and healthy bones.

She also never developed rickets as a child or osteomalacia as an adult, which are known to be triggered by insufficient vitamin D.

And the woman only suffered her first fracture at 41 when she broke her ribs, before going on to fracture her feet, left forearm and right hip in separate incidents.

The woman did not initially respond to vitamin-D supplements, however, over many years, her levels gradually started to rise due to a combination of oral and intramuscular injections.

The researchers believe this case report opens up new avenues into how vitamin D works in the body.

There are infinite ways to have sex, and there’s nothing unnatural about any of them

Not only seniors, but also young adults are often lonely