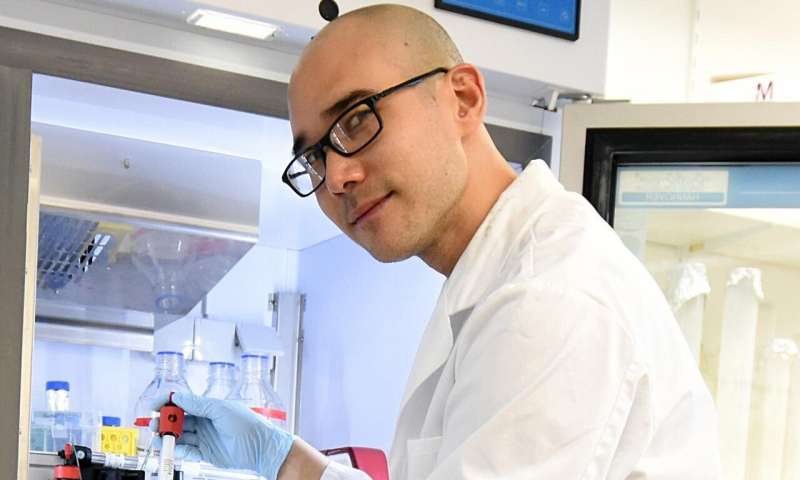 Most cancers are caused by a large variety of factors that vary from one person to another. To unravel this complexity, genes that contribute to the development of a respective cancer must be identified. Such genes are called oncogenes. A good example of an oncogene is CDK8: Cyclin-dependent kinase 8. Misregulated CDK8 is an important factor in the development of colon, breast and skin cancer. Hence, in recent years considerable efforts have been undertaken to develop drugs that specifically target CDK8 and that do not affect other molecules that are closely related to CDK8, but are essential for the survival of human cells. A research team at the University of Bayreuth led by biochemist Dr. Claus-D. Kuhn has now discovered how CDK8 is activated in healthy humans. The research results are published in the journal Proceedings of the National Academy of Sciences U.S.A. Apart from novel basic biochemical insights, the presented results suggest a new method by which CDK8-specific inhibitors could be developed in future.

The research team was mainly interested in how the oncogene CDK8 is activated in healthy cells. “One important aspect is that CDK8 does not occur in our cells as an individual molecule, but always in a complex with three partners. As part of this complex, CDK8 has completely different properties, which is why it is essential to investigate CDK8 as part of this complex,” explains the first author of the study, the Bayreuth graduate student Felix Klatt. Using structural biochemistry—coupled with systems biology—the research team deciphered how CDK8 is activated by two of the three partners, Cyclin C and MED12. They demonstrated that just a tiny part of MED12 is responsible for activating CDK8. Due to its structure, the Bayreuth scientists named this part ‘MED12 activation helix.’

The MED12 activation helix is often mutated in tumours

“After we discovered the MED12 activation helix, we were very surprised to find a large number of mutations associated with uterine fibroids, breast cancer and chronic lymphatic leukemia in this very area,” reports Dr. Claus-D. Kuhn, head of the Bayreuth research team “Gene Regulation by Non-coding RNA,” which is part of the Elite Network of Bavaria. “To be honest, the extent of agreement between our basic biochemical research and the sequence analysis of human tumours was unexpected.” Through subsequent biochemical experiments, his team was able to show that the mutations do not lead to a destabilization of the CDK8-containing complex, as previously suspected. Rather, there is a spatial rearrangement of the MED12 activation helix within the complex, which leads to an abnormally reduced activity of CDK8—a condition that most likely contributes to tumor development.

UK charity makes breakthrough in eliminating one of the world’s oldest, deadliest diseases

Eating a lot of junk food this Holi? Here are some foods to help you reboot your gut