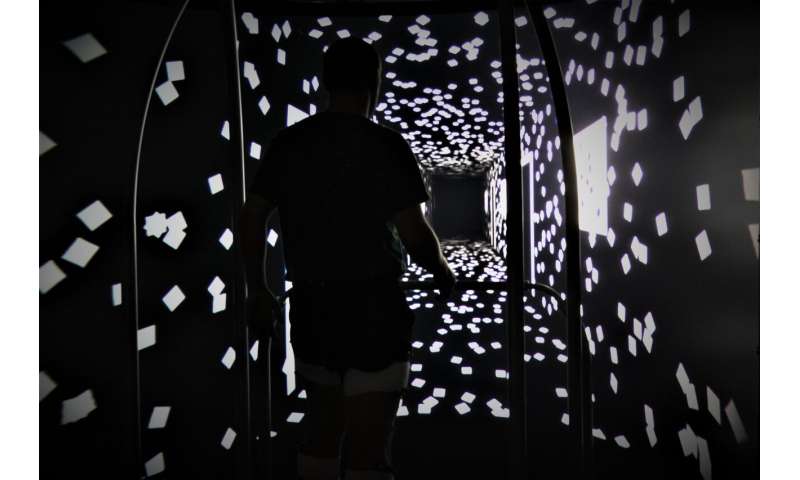 People with multiple sclerosis (MS) often have a greatly increased risk of falling and injuring themselves even when they feel they’re able to walk normally. Now a team led by scientists from the UNC School of Medicine has demonstrated what could be a relatively easy method for the early detection of such problems.

The researchers, in a study published in PLoS One, used a virtual reality (VR) system to trick subjects into thinking they were falling as they walked on a treadmill. The scientists found clear differences in reactions between people with MS and people of the same age without MS. These differences were not evident between the groups when they walked in a normal way without the “falling” illusion.

The researchers believe that a VR-based test like this, after further study and development, could be made portable and used widely in neurology clinics to alert MS patients earlier to their balance impairments, allowing them to adopt measures to reduce their risk of falling.

“Our promising results suggest that one can use VR to detect balance problems that usually go undetected until the individual starts experiencing real falls at home or work,” said study principal investigator Jason Franz, Ph.D., assistant professor in the UNC/NC State Joint Department of Biomedical Engineering.

MS is a brain disease that affects about 400,000 people in the United States and more than 2 million worldwide. It’s widely thought to be caused by inappropriate immune cell activity in the brain and features the loss of the insulating layer of myelin protein around nerve fibers—a loss that degrades the fibers’ abilities to conduct nerve signals. Signs and symptoms of MS include fatigue, numbness and tingling, cognitive impairments, mood instability, and balance and gait problems.

The latter can manifest unexpectedly. People who have MS and show little or no disability may already be at twice the risk of falling, on average, compared to people who don’t have MS. Studies also have found that people who have an MS diagnosis fall at least once per year on average. Many of these falls occur during activities such as walking.

Franz and his colleagues sought to develop a test that would reveal balance and gait impairments even in people with MS who may not be aware of these problems or display them during normal walking.

“When we walk around, our brains use a variety of sensory feedback channels, including force sensors in our feet, to guide our movements and make corrections from one step to the next,” Franz said. “But in people with MS, those force sensors can become less reliable, so people need to rely more on other channels, especially vision.”

Franz and colleagues employed a VR device that allows the experimental manipulation of visual perception. Their laboratory device is a like a semi-circular theater screen that subjects watch while walking on a treadmill. The VR scene depicted a hallway down which the subject seemed to be walking, at the same speed that the subject walked on the treadmill. Sometimes side-to-side wobbles in the scene created the illusion for each subject that he or she was becoming unstable, triggering a corrective reaction that could be measured as a change in gait and foot placement. Franz’s hypothesis was that the MS subjects with balance impairments would differ clearly from normal subjects in these corrective reactions.

The scientists tested 14 people with MS and 14 age-matched non-MS participants. They found that there was indeed a clear difference between the groups in their reactions, but this only became clear when using the VR balance challenge.

“During normal walking without VR—even with our sophisticated lab equipment including a battery of 3-D motion capture cameras—we could not effectively distinguish people with MS from the healthy, age-matched individuals,” Franz said. “So this perturbed-walking approach could have a lot of important clinical and translational applications.”

He and his colleagues now are adapting their system for use with consumer-grade VR headsets as a routine diagnostic tool to be used in neurologists’ clinics to detect balance impairments that would otherwise go unrecognized.

Not a myth: cow’s milk and beef as a cancer trigger

The Coolest Subscription Boxes for Kids Who Love Getting Mail