Bodybuilder, 39, is told she has 12 months to live after a lump on her ankle turned out to be CANCER which has spread to her lungs

A bodybuilder who discovered a strange lump on her ankle has been diagnosed with terminal lung cancer and given 12 months to live.

Nikki Jenkins, from Aintree in Merseyside, said she had no other symptoms apart from what looked like a ‘second ankle bone’.

But when she got medical help, hospital doctors discovered the lump was actually a rare type of tumour called a pleomorphic rhabdomyosarcoma.

Ms Jenkins had surgery to remove the lump but, just a few months later, she was told the cancer had returned and spread to her lungs and was now incurable.

Told she may have just 12 months to live, Ms Jenkins is now having chemotherapy and searching for private treatment to try and extend her life. 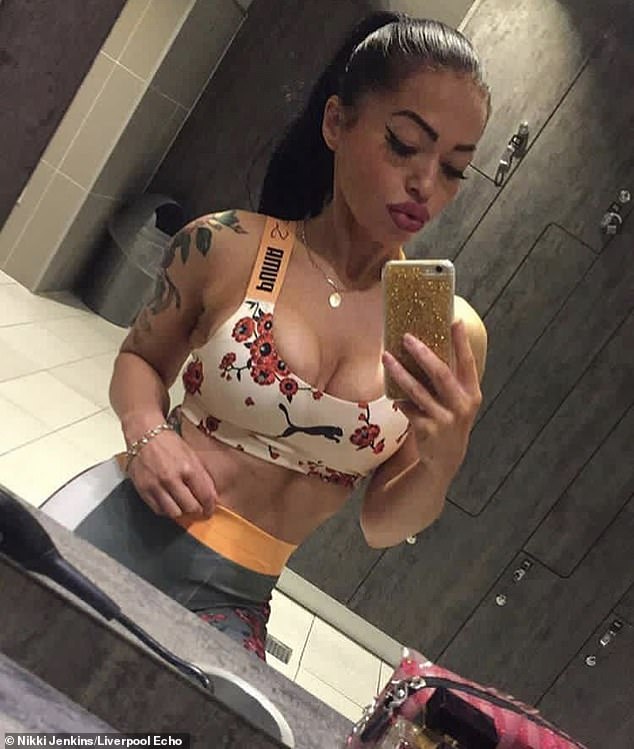 Nikki Jenkins, from Aintree, works as a bikini fitness athlete and said she felt perfectly healthy until she noticed the lump on her ankle and it wouldn’t go away on its own 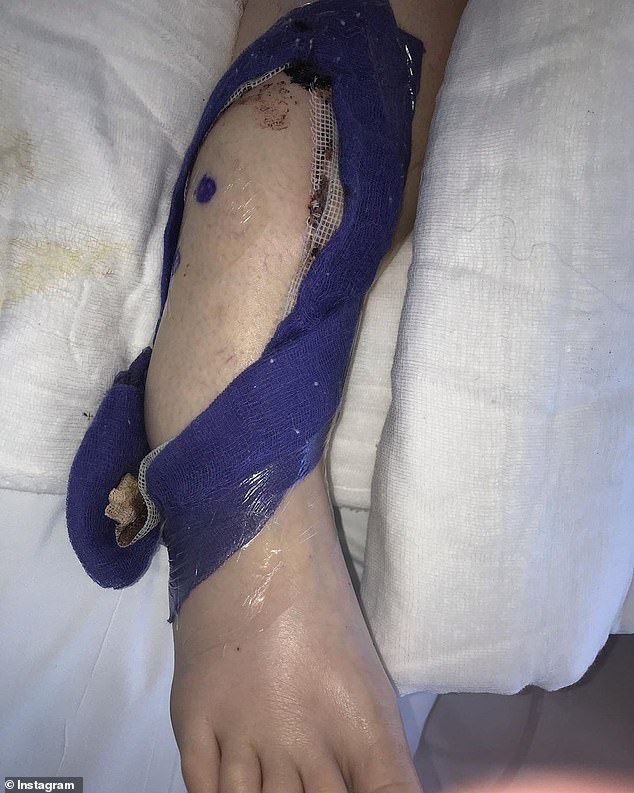 Ms Jenkins had surgery to remove the lump from her ankle in September and was given the all-clear, but the disease later returned

Her first A&E visit in January led doctors to think the lump on her ankle was a cyst and they said it would disappear on its own.

But when it didn’t, she went back and in May medics did further tests including X-rays and a biopsy.

It was these which revealed she had cancer, she told the Liverpool Echo.

Pleomorphic rhabdomyosarcoma is a type of sarcoma – a tumour in the soft tissue, which can develop almost anywhere in the body.

It makes up fewer than two per cent of all sarcoma cases so is likely only diagnosed around 100 times each year in the UK.

Symptoms include persistent lumps; headaches and feeling sick; bleeding in the urine, throat, nose, vagina or rectum; or abdominal pain.

In the weeks that followed, Ms Jenkins had an operation to remove the tumour, followed by a nine hour operation in which skin was taken from her thigh to cover the hole in her ankle where the tumour had been.

And in September, after completing radiotherapy for the cancer, Ms Jenkins was given the all clear at Clatterbridge Hospital in Wirral.

But only weeks later – on October 31 – a routine check-up revealed the cancer had survived and spread to her lungs. Doctors said she could have just a year to live.

‘I’ve got no symptoms. If I hadn’t had to go to the doctors for check ups because of the tumour in my ankle I would have been completely unaware.

‘I’ve got no breathing problems, I’ve been running in the gym and doing normal stuff.

‘When they told me I was really shocked. I’d expect someone with lung cancer to be coughing all the time and look ill but I’m not.’

Rhabdomyosarcoma is a tumour of the soft tissues.

It affects less than 60 children in the UK every year, most of which are under 10 years old.

The most commonly affected areas are the head and neck, bladder, testes, uterus or vagina.

Its cause is unknown.

The most common symptom is swelling with other signs of the condition depending on where the tumour develops.

If in the head or neck, it can cause eyes to swell and nasal discharge. In the abdomen can result in pain and constipation, while tumours in the bladder can lead to blood in the urine or difficulty urinating.

Treatment depends on the tumour’s size and location, as well as whether it has spread. It may involve chemo or radiotherapy and surgery.

Despite the diagnosis and the limited options available to her, Ms Jenkins is now searching for a treatment through private health care.

She said: ‘I said to [doctors] “if I don’t do anything what happens?” and they said I would have a maximum of 12 months to live, so I started chemotherapy the following week.

‘When I’ve been looking into it I’ve found a couple of different options for treatments but they’re only available privately which is expensive.

‘So far I’ve found an immunotherapy and a proton therapy for my type of cancer but they are only available privately.

‘I need to work out what the best course of action is to take. I’m trying to deal with having chemo and the emotional impact it’s having on my family and doing the research on top.’

Ms Jenkins, who works as a a professional bikini fitness athlete, said she has always been passionate about health and fitness and regularly travels the world to compete in bikini bodybuilding competitions.

The side effects of chemotherapy have started to take their toll on her body, from which she makes her living.

She said: ‘I said it wasn’t going to bother me when my hair comes out during the chemo but when it actually happened I was so upset.

‘It happens so fast after having it. You’re just brushing your hair and it comes out. I never imagined being ill like this.

‘Being told that you could be dead in 12 months’ time is grim.’

Ms Jenkins’s niece, Keely Ray, 24, said her and all the family have been left devastated by Ms Jenkins’s diagnosis but they are ‘determined not to give up’.

‘Nikki’s whole life has been dedicated to health and fitness,’ Ms Ray said.

‘She’s travelled around the world with her career, competing in bikini bodybuilding competitions.

‘She’s always in the gym and eats healthy and has an amazing physique so for this to happen is a massive shock.

‘But she’s been so strong about it all. She’s determined to find a treatment and none of us are going to give up.

‘We’re going to do a lot of different fund raising as a family and if people can give anything like can and if not if they can share it we’d be so grateful.’

The family are raising money on JustGiving and have a target of £50,000.

Covid survivors say they now have 'bizarre' tastes and smells

12 knock-knock jokes your kids will love to hear

Genevieve Gorder On Living With Lyme Disease and Hashimoto's: 'If I Didn't Rest I Would Break'

Microfiber Vs. Cotton Sheets: Which Is Better For A Sweaty Sleeper?