Woman, 32, who dismissed her exhaustion and headaches for divorce stress was horrified to discover they were signs of blood cancer and she had just 48 HOURS to live

A woman discovered she had just two days to live after she mistook symptoms of leukaemia for signs of divorce stress.

Kate Stallard, 32, who separated from her husband of 18 months in the summer of 2016, thought her headaches and exhaustion were the result of her adapting to single life until she collapsed in the middle of the night.

After being diagnosed with acute promyelocytic leukaemia, Ms Stallard was told the cancer had weakened her immune system so much she had developed life-threatening sepsis and would die within days unless she started chemotherapy.

Kate Stallard’s condition was so severe she did not have time to freeze her eggs before initiating treatment, which has left her infertile, forcing her to give up her hopes of being a mother.

After enduring three rounds of chemotherapy that left her hospitalised for six weeks, Ms Stallard was told she was in remission, only to discover the cancer had returned to her central nervous system, forcing her to undergo a further 17 weeks of chemo.

Although happy to now be cancer free, Ms Stallard, from Worcestershire, has revealed she is grieving the loss of ever having children of her own.

She is now speaking out to raise awareness of the symptoms of leukemia. 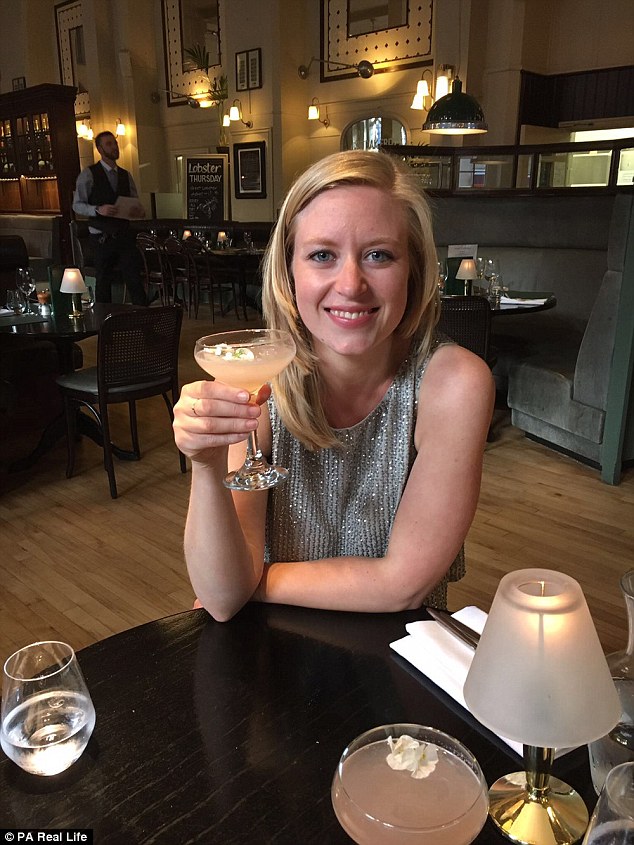 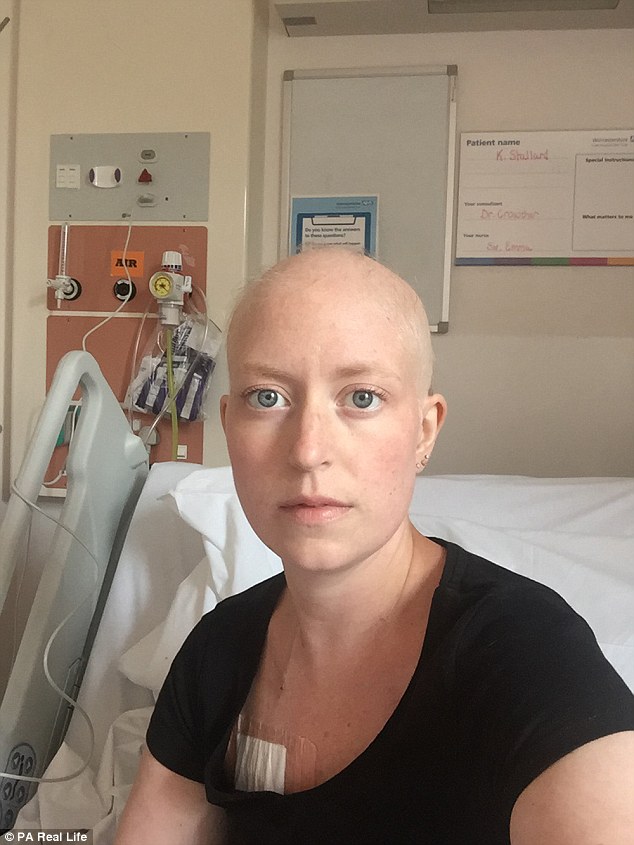 After being diagnosed with acute promyelocytic leukaemia, Ms Stallard was told she would die within two days unless she started chemotherapy (pictured during treatment) 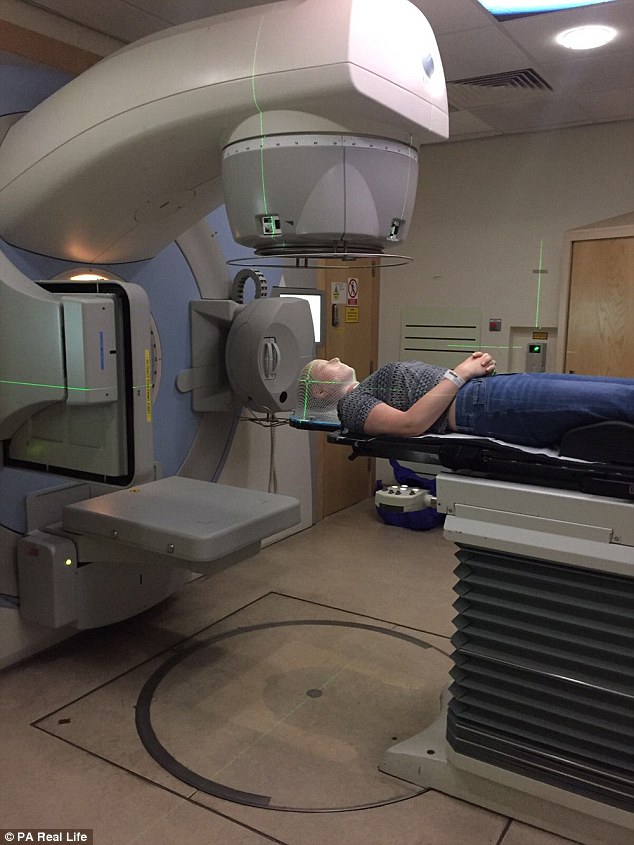 Ms Stallard underwent cranial radiotherapy to prevent her cancer entering her brain (pictured during treatment), however, after entering remission, the disease returned to her central nervous system. She was then forced to endure 17 more weeks of chemotherapy

WHAT IS ACUTE PROMYELOCYTIC LEUKAEMIA?

APML accounts for around 10 -15 per cent of all cases of AML.

The myleloid cells perform a number of different functions, such as fighting bacterial infections, defending the body against parasites and preventing the spread of tissue damage.

In APML a change in a specific chromosome leads to a changes in white blood cells called Promyelocyte cells, which means they do not progress to maturity.

This leads to a bleeding disorder due to abnormal clotting.

The symptoms include pale skin, tiredness, breathlessness, frequent infections, and unusual and frequent bleeding, such as bleeding gums or nosebleeds.

The main treatment for AML is chemotherapy, which is used to kill as many leukaemia cells in your body as possible and reduce the risk of the condition coming back (relapsing).

In some cases, intensive chemotherapy and radiotherapy may be needed, in combination with a bone marrow or stem cell transplant, to achieve a cure.

Studies have shown that people with acute promyeloid leukaemia (APML), around 85 per cent will live for at least five years with treatment.

‘I put it down to the emotional toll of the divorce’

Speaking of her separation, Ms Stallard said: ‘It was a really stressful time, and very difficult to try and survive it all.’

Determined to stay positive, Ms Stallard, who had been in a relationship with her husband for 10 years, began going to the gym more often in an attempt to boost her energy levels and improve her mood.

Yet despite her best efforts, Ms Stallard constantly felt exhausted and even needed breaks while walking her dogs, saying: ‘For two months, I put it down to the emotional toll of the divorce.

‘I started getting throbbing headaches too, where I could literally hear my heartbeat.

‘I was working out a lot, but so tired that I wasn’t getting any fitter no matter how much I trained. I put a lot of it down to divorce stress.’

Then, in September 2016, just days before her diagnosis, Ms Stallard started her period, which was unusually heavy.

She said: ‘It just wouldn’t stop. It was almost like a haemorrhage.’

Beginning to panic, Ms Stallard visited a doctor, saying: ‘I’d spoken with a relative who’d had aplastic anaemia, a rare bone marrow disease, so I thought it’d be something like that, or perhaps even a virus.

‘I assumed I’d go to the doctor and be sent off with some antibiotics.’

After being checked over, Ms Stallard asked if she could have a blood test, just to be sure.

Yet, due to her being classed as a non-urgent case, she was told she would need to wait a week for an appointment to become available. 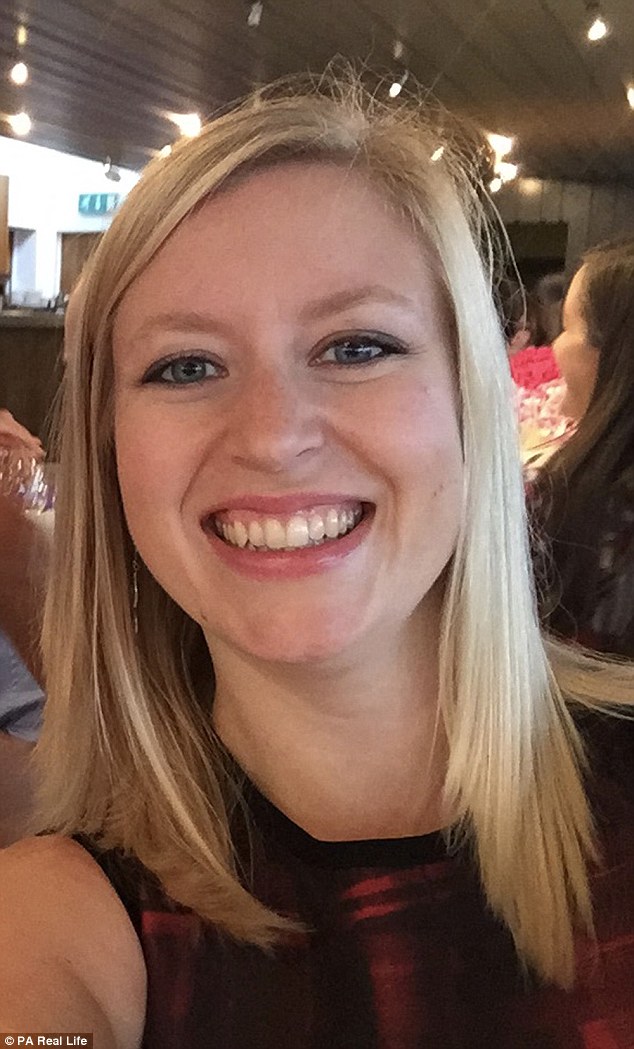 Told to go to A&E urgently

Just two days later, Ms Stallard rapidly went downhill, as she recalls crawling up the stairs to her bathroom.

Terrified she would pass out with nobody to find her, Ms Stallard called NHS 111, which organised for her to have an emergency appointment in the middle of the night.

She said: ‘I got there about 1am. They took one look at me and knew something was really wrong.

‘They examined all my bruises and took more bloods, which they sent off to be urgently tested.

‘I went home to wait for the results, and around two hours later, my phone rang again with the doctor telling me I was seriously ill and needed to get to A&E fast.’

From there, Ms Stallard’s sister Lindsay, 37, drove her to Worcestershire Royal Hospital, where a team of doctors and nurses were waiting.

Taken straight into isolation, she was given a blood transfusion while they ran further tests, including a bone marrow biopsy.

A few hours later, doctors broke the news she had leukaemia and sepsis.

Ms Stallard said: ‘I’d been panicking, realising something was very wrong, but I still never thought it could be cancer. Being diagnosed was absolutely terrifying. My world fell apart.

‘After the night I went to hospital, I didn’t leave for six weeks. Doctors told me if I hadn’t started treatment right away, I would have only had a couple of days left to live.’

Speaking of her sepsis diagnosis, Ms Stallard added: ‘Where my immune system was so weakened by the cancer, I must have picked up other bugs, which had then developed into a type of sepsis as my body attacked itself.’

Due to her requiring urgent care, Ms Stallard was unable to go home, with her remaining in hospital while doctors ensured she was strong enough to begin chemotherapy in two days’ time.

She said: ‘I was told the type of chemotherapy drug I was to have can affect fertility. One of my first questions was, “can I freeze my eggs?”

‘But doctors told me that the process takes a few weeks and I wouldn’t survive it. It was devastating.

‘I held on to the hope that the chemotherapy may not do that much damage, but I have since gone for fertility tests and it wasn’t possible to harvest any eggs.

‘That’s been one of the hardest parts and most horrific side effects for me. I know adoption and so on is an option, and that I had to have the treatment to stay alive, but I still need to grieve.

‘One of the things that helped get me through my divorce was that I’m still young, so there was time to meet someone else and start a family.’ 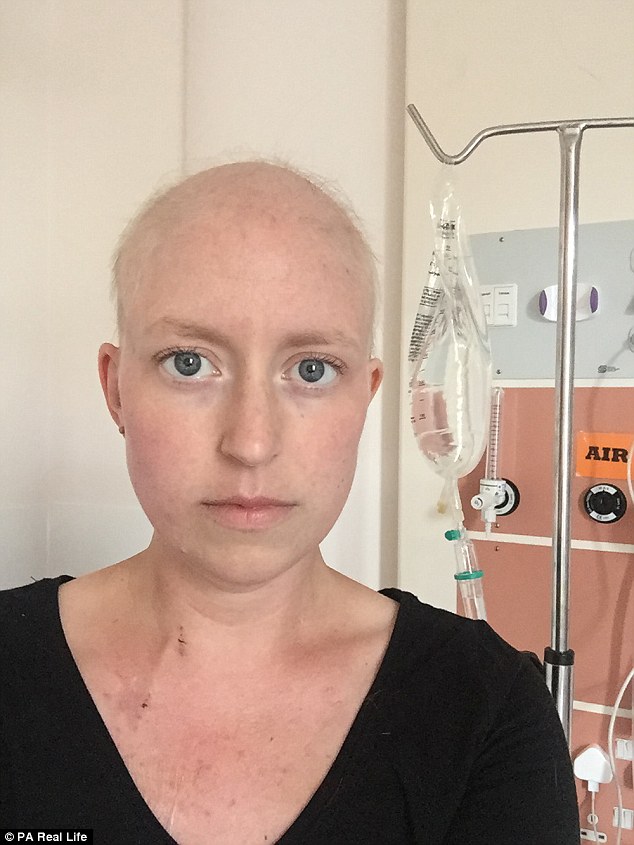 After collapsing in the night and finally being diagnosed, Ms Stallard started treatment immediately, with her enduring three rounds of chemotherapy during a six week hospital stay 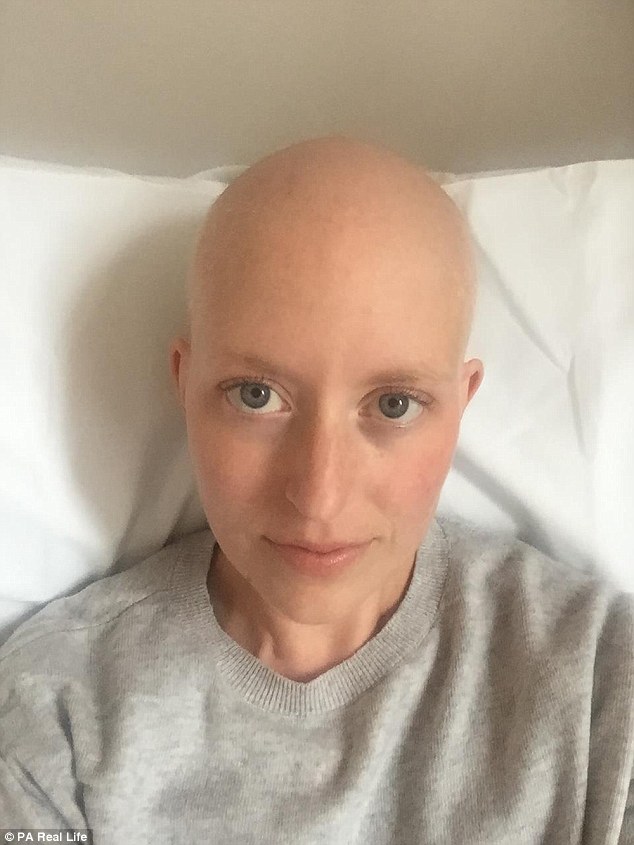 Treatment needed to start straight away, with her having no time to freeze her eggs. Due to chemo reducing a patient’s fertility, Ms Stallard’s hopes of being a mother were dashed 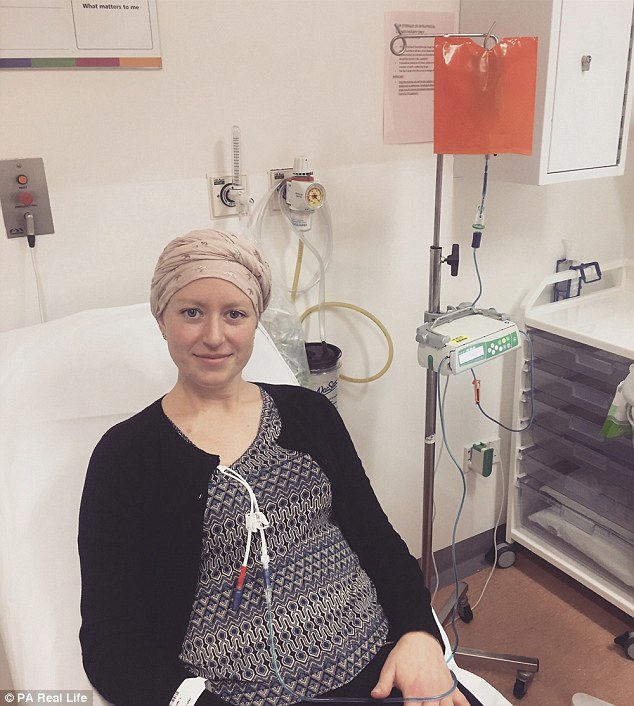 After entering remission, Ms Stallard was forced to endure chemotherapy all over again when her eyesight became blurred, with tests showing she had cancer of the central nervous system 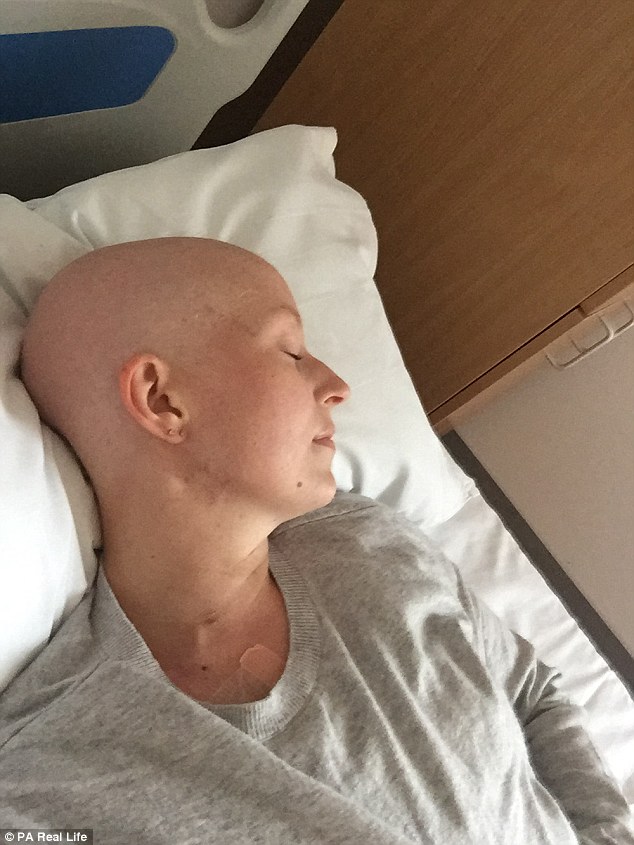 Ms Stallard had a further 17 weeks of chemo, as well as a stem cell transplant 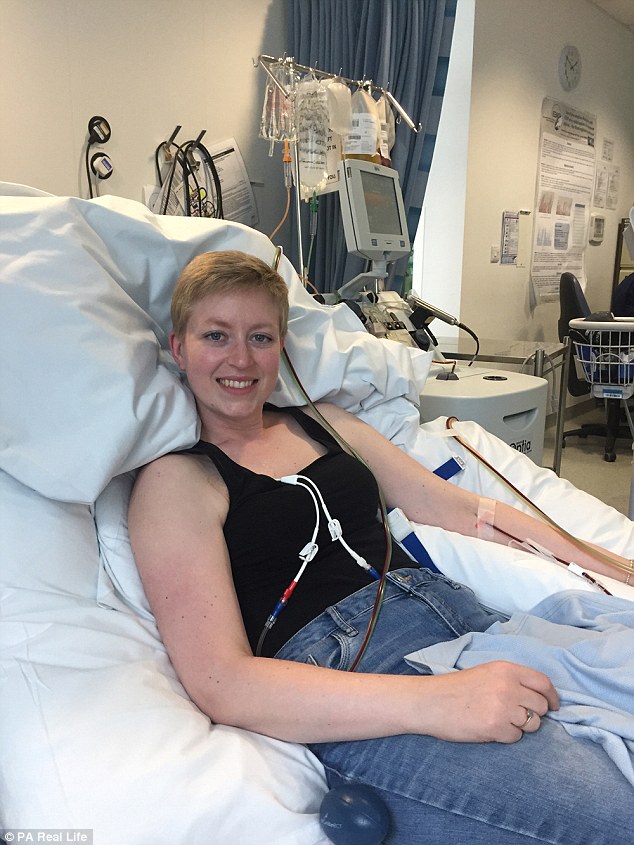 She has been in remission since August 2017, with her undergoing scans every three months

‘The cancer had returned and was in my central nervous system’

Ms Stallard endured three rounds of chemotherapy before being told she was in remission.

Yet, the good news was short lived, with her health declining again in February last year.

She said: ‘I was suffering with double vision, and my right eye began to turn in on itself.

‘It transpired the cancer had returned and was in my central nervous system.’

This time Ms Stallard endured 17 weeks of chemotherapy, where drugs were injected into her spinal fluid via a lumbar puncture, followed by a stem cell transplant.

She has been in remission since August last year, with her undergoing scans every three months.

Ms Stallard is working closely with the charity Leukaemia Care’s ‘Spot Leukaemia’ campaign to raise awareness of the signs of the disease via special symptoms cards, which can be ordered from their website and shown to doctors.

She said: ‘Leukaemia Care are a fantastic charity and together we want to let people know of the symptoms to watch out for.

‘If you’re experiencing anything at all that doesn’t feel right – breathlessness, unexplained bruising, night sweats, bleeding or persistent infections – don’t be afraid to be open and honest with your doctor, and push for a blood test.’ 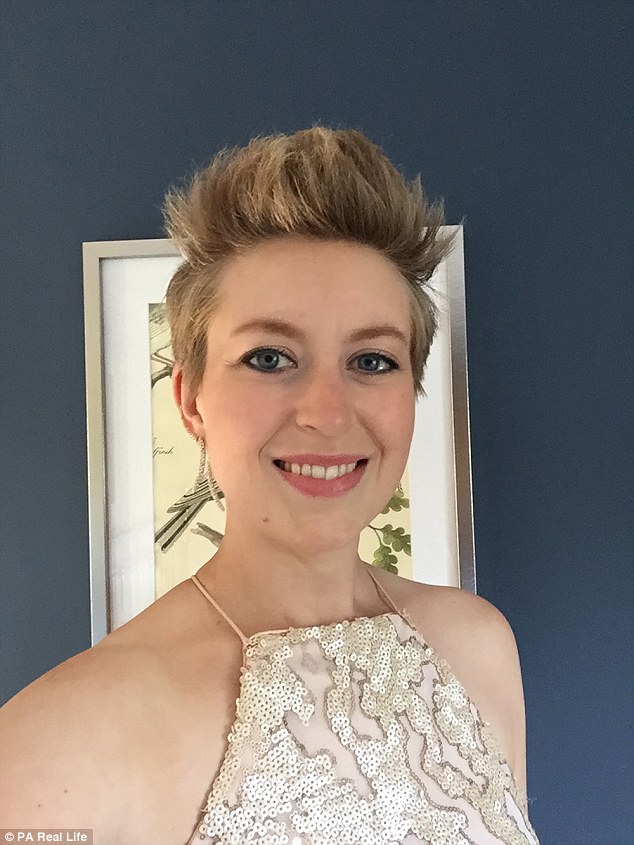 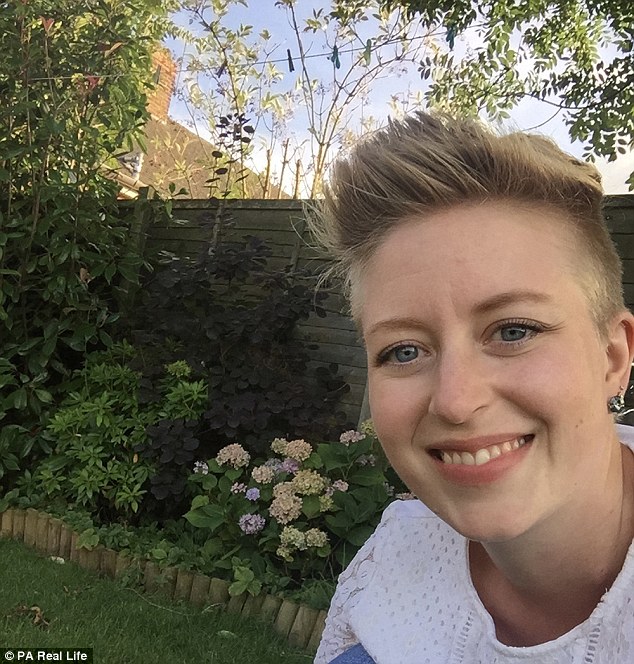 Remarkable new insights into the pathology of Usher syndrome

Kim Kardashian's Greatest Quotes About Motherhood Over the Years

China to Allow Home Quarantine for Some Infected With COVID

Sneating Is The Latest Dating Trend That Everyone Is Talking About