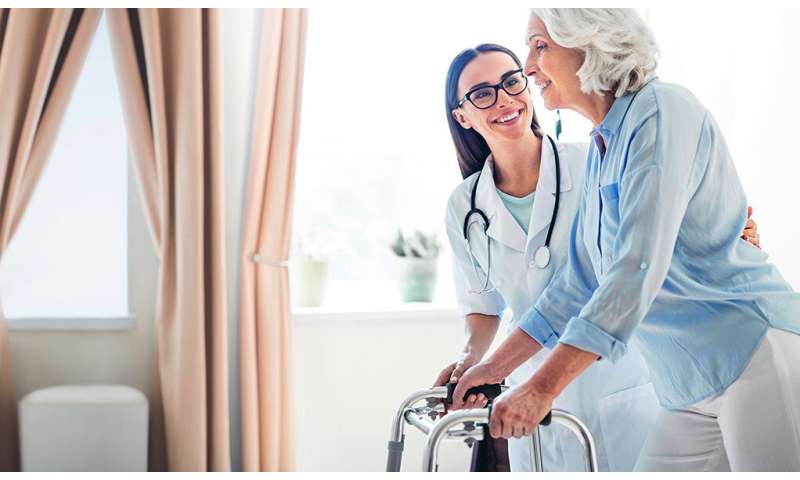 A study just published in JAMA Internal Medicine finds that hospitals can administer a simple walking test to evaluate the likelihood of functional decline in older adults following a heart attack. Researchers say the nationwide study could have important implications for how patient care following heart attacks is managed, improving independence in older adults.

The research was done as part of the SILVER-AMI Study, headquartered at Yale, which focuses exclusively on patients age 75 and over who experienced a heart attack in order to discover whether collecting information on aging-related conditions improves care and outcomes.

Heart attacks (acute myocardial infarctions, or AMIs) are one of the leading causes of death in the developed world, and more than one-third of heart attacks occur in adults aged 75 and over. The health impacts don’t end once patients leave the hospital—some 30 percent of patients experience losses in function and independence that can last for months.

The study, by Yale epidemiologist Alexandra Hajduk and others, involved 2,587 patients across 94 academic and community hospitals in the U.S. Patients were given a brief walking assessment called the “Timed Up and Go” or TUG. During the assessment, patients were asked to rise from a seated position, walk a short distance, turn, walk back, and sit back down. Researchers found a strong correlation between poor TUG performance and new limitations in patients’ ability to take care of themselves, with difficulty bathing being the most common, followed by difficulty dressing, getting in and out of a chair, and walking around the home.

“This test was able to predict with high accuracy whether patients will lose independence in some of the most important tasks needed to live independently,” Hajduk says, noting that these findings could lead to important improvements in the way patient care is managed following treatment for heart attacks.

“It’s increasingly recognized that getting people up and moving in the hospital is important,” she says. “But based on these findings, hospital staff may be able to proactively apply preventive treatment or tailor rehabilitation to a patient’s needs, whether that is a physical therapy consultation, home health care, or enhanced social support.”

Baby's patch of eczema turns out to be rare childhood cancer

Tragedy in the Skies: Another Reason Buying a Pup Online Is a Bad Idea