New mothers and an expert talk about whether feeding a child each time he or she cries is healthy.

How often have you resorted to your comfort food just because you are stressed or upset about something or ended up overeating on occasions? If you are among those constantly fighting the desire to overeat, you may, perhaps, need to look back at your childhood. The habit of relying on food as a mood-lifter might have originated from the way one was fed as a child. Recent studies have revealed that when a mother feeds a crying child just to soothe, even if the child is not hungry, it can lead to obesity.

According to a study recently conducted by some US researchers at Penn State College of Medicine, babies soothed with food early on are more likely to use it to soothe their distress later on in life. This tendency can thereby lead to obesity.

Again, according to Dr Ian Paul, a professor of pediatrics and public health sciences at Penn State College of Medicine, the normal ability to regulate a child’s emotions “becomes overridden with a food reward to soothe them and that then projects later into life — when they are upset or depressed, food becomes the mechanism to soothe these emotions,” as quoted by a leading daily.

Soothing a child by feeding

Express Parenting got in touch with pediatrician and nutritionist Dr Charu Kalra to find out if the studies really speak the truth.

“Feeding a baby each time he or she cries means we are overfeeding. When we overfeed a child, he or she tends to become obese in later years. When this child is three or four years old, he learns to start eating on his own, which is when he may start developing obesity. Parents offer the child either homemade food or very high calorie food, and he doesn’t know how to say no,” explained Dr Kalra.

Some parents also tend to force-feed their child. “A newborn can be fed with a spoon after the first six months, as long as they are doing it happily. After a year or so, parents tend to force-feed the child. As a result, the child may also develop an aversion to food. Even if a child is hungry, he or she wouldn’t want to eat since all they associate it with is the practise of feeding them forcefully by holding them tight and making them sit on the lap,” said Dr Kalra.

“Almost 80 to 90 per cent of mothers who visit me, have confessed to shoving food down the child’s mouth. Some of these parents also tend to force-feed with a syringe. That’s not uncommon in India,” informed Dr Kalra.

So, why do most parents resort to feeding for soothing a crying child? “Ignorance is one of the major factors behind this practice. When parents go to a doctor or a nutritionist, they are advised on the nutrients the child should be fed but they are not told how to feed the child,” Dr Kalra clarified. 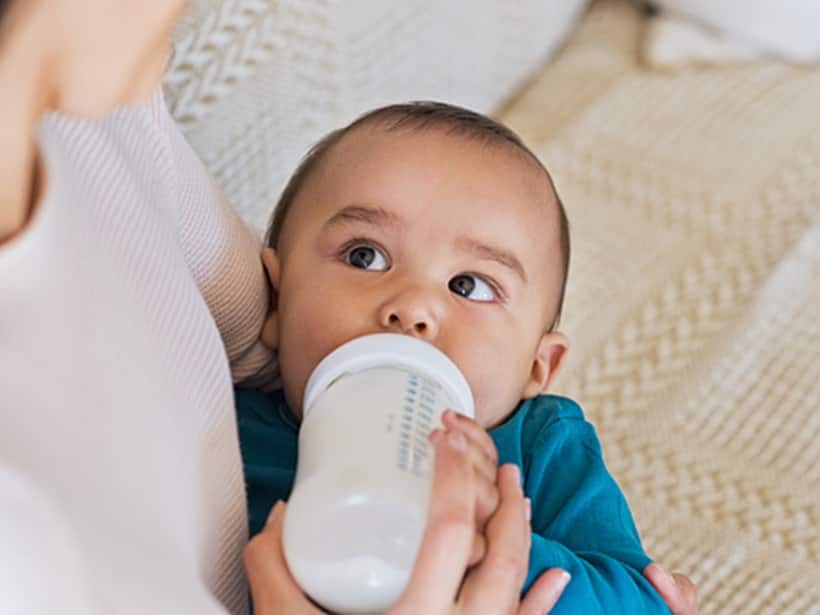 How to soothe a child who is crying

Next time your baby cries, try identifying the actual reason behind it rather than feeding him or her. Exposing the baby to fresh air by stepping outside the house often helps. One can also massage the baby, swing the baby in one’s arms or sing a lullaby.

“It has never come to my mind to feed my baby if she is crying. I think, most of the time, when my baby cries, it’s because she wants attention. She may be bored of sitting at a place for long and so, I just hold her and walk around. My baby gets irritable every time she wants something, mostly things available in the room. We just keep giving her things to play with. I have never fed my baby to soothe her,” said Sonya Caroline Shah, whose baby daughter turned one recently.

Another young mother, Gitika Dhanjal, said, “My daughter is one year and 10 months old. Every time she cries, I try to distract her by showing her things. My daughter eats only three times a day at regular intervals. I don’t feed her all the time. Personally, I know of parents who resort to feeding the baby when he or she cries. Overfeeding a baby can affect his or her health in the long run.”

Dr Kalra also suggested another method of feeding a baby called baby-led weaning. “This is a new concept in India but it has been prevalent in the UK and US for long. As per this method, the child should be allowed to eat on his own. When the child starts picking up things, when the baby is around nine months, they can be made to sit on a high chair or in any creative area of the house. The child should be offered a lot of colourful things while eating. He should also be given the freedom to eat whatever he wants to. That way, he will not only develop interest in eating, he will also learn to say no to food when necessary, thereby preventing obesity,” she said.

Pihu trailer: 6 ways to prepare your child for an emergency

DR ELLIE CANNON: Is my sore back a result of IBS?

What is the long-term vaccine effectiveness against SARS-CoV-2 infection?