The holidays are Mariah Carey season, and that’s just a fact of modern life. For the two months at the end of the year, the sound of Mariah singing “All I Want For Christmas Is You” plays on repeat — and this year, Mariah was also queen of the Macy’s Thanksgiving Day Parade in her hometown of New York City on Thursday.

And Mariah dressed the part of royalty, too. Clad in a bright tulle gown, she wore a tiara and held a parasol during her performance. The undeniable highlight was at the end, when it was time to sing “All I Want For Christmas Is You.” Her eleven-year-old twins, Moroccan, aka Roc, Monroe, aka Roe, joined her to dance as she performed her rendition of the holiday hit.

Mariah was thrilled to have the support of her two little ones. She wrote on Instagram after the show, “Happy Thanksgiving!!!🍁 Grateful and so proud of my beautiful kids Roc and Roe, grateful for the lambily and for the precious moments in life. ❤️❤️❤️ Now it’s reaaaallly time!!! 🎄🎅🏼”

There was more to come from Mariah on social, as she shared an image of herself heading home to rest after earning it with her big parade performance. Showing herself finally unwinding, she posted on Instagram, “après-parade, basking in gratitude.”

Later on, it was time for dinner! Mariah gave a peek into how she celebrated with Roc, Roe, and their extended family and friends via a sweet Instagram video. Mariah was clearly excited to have had her mains and desserts, but there was one thing she really needed. She posted a fun video with the note, “We had an amazing Thanksgiving dinner, only one thing was missing!” Mariah then proceeded to ask family and friends if they also missed having “anointed greens” as part of the meal. Everyone, naturally, said yes!

And what are anointed greens, you ask? Well we did the sleuthing! It’s a dish Mariah invented, in which she cooks greens with a bit of meat. The greens are a relatively new addition to the Carey holiday menu, it turns out. “It was two years ago at Thanksgiving, and I was making a pot of greens,” she recently told People. “They were so good we named them the Anointed Greens. Cooking for my friends and family, everything that I was doing at the time, I thought, ‘Wow, this is so different from when I was little.” 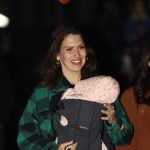 Hilaria Baldwin Opens Up About Using a Surrogate: ‘You Won't Offend Me With Your Questions, So Bring Them’

Mariah made the dish again last year for Thanksgiving —  but her parade duties must have kept her away from the kitchen this time around!

These celebrity parents are on double duty!

Good news for parents: Many preemie babies grow up fine

Signs and Symptoms of Moebius Syndrome

A New Start for Starfish

Harry Potter books were removed by a school for ‘curses and spells’. Here’s what parents think about it

Blood clots: Five travel tips to prevent thrombosis – are you at risk?

No Flu Season Will Affect Next Year’s Vaccine Prep