In distress from severe heat exhaustion, the three-year-old dog required immediate lifesaving measures to reduce her core body temperature. She also suffered from multiple health conditions including intestinal parasites, hair loss, poor skin, mange, flea infestation, excessive debris in both ears and inflammation in the tear glands of both eyes.

Because the hurricane had significantly damaged CPAS, the dog was taken to the ASPCA’s temporary shelter nearby. Showing remarkable resilience and a sweet disposition despite her ailments, she soon became a favorite among ASPCA staff and volunteers.

“She was a medical mess,” says Jessica Rushin, Director of Placement Partnerships for the ASPCA National Field Response team. “But she brightened our days. We came across hundreds of animals after this disaster, but none were quite as memorable as this little lady.”

“She was like this squishy gargoyle,” says Lacie Davis, former Manager and Animal Rescue Technician for the ASPCA. “A total diva. She’d waddle out for a walk and quickly waddle back to the air conditioning.”

On October 8, Blue was transported to the SPCA of Texas in Dallas, where their Foster Coordinator at the time, Tommie A., who assigned animals to temporary foster caregivers, decided to take on fostering the cuddly canine herself.

“[Blue] was a last-minute add-on to the roster,” says Tommie. “But when I saw her, I knew I wanted to foster her.”

At the SPCA of Texas, Blue was examined, and it was determined that her medical issues would take at least six weeks to treat. Like their ASPCA counterparts, SPCA of Texas staff fell in love with Blue’s sweet, gentle personality and her strong desire to receive and give affection.

Blue before and after her eye surgery.

“She leaned into our staff for all the love she could get,” says Madeline Yeaman Arnold, SPCA of Texas’ Senior Marketing/Communications Specialist. “She even curled up at our feet.”

“Within a week, Blue’s skin showed signs of improvement and her hair began to grow back,” says Madeline.

Blue often accompanied Tommie to the SPCA, delighting staff with her personality and progress. At home, she got plenty of attention from Tommie’s husband, Brian, and their two young children, Sloan and Evelyn, as well as the family’s four dogs and tuxedo cat, Max.

Blue with Max, her foster family’s tuxedo cat, left, and lounging on her favorite chair.

“She was great with everyone,” says Tommie, who fostered Blue for nearly seven weeks. “She’s just the sweetest, easiest dog we’ve had and loves to give hugs.” 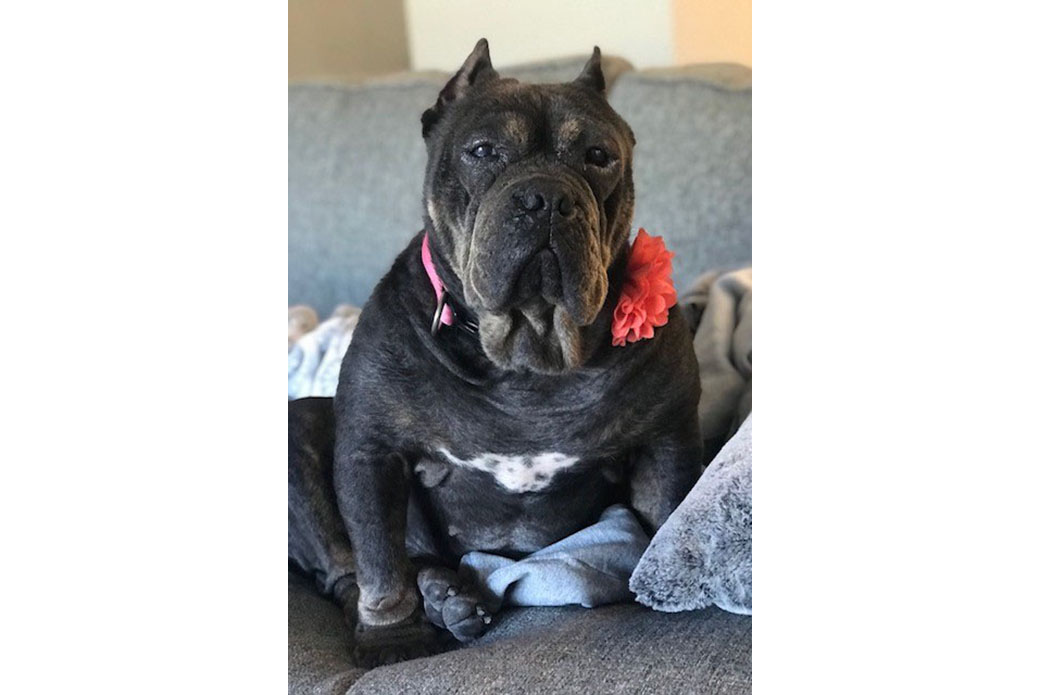 Blue’s circle of friends widened even further at the Veterinary Eye Institute in Plano, Texas, where specialists performed surgery to correct a condition known as entropion—where the eyelids roll inward and scratch the eyes—commonly found in bulldog and other short-nosed breeds.

“Blue lit up the room the minute she came in—everyone just loved her,” says Cara K., a veterinary technician at the Eye Institute. “When I learned she was available for adoption, I couldn’t believe it.”

Cara’s family lost their yellow Labrador, Sassy, to cancer last May and had wanted a new dog ever since. In December, Cara, who has experience caring for dogs with medical and behavior challenges, took over as Blue’s foster caregiver.

A New Beginning for Blue

Blue with her new best friends, Tora the tabby, left, and five-year-old Max.

“Without Sassy, Max was very lonely,” says Cara. “He learned so much about how to be gentle and how to play with her, and I knew he would benefit from a dog like Blue who could match his energy and teach him boundaries.”

The family adopted Blue on January 13, and her companionship quickly became a valuable source of support when Will was laid off from his job during COVID-19.

Blue’s second foster family—from left: Will; five-year-old Max; and Cara—adopted her in January.

“Will’s layoff was a blow,” says Cara, “But we’re much happier with a dog in the home. After Will and Blue play fetch, his mood is 100 percent better.”

Princess Blueberry Hippo’s presence is still felt by many outside her new family.

“I will never forget [Blue’s] adorable self and her sweet personality,” says ASPCA Senior Director of Veterinary Services, Dr. Laurie Millward, who managed care for the other animals at the ASPCA’s temporary shelter. “She made my first field experience unforgettable.” 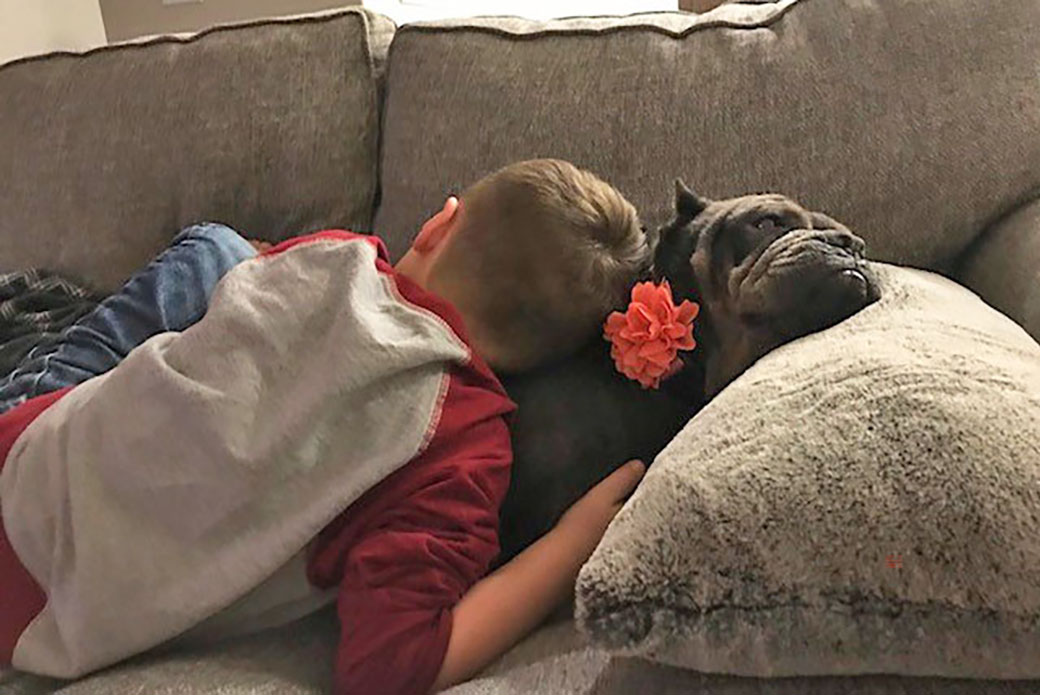 For information about any remaining dogs from this case that were transferred to the SPCA of Texas please visit www.spca.org/findapet.

15 Red Flags You're In A Co-Dependent Relationship

17 Sex Terms You Were Too Embarrassed to Ask About, Defined