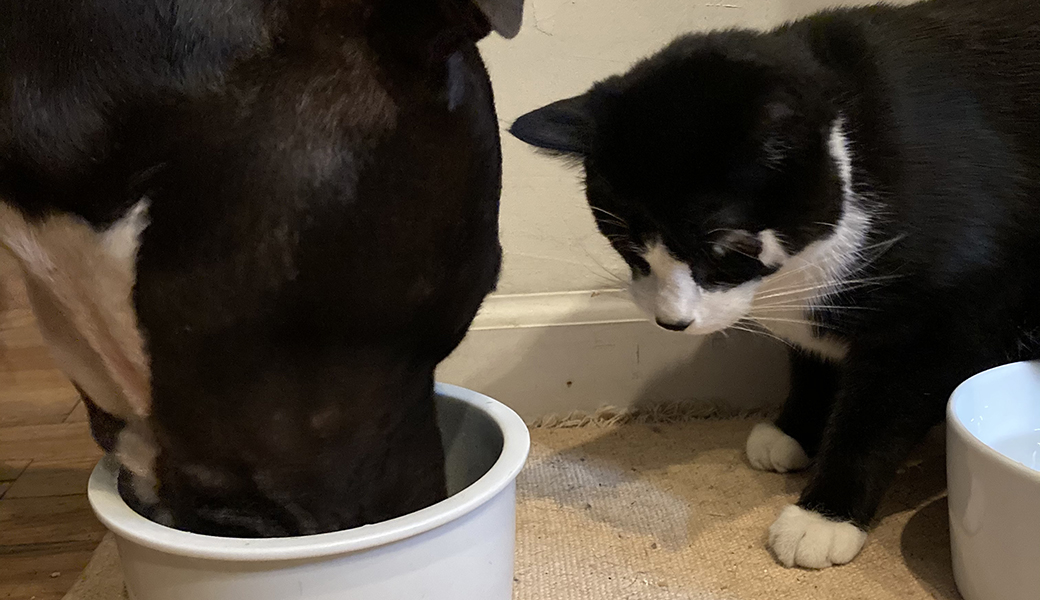 For longtime animal lover Yasmine A., having pets around the house is a must. Which is why she decided to become a foster caregiver for the ASPCA in 2019. Every animal that came through Yasmine’s door was special to her, but there was something extra special about Kibbeh and Rupert. 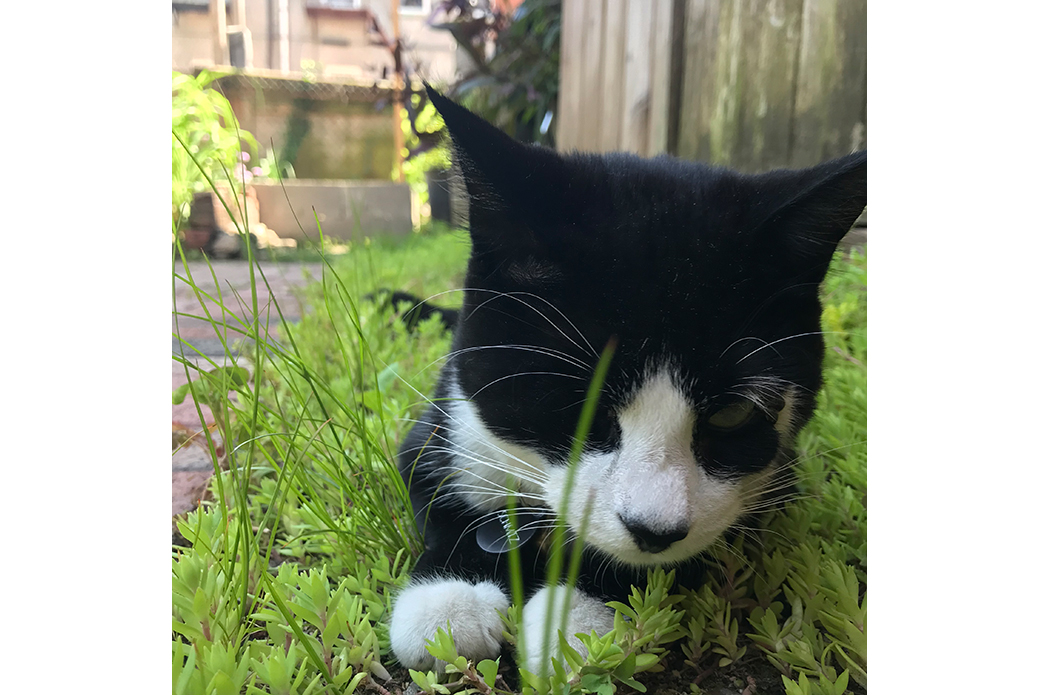 Kibbeh, a one-year-old black and white cat, was Yasmine’s fourth foster animal through the ASPCA.

Kibbeh came to the ASPCA as a stray in 2019. After a few medical exams, it was determined that Kibbeh was born with multiple congenital changes in his right eye causing him both discomfort and blindness. In order to take away the pain he was in, the decision was made to remove his right eye. On top of this, the veterinarian noticed that he had an eye condition in his left eye in which part of his eyelid did not completely form as well as abnormally directed hairs by his eyelid which caused irritation. To correct both of these, Kibbeh underwent surgery.

While Kibbeh was recovering from his surgeries, he was placed with a foster caregiver, Yasmine, until he could be placed with an adopter. 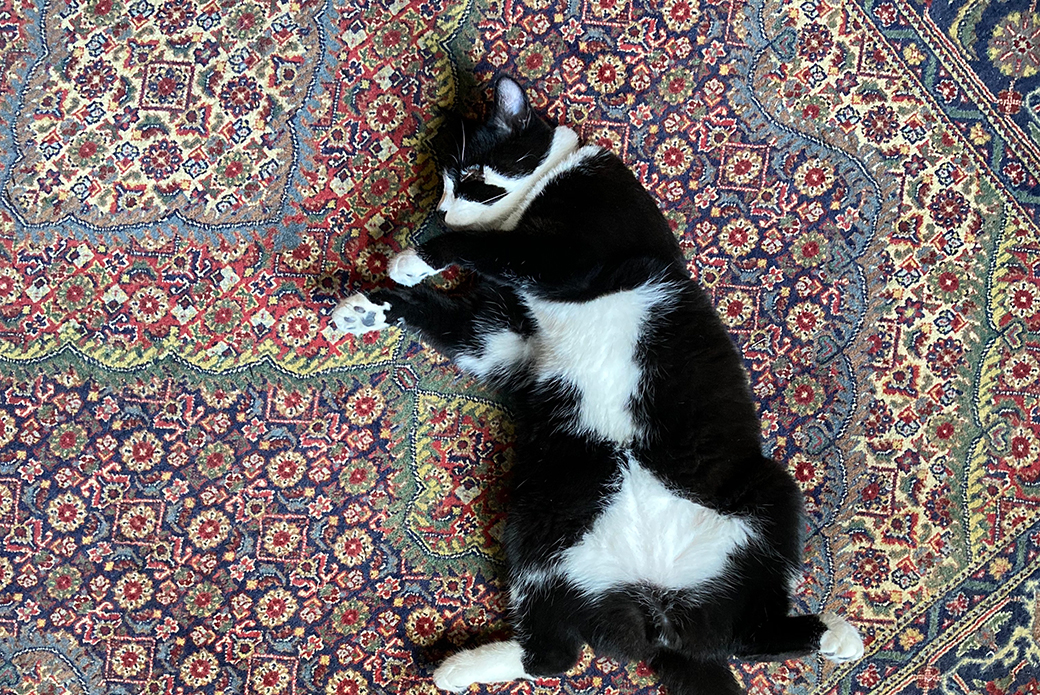 During his foster period, Kibbeh and Yasmine had gotten along so well, Yasmine knew she had to adopt him. Yasmine and her partner David’s previous cat, a 19-year-old named Hamilton, passed away a few years ago, and they finally felt ready to adopt a new furry friend.

Sometimes there are animals you click with from the moment you meet them. For Yasmine, Kibbeh was one of those animals.

“[Kibbeh] took to us immediately when we were fostering him during multiple eye surgeries and throughout his healing process,” says Yasmine. “He has taught us about resiliency and trust.”

In February of 2020, Yasmine made it official and adopted Kibbeh. 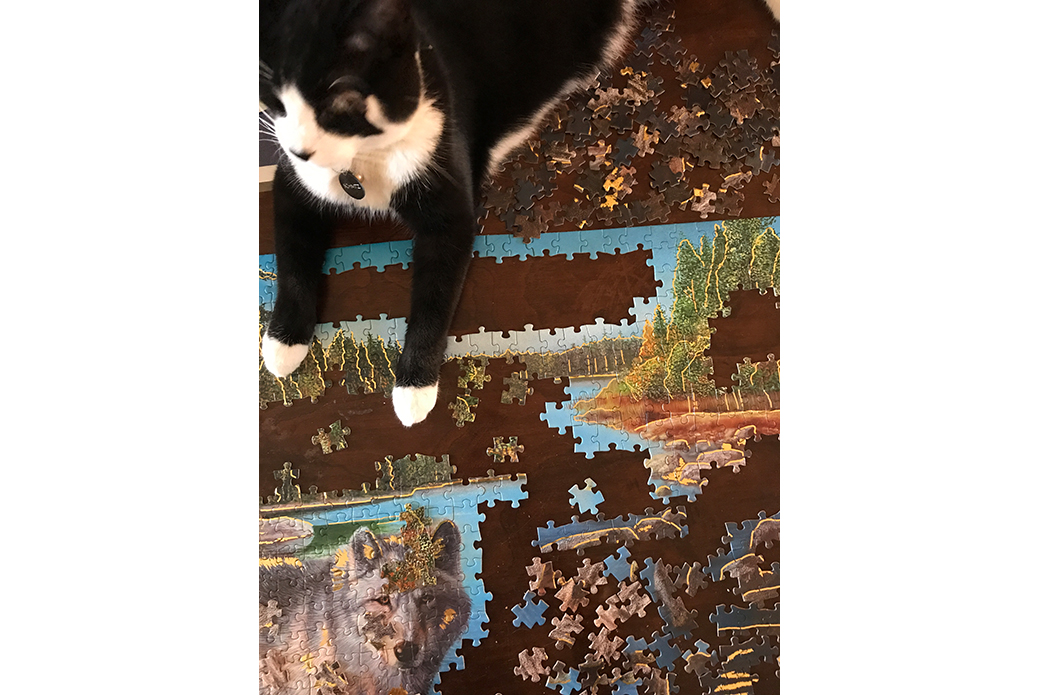 “He is very trusting of humans,” says Yasmine, who attributes his friendly nature to the care he got at the ASPCA while battling his medical issues. “While he only has one eye now, he is full of energy, loves the outdoors (always on a leash) and watching birds eat at the bird feeder through the window.”

After Kibbeh settled into his new home, Yasmine continued to foster and soon met a foster dog that touched her heart like Kibbeh did. 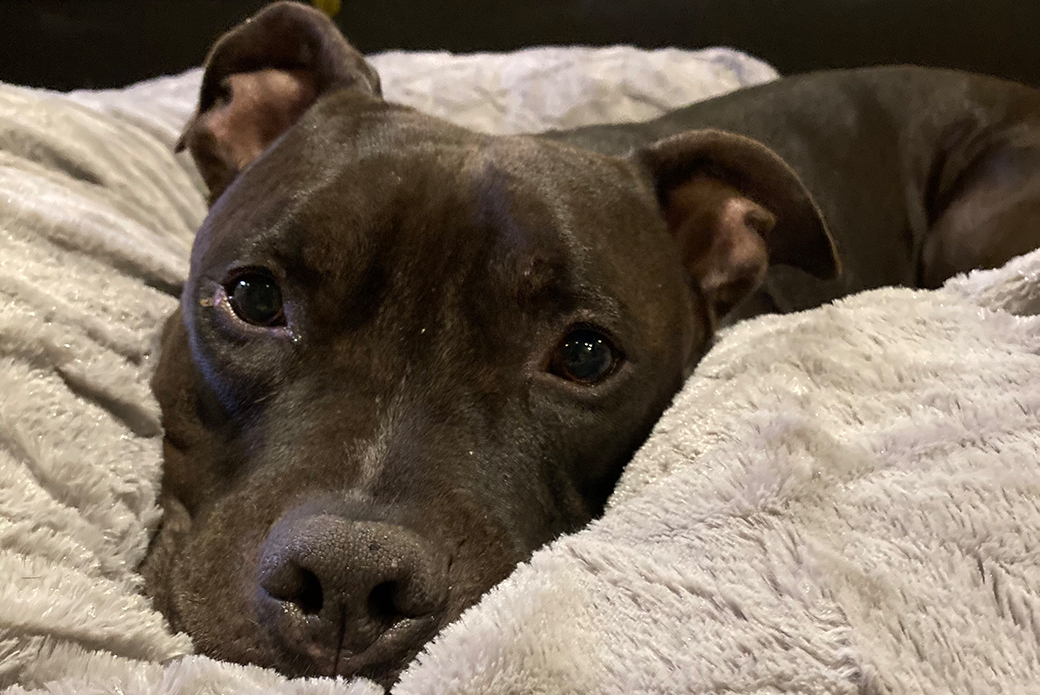 Rupert, like many of the animals we care for at the ASPCA, didn’t have the easiest life before he came to us. After being surrendered to the ASPCA Adoption Center, Rupert was briefly adopted but then returned.. Unfortunately, due to some behavioral issues, including separation anxiety, Rupert became a bit harder to place than some of the other animals at the Adoption Center. In fact, he became one of our long stay animals as he spent four months looking for an adopter.

While waiting to find the right fit, Rupert was able to live with a foster caregiver who could help him feel comfortable living in a home and work on being the best version of himself.

This wonderful foster who would change Rupert’s life, as you may have guessed, was Yasmine.

“We decided to foster a dog during COVID since we were working from home,” Yasmine explains. “We weren’t sure if we had the capacity or energy to adopt a dog and thought fostering would help us know if we were ready to adopt.” 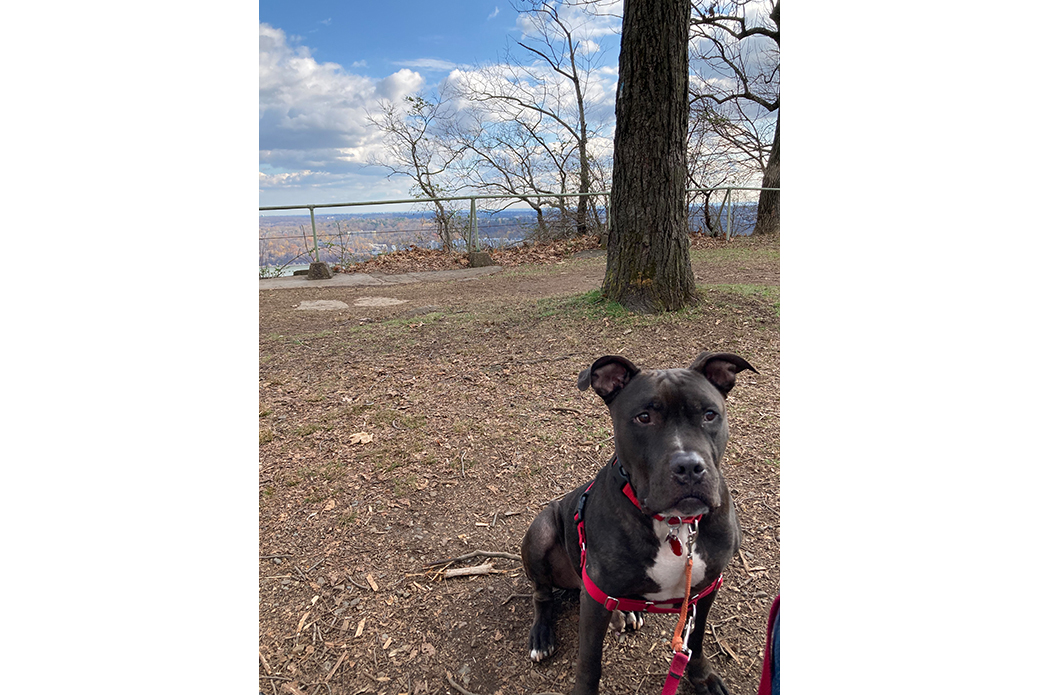 During their time together, which ended up being close to four months, Yasmine and Rupert grew close. Rupert also made amazing progress with his separation anxiety, something he’d been previously struggling with.

“When we saw how much progress he was making in such a short amount of time, it was hard to give him up.”

However, Yasmine still felt unsure about if she was ready to take on Rupert’s separation anxiety issues completely. But she tells us that with the support of the ASPCA team, Rupert came a long way, and that once he was more settled in their home, they could see what a great dog he is.

Knowing that Rupert and Kibbeh got along, their fate was sealed. What Yasmine once believed to be a temporary situation, became a home for Rupert. Yasmine officially adopted him in November of 2020.

Two is Better Than One

Since becoming a family, Rupert and Kibbeh have adjusted to their new lives together. According to Yasmine, the two have gotten more and more comfortable with each other with each passing day. Rupert has started to allow Kibbeh to sit by his food bowl and Kibbeh has begun to allow Rupert to sniff him more often. They have their own, self-assigned sleeping spots as they do not yet cuddle, but it’s looking as though they may get comfortable enough with each other to do so eventually. In fact, Rupert loves to “borrow” Kibbeh’s toys!

“Kibbeh loves the backyard and meeting the neighbors. Rupert loves (most) of the dogs that he meets on his daily walks in the neighborhood and is a bit of a celebrity since he carries his stuffed car—given to him by the ASPCA—with him on all of his walks.” 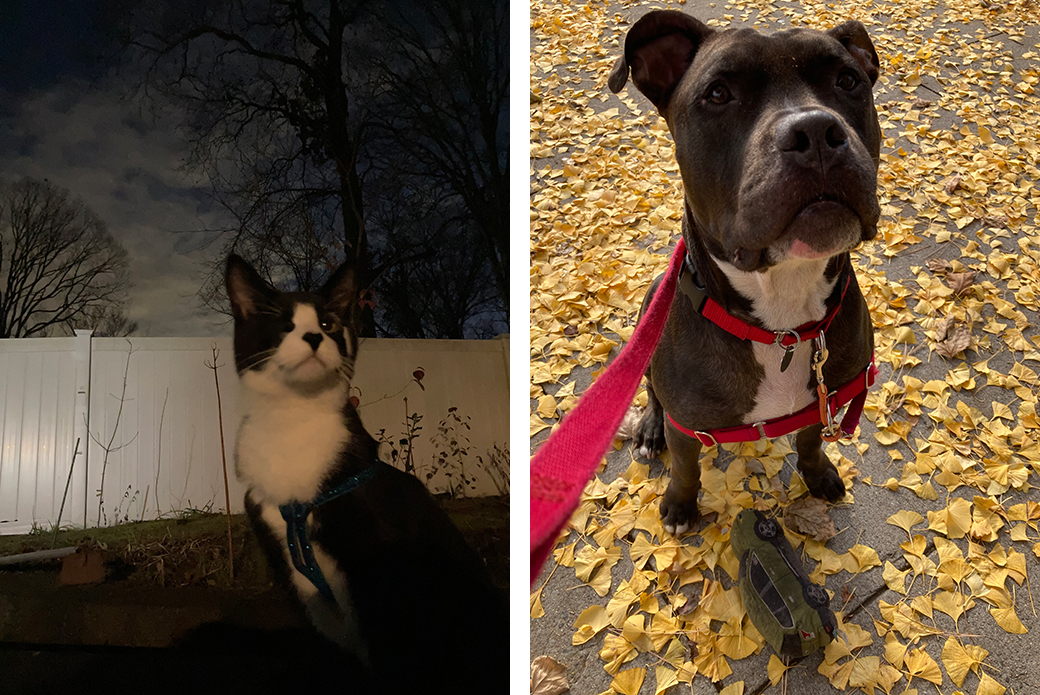 Since finding not one but two foster fortunes and adopting Kibbeh and Rupert, Yasmine has also learned to appreciate her neighborhood more as she now gets to interact with people she normally wouldn’t.

“It’s not only people who walk their dogs, but people who want to meet Rupert and learn about his stuffed car!”

Harder to place animals like Kibbeh and Rupert are just looking for someone to give them the love they deserve. It is thanks to loving fosters and adopters, like Yasmine, that make second chances for animals like these possible.

A Second Chance for Soba

Can you trust the shakes and snacks that claim they can replace meals?

Chaos by Corona: fortunately, the pathogen is not a killer virus

Virginity is make-believe, but the damage it causes women is very real

Not only Wilke: the Ministry published the list with other relevant brands