The sweetest memory! Bake Off winner Candice Brown reveals how an old family cake recipe brought her beloved grandfather back from dementia for precious moments together

Candice Brown, 33 was the winner of the seventh series of The Great British Bake Off

Not many people appreciate the superpower of a scrumptious cake quite like Candice Brown. As the 2016 champion of The Great British Bake Off, she stole the heart of the nation with her quirky reimaginings of traditional British classics and her perfect pout, never without a slick of vixen-red lipstick.

Candice, 33, secured her spot as Bake Off favourite halfway through the competition when she added a surprise tier to her already sizeable botanical-themed cake: a layer of boiled fruit cake, borrowed from her late grandmother Margaret’s – or Marg, as she was known – handwritten recipe book.

The daughter of a pub landlord, young Candice was sent to her ‘incredible’ grandparents at weekends and school holidays, where – joined by her brother, Ben – she’d watch as ‘Nan’, Marg crafted delicious baked treats for them to devour, boiled fruit cake included. ‘I adored them,’ the baker says of her grandparents. ‘My nan was an incredible cook.’

The heirloom fruitcake recipe proved hard to resist for the judges too, seeing the North Londoner sail through to the GBBO semi-finals. But it wasn’t the first time the cake had achieved something remarkable: ten years earlier it brought her beloved grandfather Fred back to his family, as he fought the fog of Alzheimer’s disease, the most common form of dementia.

Candice recalls: ‘I made it and took it to the care home where he was staying. He took a bite and suddenly, his eyes weren’t grey any more. They were a gorgeous blue colour again. He’d come back to me.’

Despite his diminished memory, Fred’s recollection of his late wife’s cakes, baked countless times over their 60 years of marriage, remained firmly intact.

Candice says: ‘He’d pause and say, “It’s not as good as my Marg’s!” That’s when I knew he wasn’t gone completely. He was still there.’

The glimmer of recognition encouraged Candice to offer Fred more of his fondest foods.

‘We’d take choc-ices, corned beef sandwiches and scotch – all his favourite things that he loved,’ she remembers, ‘and he’d say, “Ooh, that’s nice.” Then he’d disappear off again.’ 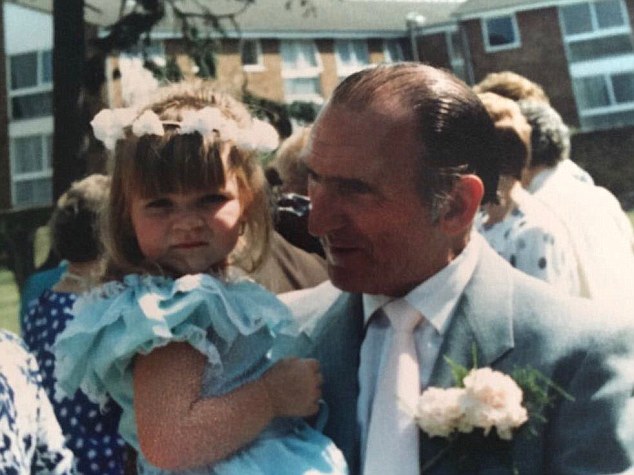 Candice as a toddler in her grandfather Fred’s arms, years before he was diagnosed with dementia

Though fleeting, these moments of clarity brought comfort to Candice and her family as at this point, in April 2003 and at the age of 81, Fred’s condition had rapidly worsened: three years after his diagnosis he didn’t recognise his family at times, communication was minimal and he struggled to walk.

Typically, Alzheimer’s – caused by the build-up of ‘tangled’ proteins in the brain – first impacts short-term memory before also compromising long-term memory, motor skills, language and often personality as it progresses.

This was the way it went for Fred. ‘The last thing that went were his earliest memories,’ says Candice. ‘Conversations were few and far between but he’d talk as if he was back working in a bakery when he was 13, and he’d refer to the time when he was in the Navy during the war.

Fred’s symptoms began as far back as 1996, when Candice was 12. But they were diagnosed as neurological illness Parkinson’s – which causes tremors – and the Alzheimer’s was disguised. ‘He was always shaky on his feet because of the Parkinson’s, but he started to get more muddled and confused. He’d forget things, repeat himself over and over, and follow Nan around the house all day.’

Finally, in 2003, came a long-awaited referral to a memory clinic, where MRI scans and cognition ability tests confirmed Alzheimer’s disease. 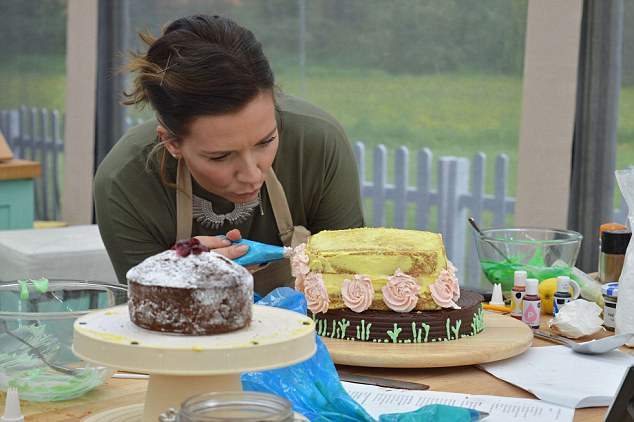 ‘He deteriorated very fast from that point,’ says Candice. ‘He’d see rats in the fireplace. He was on his hands and knees staring and searching even though we’d tell him there was nothing there. Eventually we learned to just go along with it.’

Then 18, Candice would make weekend trips home from university in Birmingham to join the rest of the family in caring for her grandfather. ‘It meant I could give Nan a break from looking after Grandad. I would have done anything for him.’

Then, one afternoon in June 2005 Grandma Marg went out to the supermarket for the couple’s weekly shop. She never returned.

‘Her body gave up,’ Candice says croakily. ‘She just died. She was tired, she’d had enough. The bottom of my world fell out that day.’

The Browns had to explain it all to a bewildered Fred.

‘We thought, does he understand what we’ve said? Then a little while later he suddenly said, “Marg’s gone, hasn’t she?” ’

Candice’s aunt tried to keep caring for Fred at home. But two weeks after Marg’s death, it became too taxing and he was placed in a local residential home. Within two years, Fred’s Alzheimer’s took a greater hold, with conversations becoming few and far between. After three admissions to hospital for a urinary infection, Fred contracted MRSA. He passed away in hospital on April 20, 2007, aged 87.

Was there a sense of relief? ‘Never,’ Candice says. ‘He was never, ever a burden. But we just thought, OK, he’s with Nan now.’

Ten years later, the sense of loss remains acute for Candice – especially at Christmases and birthdays, and when she bakes Nan’s boiled fruit cake.

Studies show that the risk of dementia may be reduced thanks to healthy lifestyle choices in general, including a diet low in sugary foods, and regular exercise.

So I wonder if Candice is about to ditch the buttercream-clad cakes and biscuits she’s now famous for? Is she heck: ‘Life is short and I don’t want any regrets. I don’t smoke, I stay active, and I know these things keep the brain healthy. But I’ll enjoy my glass of wine. I’ll enjoy a dance with my friends. And I’ll definitely enjoy a slice of cake – just like Grandad did.’

From penny press to Snapchat: Parents fret through the ages

Why you need eucalyptus in your shower

Study reveals an inherited origin of prostate cancer in families