Are you able to taste a bitter chemical found in foods like dark chocolate, coffee and broccoli? It means you are almost 60 per cent more likely to get CANCER, reveals study

Being sensitive to bitter tastes could make you almost 60 per cent more likely to get cancer, according to research.

Millions of people are unable to taste a bitter chemical found in foods like dark chocolate, coffee and broccoli, but they might not be missing out.

However, supertasters – those who are particularly sensitive to a bitter chemical known as PTC – could be 58 per cent more likely to get cancer.

Researchers thought this would be because they would be put off bitter-tasting green vegetables, which are thought to have cancer-fighting properties.

But they were wrong, and people who are supertasters do not eat fewer vegetables than those who cannot taste PTC.

The study of 5,500 British women over 60 followed them for 20 years and found those who cannot taste the chemical at all are less likely to get cancer.

The scientists say they now want to do more research to work out the exact link so they can identify how the taste is linked to the disease. 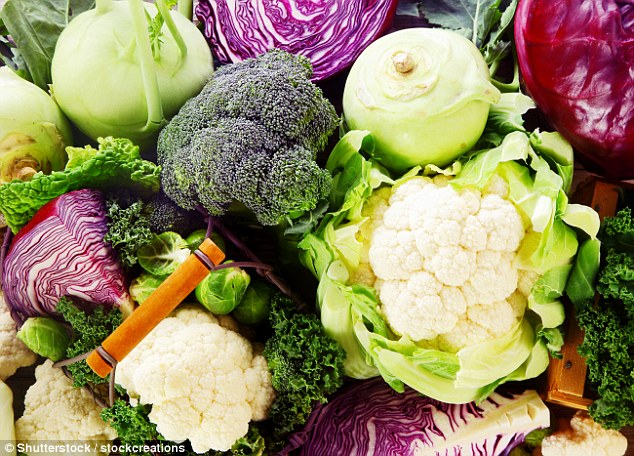 The chemical PTC has a bitter taste and is found in cruciferous vegetables, but around a third of people cannot taste it

Being unable to taste PTC – short for phenylthiocabamide – is a genetic trait which is thought to affect around a third of Europeans.

Most people will experience PTC, if they can taste it, in drinks containing caffeine, alcohol or in cruciferous vegetables like cabbage, cauliflower and broccoli.

Women who cannot taste PTC are least at risk of cancer, according to the study by Pennsylvania State University.

Whereas those who are considered ‘tasters’ – who can taste it but not strongly – are 40 per cent more likely to get cancer.

Supertasters, women who are very sensitive to the taste, may be 58 per cent more likely to get cancer than those in the other two groups.

‘The difference in cancer risks is striking’

Eating cruciferous vegetables such as sprouts, broccoli and cauliflower at least once a week can cut the risk of developing a variety of cancers, according to research published in 2012.

Those who eat them at least weekly cut the risk of mouth cancer and breast cancer by almost a fifth and oesophageal cancer by more than a quarter.

The research linked poor diet with the fatal disease with around a third of all cases of oral cancer is thought to be linked to an unhealthy diet.

Previous studies have found that a particular nutrient in cruciferous vegetables, which also include cabbage, watercress and radish, can kill cancer cells.

The results, published in the Annals of Oncology, found that the risk of kidney cancer was cut by almost a third and colorectal cancer by almost a fifth.

‘The difference in cancer incidence between the women with the highest bitter-taste sensitivity and those with the lowest was striking,’ said Joshua Lambert, lead author of the study.

Researchers were surprised to find out the reason for the link was not that super-tasters had been put off eating healthy vegetables by their taste.

They found those women did not eat noticeably fewer vegetables than women who cannot taste the PTC, but think the link may still be to do with overall diet quality.

Scientists assumed result would be because people are put off veg

Dr Lambert added: ‘Our hypothesis was that women who had higher bitter-taste sensitivity would be at higher risk of developing cancer than women who were non-tasters.

‘We thought that would happen because over their lifetime they would have consumed fewer bitter-tasting vegetables, which have been reported to have cancer preventive activities.

‘When we looked at the data, we saw that for women over 60, our hypothesis was partially correct.

‘Cancer risk was higher among women classified as tasters or super-tasters, but we didn’t see any differences in bitter-tasting vegetable consumption.’

The researchers studied data from the UK Women’s Cohort Study of 35,000 people which was set up in 1995 to explore links between diet and chronic diseases, particularly cancer.

They analysed women’s food intake based on questionnaires filled out by the participants, and compared this with NHS cancer data.

This revealed women who said they were more sensitive to bitter tastes in the questionnaire were more likely to get cancer during the 20 year study.

The researchers’ findings were published in the European Journal of Nutrition.

Is there a link between mouth bacteria and rheumatoid arthritis?

Bereaved individuals may face higher risk of dying from melanoma