Can reheating rice give you food poisoning? Nutritionist explains you should put it in the fridge within an HOUR to avoid diarrhoea

It’s a popular takeaway food, doled out at Chinese and Indian restaurants as a tasty accompaniment to main dishes.

But many struggle to eat all of the rice they get – and decide to put it to the back of their fridge and heat it up later in the week.

Now, a British expert has revealed that you should keep cooked rice in the fridge for no longer than 24 hours before consuming it.

Fiona Hunter, a registered nutritionist for Healthspan, also said it should be never heated more than once and should be refrigerated within an hour. 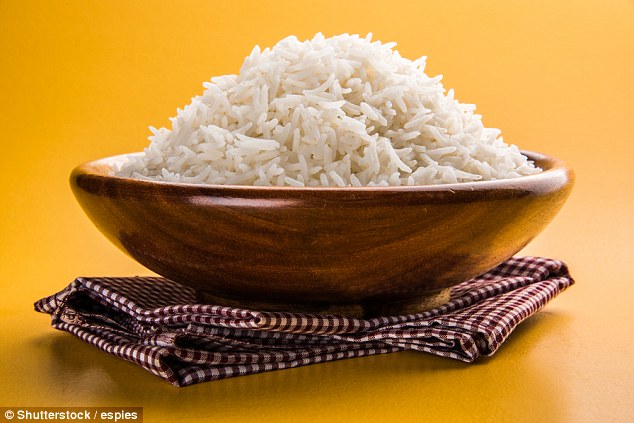 It’s a popular takeaway food, doled out by Chinese and Indian restaurants as a tasty accompaniment to main dishes

She said: ‘You can reheat rice but you need to be careful to make sure it is stored properly before you reheat it.

‘Uncooked rice can contain spores of a bacteria called Bacillus cereus which can survive when rice is cooked and cause food poisoning.

‘If rice is left standing at room temperature after it’s been cooked, the spores can grow into bacteria, which will multiply.’

Ms Hunter explained this process produces toxins that can cause bouts of vomiting or diarrhoea.

She added: ‘The longer cooked rice is left at room temperature, the more likely it is that the bacteria multiply.

‘So it’s vital that you get cooked rice into the fridge as soon as possible, within an hour, if you’re planning to reheat it later.

‘If you have a large quantity of rice left over it helps to divide it up into smaller portions so that it will cool quicker.’

It comes after a food contamination expert warned last February that potentially thousands of adults may be cooking rice wrong.

He found cooking the grains in excess water helps to flush out arsenic, preventing any possible chemical poisoning.

While soaking rice overnight slashes levels of the industrial toxin – linked to heart disease and cancer – by around 80 per cent.

Where are you most likely to get food poisoning on holiday?

According to the World Health Organisation, African and South-East Asian regions have the highest burden of foodborne disease.

Though, because of their popularity with holidaymakers, countries such as Spain, Mexico and India are also often associated with dodgy stomachs.

The WHO says that one in 10 people (600 million globally) are ill every year from eating contaminated food – and 420,000 die as a result.

Children under five years of age are at particularly high risk, with 125,000 children dying from foodborne diseases every year.

Diarrhoeal diseases are responsible for more than half of the global burden of foodborne diseases, causing 230,000 deaths every year.

The risk of foodborne diseases is most severe in poor countries, with bad levels of hygiene, unsafe water and insufficient food safety legislation.

An $80,000 tab for newborns lays out a loophole in the new law to curb surprise bills

Italy Warns Against Misuse of Herpes Drug as COVID-19 Treatment

Searching for a cure for deadly brain tumors