The decision last week by the health regulator ATAGI to approve a fourth COVID-19 shot for anybody aged 30 or over is significant for two reasons.

First, – if obviously – it is vital if we are to “live with COVID” successfully that Australians keep their vaccinations up to date, particularly as the efficacy of the first and second shots – now several months old for many of us – starts to decline. 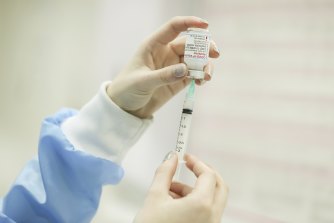 Fourth doses will be available for millions of extra Australians after ATAGI changed its recommendations.Credit:Alex Ellinghausen

Second, it is a welcome sign that with case numbers stubbornly high the authorities are finally acting with some urgency to forestall a crippling outbreak fuelled by the Omicron BA.4 and BA.5 sub-variants and seasonal conditions that could match the worst of what we saw in January.

For it has certainly felt that COVID just dropped off the radar in recent months. It’s almost bewildering, in fact, how quickly we went from a nation baying for blood when Novak Djokovic arrived in Melbourne in January with an incomplete vaccination status to barely caring about COVID at all by the time of the May federal election, when only 1 per cent of those polled in the ABC’s Vote Compass survey rated the pandemic an important issue.

Vaccines have – rightly – made us feel safer and public messaging has increasingly told us that COVID is now a matter of personal, not government, responsibility, even if it has, ironically, made us worry less when perhaps we should have worried more.

And it’s understandable that after 2½ years we just want the whole thing to go away, perhaps suffering from what the World Health Organisation calls “pandemic fatigue”, less and less motivated to follow health advice or even to stay informed about the effects of COVID.

The trouble is, as we all know when we can bear to engage with it, COVID won’t just go away. It is wily, persistent, adaptable and determined. And the numbers suggest it is more successful than ever, with 256,000 active cases across Australia on Friday, 3977 in hospital and the death toll relentlessly ticking on past the 10,000 milestone reached last week.

Living with COVID, a realpolitik phrase once tossed around so lightly, has come to mean accepting into our lives a virus that is on track in 2022 to kill more people than anything other than heart disease. Unlike heart disease it is contagious, which means its reach extends well beyond those who become seriously ill to affect the livelihoods of many more. Is there a school, workplace or sporting club in the land that is not currently impacted by COVID?

Yes, many of those who contract it have mild symptoms, but an unfortunate few go down hard. Nor does catching it confer immunity, as we used to hope – reinfection is not uncommon among the 8 million Australians now estimated to have had the virus. “Long” COVID can be debilitating. Business leaders are increasingly concerned about the long-term effects on the economy caused by staff shortages and disruptions.

There is now also a strong sense that reintroducing any health mandates, such as compulsory mask-wearing indoors, would not be tolerated. ACT Chief Minister Andrew Barr has pragmatically warned of the likelihood of “widespread civil disobedience” if any such measures were introduced.

This has had the unfortunate flow-on effect, as health editor Aisha Dow wrote last week, that “unwillingness to talk about any new or reinstated public health mandates seems to have extended to generalised COVID-19 avoidance.“

With limited tools at their disposal, governments both federal and state, must now find ways to convince a fatigued populace not only that COVID remains a threat, but that we must actively take measures to prevent its spread, without necessarily being forced to.

As Chip Le Grand suggests, effective public health messaging needs to be careful, nuanced and tailored to a target audience rather than necessarily broad-based. Former ALP strategist Kos Samaras told him: “They don’t want to engage with it, they don’t want to talk about it, they get angry at politicians who bring it up.”

With an election imminent in Victoria, it is unlikely Premier Daniel Andrews has much appetite to stir up memories of the pandemic’s darkest days. But neither can he just wish COVID away.

The federal government at least has some clear air, and it is encouraging that it has already launched a six-week, $11 million advertising campaign to promote uptake of both COVID and flu vaccines. Yet more must be done to encourage people to wear masks in crowded, indoor spaces, test when they have symptoms, isolate when sick and properly quarantine when exposed.

It won’t be easy, but the challenge is to maintain the good habits we learnt in the first two years of the pandemic by appealing to our common sense rather than through high-handed demands. For the way forward is no longer about command and control, but winning hearts and minds.

Gay Alcorn sends an exclusive newsletter to subscribers each week. Sign up to receive her Note from the Editor.

Most Viewed in Lifestyle

Dementia: The sign in the tongue that may hint at brain volume in patients with dementia

Spectroscopy in Britain Through the Ages