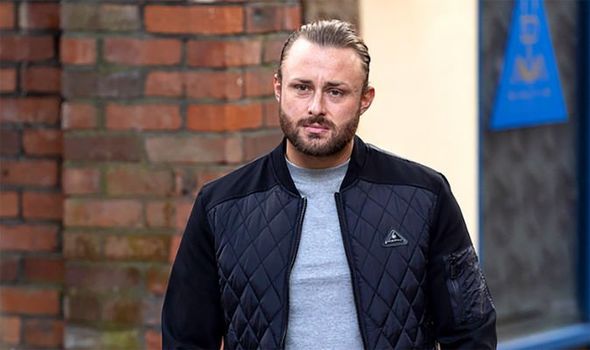 Cameron Hutchinson was so breathless two years go he could not even get off the sofa to take his dog out because of the effects of the genetic condition.

CF destroys the lungs with sticky mucus and fighting it off took six hours out of his day.

But in 2020 a Daily Express campaign helped get Kaftrio available on the NHS. And ever since, he’s seen his health improve and now has a baby boy.

He made his debut on Tuesday as trouble-making bad lad Stephen in soap Hollyoaks on Channel 4.

Cameron, 29, said: “Before starting Kaftrio, I spent six hours a day, every day, doing physio and nebulisers just to keep my lungs clear.

“It was exhausting and left me unable to work, socialise and live a life. I wanted children but feared for my future with them if we were able to have them.

“But within three days of taking my first Kaftrio pill my whole body felt different. I felt like a weight was lifted off my shoulders. I could take deep breaths.

“Now I only need to do 20 minutes a day and my lungs are clear.”

The treatment transformed his married life with Heather, 30, whom he wed in October 2019. Both were aware that around 98 percent of men with CF are unable to father children naturally.

But fortunately IVF treatment allowed the couple to welcome their baby boy Harvey, who was born last July.

Cameron said: “He is a bundle of joy and so cheeky. Kaftrio means I can see him grow up now.”

Former golfer Cameron, from Leeds, won the Ian Poulter Invitational in 2006 and in 2007, then competed on the EuroPro Tour aged 21.

But he quit the sport aged 23 and started modelling, before embarking upon an acting career.

What is happening where you live? Find out by adding your postcode or visit InYourArea

However, he had to halt his new role after he was diagnosed with the hard-to-shift lung infection mycobacterium abscessus.

Last autumn, the positive impact of Kaftrio led him to audition for the “brilliant” soap part – and he was thrilled to be cast.

His character Stephen is an enemy of Luke Morgan (played by Gary Lucy) who was part of a gang that once attacked him.

Cameron added: “Stephen appeared in the show before played by a different actor. Now he returns to spice things up.”

Half of Unvaccinated in US Unconcerned About Delta Variant: Poll

Evidence supports mandatory COVID vaccination for aged-care workers. But we need to make it easier too

Eat, time of day, weather: these are the most risky moments of a heart attack – Video