Surgeons removed a 2st 11lb (18kg) ovarian cyst from a diabetic woman during a five-hour operation.

The 55-year-old woman – who has not been named – thought she had just gained weight when she developed the enormous growth.

After finally seeking help, the woman – who weighs 25st 2lbs (160kg) – was too large to fit in a scanner, with many hospitals turning her away because the surgery looked too risky.

Dr Wael El Banna, who specialises in obstetrics and gynaecology in a Cairo hospital, took on the challenge, saying ‘removing large masses is my passion’.

The cyst, which was not cancerous, was taken out on March 20 last year, with the operation being said to have transformed the woman’s life.

Scroll down for video 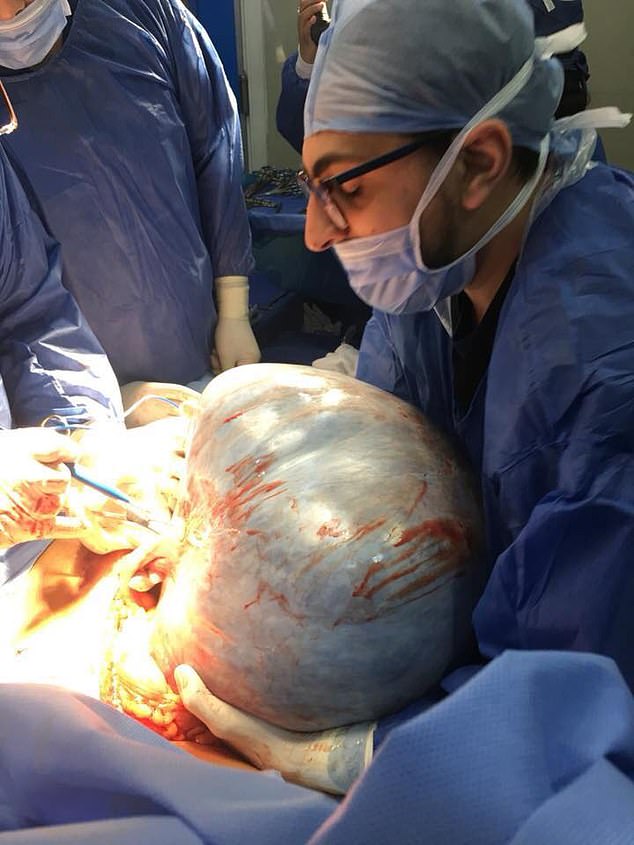 ‘She was extremely happy and her life totally changed.’

The woman – who also suffers from high blood pressure – was given blood-thinning medication during the surgery to reduce her risk of clots, however, medics worried this may cause excessive bleeding.

The procedure was made even more complicated due to the cyst being attached to the woman’s bowel and bladder.

After spending five hours under the knife and remaining awake for the procedure, doctors managed to remove the lump.

The woman was found to be thriving during a routine follow-up six months after the operation.

Although her ovarian cyst was not cancerous, medics believe it was just at the beginning of its growth and could have become malignant.

Dr Elbanna shared the video of him removing the woman’s cyst to raise awareness of ovarian growths.

‘Gaining weight suddenly could be [an] easily missed sign of ovarian problems,’ the 38-year-old said.

Dr Elbanna added women who feel full after small meals or notice their abdomens are growing at a rapid rate should see their doctor. 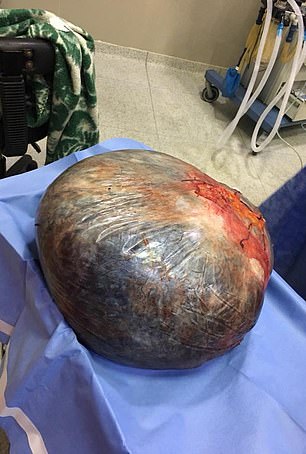 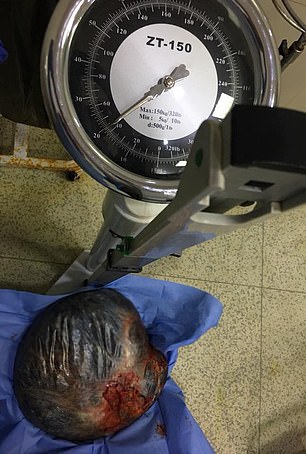 The ovarian cyst (left) was not cancerous but doctors warn it could have become malignant. It tipped the scales at an enormous 2st 11lb (18kg) (seen right) – making it bigger than a football 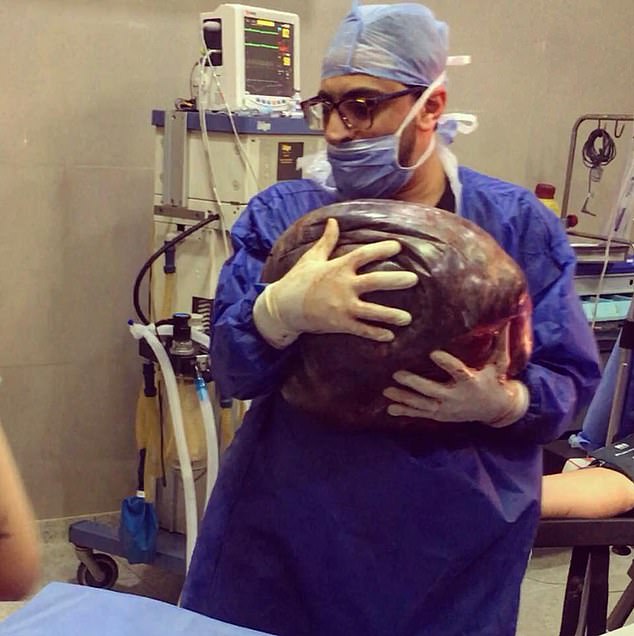 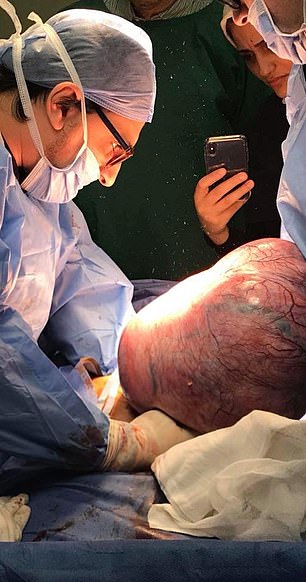 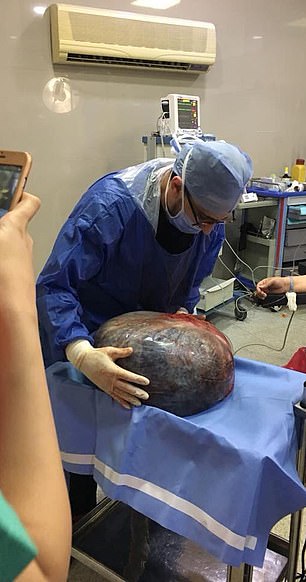 The ovarian cyst (pictured left and right) came from an unnamed diabetic woman who thought she had just gained weight. Many hospitals refused to remove the mass, saying it was too risky

WHAT IS AN OVARIAN TUMOUR

Ovarian tumours are abnormal growths that start in the ovary and may be cancerous or benign.

When cancerous, nine out of ten arise from the cell that line the ovaries and fallopian tubes – known as epithelial ovarian cancer.

High-grade serous ovarian cancer makes up six out of every ten epithelial cases. Most actually in the fallopian tubes. 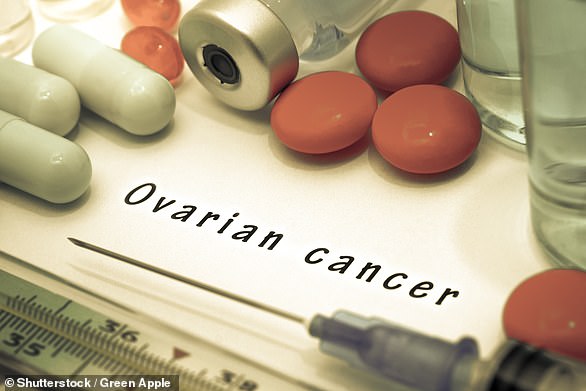 These growths tend to be treated via chemo and radiotherapy.

Low-grade serous cancers account for just one in ten epithelial cases. These are slow growing and tend to be in younger women.

Surgery is the most effective treatment for low-grade serous epithelial cancers.

Other types of ovarian tumours include:

Endometrioid: May be associated with endometriosis. A third of sufferers also have womb cancer or precancerous thickening of the uterus’ lining

Clear cell: Make up four per cent of ovarian tumours

Undifferentiated: Made up of cells that are very undeveloped, which makes it difficult to tell where they came from

Brenner: Account for 1-to-2 per cent of ovarian tumours. Are usually in women over 40 and are benign – less than five per cent are cancerous

Carcinosarcoma: Contain tissue that looks like both an epithelial and connective tissue cancer (sarcoma)

WHO warns of ‘alarming’ virus spread in Europe

Diet: Healthy way to lose weight in old age due to these food with a high protein content

Researchers succeed with a more inclusive approach to heart transplants

Symptoms of Vitamin B12 Deficiency