Doctors fear immunotherapy could actually make cancer WORSE: For many the treatment is a lifeline, but one airport worker, 31, believes it has handed him a death sentence

Last summer, Joseph McMullan learned that he would become one of the first British patients to receive CAR-T therapy – a breakthrough cancer treatment designed to turbo-charge the immune system to seek out and destroy tumour cells.

He believed he’d been thrown a lifeline after chemotherapy failed. The treatment has, with some justification, been dubbed a game-changer, a miracle cure, and even ‘magic’: in trials, some patients with seemingly untreatable and aggressive illness had been brought back from the brink.

Such is the excitement over its potential that forms of CAR-T therapy were rapidly approved last year by the NHS for adults – and children – with specific types of blood cancer.

Joseph, 31, has a type of lymphoma – cancer of the lymphatic system, which is part of the immune system. He was eligible for the treatment and felt optimistic. 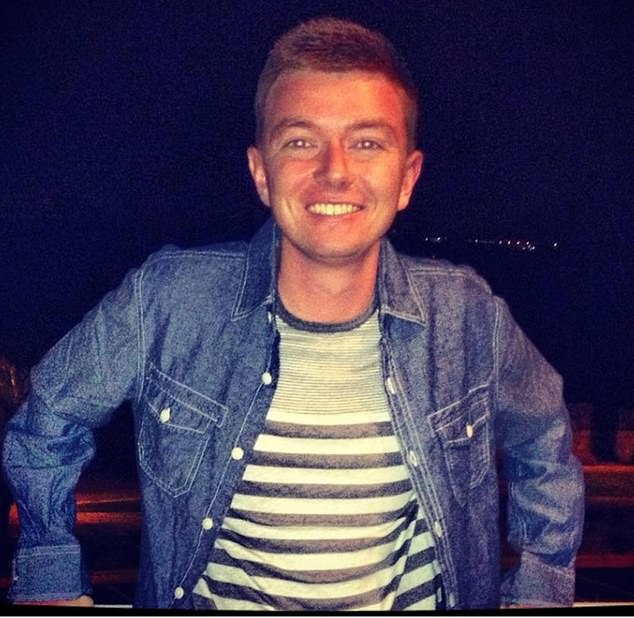 Joseph McMullan, 31, (pictured) has a type of lymphoma – cancer of the lymphatic system, which is part of the immune system

‘I’d heard the stories of people being cured,’ said the airport worker from Coatbridge, near Glasgow. ‘I was nervous, having such a new treatment but I just thought, it was the best chance I’d got.

‘I had everything crossed that it would work. My whole family did.’

Sadly, CAR-T didn’t work for Joseph. In fact, he believes it has made his illness worse. Rather than his immune system, it is his cancer that has become turbo-charged.

Within five weeks of undergoing the procedure – a two-month process in which immune cells are extracted, doctored in a lab and later reintroduced into the patient’s body – a tumour already in his abdomen began to grow rapidly.

‘It was a lump, about the size of a golf ball, just above my tummy button,’ says Joseph, speaking from his bed at Monklands Hospital in Airdrie. ‘At first, it seemed to shrink, but all of a sudden it’s growing. Now, it’s the size of my hand.’

The tumour is so large that it is crushing his kidneys and blocking the circulation to his pelvis.

‘I asked my doctors, “Why is this happening to me?” They didn’t know. I understand that my lymphoma was very aggressive from the start, but since having CAR-T, it’s just got so bad, so quickly. From where I’m sitting, it looks like the treatment made me worse.’

Of course, the cancer may have progressed this way, regardless of what treatment he had. But could he be right?

According to emerging evidence, the worrying answer is yes – with some cancer experts claiming that there is an ‘urgent need’ for more research to reveal exactly what is going on.

PROMISING RESULTS… BUT NO MAGIC BULLET

In the past few years, a raft of new cancer drugs have been ushered in – prompting astonishing stories of cures for forms of the disease once deemed hopeless: diseases such as malignant melanoma skin cancer, advanced lung cancer and prostate cancers.

These breakthrough treatments are, collectively, known as immunotherapy. Some drugs – like those used in CAR-T therapy – prime the body’s immune cells to attack cancer. Others act on tumour cells themselves. These can work alone or in combination, offering patients a wealth of treatment possibilities. 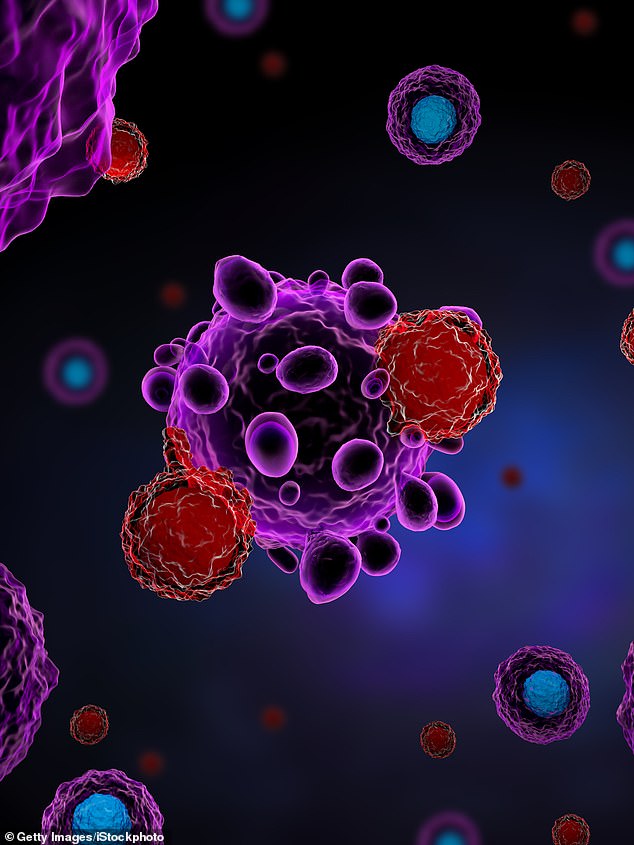 They are part of a wider approach, known as precision medicine: bespoke protocols involving tests that help doctors understand the genetic make-up of each patient’s specific disease, helping them attack tumours with pinpoint accuracy. A handful of immunotherapy drugs have already been approved in the UK. And with hundreds of current trials into new uses for existing drugs, and new medications being developed, there will soon be many more.

The results speak for themselves: in September, new figures showed that half of people with advanced melanoma skin cancer survive the disease. A decade ago, just one in 20 patients lived more than five years after diagnosis, and the turnaround is, largely, thanks to immunotherapy.

A similar picture is emerging for lung cancer. So far, good news for patients who fail to respond to conventional approaches; surgery, chemotherapy and radiotherapy.

But immunotherapy is not a magic bullet. Doctors now understand that tumour cells have their own genetic ‘fingerprint’ – and that these can vary widely, even in cancers of the same type.

Immunotherapy drugs typically work only on specific genetic subsets, which means that only a minority of patients actually respond to each new treatment.

Matching an individual’s cancer to the right therapy is key, or else treatment can have no benefit. The side effects can also be severe – some types of immunotherapy can cause life-threatening inflammation and damage to the liver, kidneys, colon and even brain.

And, according to a growing body of evidence, there is an even darker side. Research suggests that, in the case of some drugs, patients may experience hyperprogression: instead of killing the cancer, the drug seems to trigger uncontrollable growth of the tumours. This reaction is shockingly fast, and seems to be fatal in many cases.

DOES IT WORK? WE JUST DON’T KNOW

Hyperprogression is such a new phenomenon that an exact definition has not yet been agreed.

A doubling of growth rate, or 20 to 50 per cent increase in ‘tumour burden’ – the size or number of tumour cells in the body – within two months of having immunotherapy, have been suggested. But some doctors doubt that hyperprogression even exists, arguing that these patients would possibly have deteriorated rapidly, regardless of what treatment they had. Professor Gary Middleton, an oncologist who has led trials into immunotherapy drugs, is convinced it does happen.

‘I have been using these drugs for well over five years and I have had one or two patients who, hand on heart, I am sure have suffered from hyperprogression,’ he said.

‘I’ve had a good idea about the trajectory of their disease prior to treatment, and it is clear that immunotherapy has made their cancer worse.’ 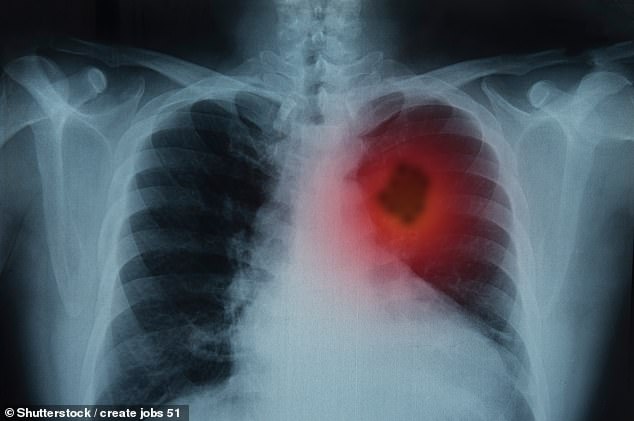 The situation is complicated further by the fact that other patients given immunotherapy suffer from something called pseudoprogression. Prof Middleton, who is based at the University of Birmingham’s Institute of Immunology and Immunotherapy, explained: ‘Sometimes we give treatment and then, a few weeks later, on scans it looks like the tumour has grown.

‘In fact, we think what we’re seeing is inflammation at the tumour site caused by huge numbers of immune cells rushing to it.

‘These patients then suddenly get better, as the immune cells do their job and kill the cancer. It’s actually very difficult to tell the difference between pseudoprogression and true disease progression, so we now often avoid doing scans early on.’

Doctors also say that patients who experience some of the worst side effects of immunotherapy – who feel the worst – also, often, respond the best to the treatment.

But there is a genuine concern now that immunotherapy can and does make cancer spiral out of control in a minority of cases.

So how common is hyperprogression, and who is most a risk? The truth is, it’s too early to say.

Just three studies have been published so far on the subject and all focus on the effects of checkpoint inhibitors, a type of immunotherapy given via intravenous drip that interferes with the signals that tumour cells usually use to hide from the body’s defences.

These drugs, which can cost upwards of £80,000 to treat each patient, are now given on the NHS for skin, lung, bladder and kidney cancer, and types of lymphoma.

One study, involving patients with a variety of cancers, found that of 131 cases, nine per cent had suffered ‘aggressive hyperprogression’.

Later research that looked into head and neck cancers specifically found the figure could be as high as 29 per cent, while another study found that five out of 25 patients with digestive-system cancer suffered hyperprogression.

Older patients seem to be more at risk, but as relatively few patients have had immunotherapy so far, numbers studied are small.

And it is not yet clear from the research whether hyperprogression is a true side effect, or may have occurred anyway.

Prof Middleton agrees. ‘The treatment is meant to activate good immune cells, to kill the cancer. But it might be in some cases that we end up activating cells that inhibit the immune response, which allows the cancer to grow faster.

‘We just don’t know, and it’s important that we find out, so we can find tests to flag up which patients are most at risk.’

After he posted about his predicament on a lymphoma Facebook group, one of the members – a stranger – took matters into her own hands, and having read that the drug had been recently approved in the UK, contacted manufacturer Roche.

They agreed to send the medication, and Joseph had his first dose last week. However he has now been told it is not working.

He agreed to talk publicly in the hope that ‘someone else will get in touch with another suggestion for anything that could help me’.

Joseph was first diagnosed with non-Hodgkin’s lymphoma at the end of 2018. He had been suffering worsening symptoms, which he believed at first were related to a gut condition he suffered from – ulcerative colitis. After two emergency hospital admissions, due to a perforated bowel, tests revealed that he had blood cancer. ‘It came as a complete shock,’ he admits.

His disease was resistant to aggressive chemotherapy, so he was referred to Manchester Royal Infirmary, a specialist cancer centre, where he received CAR-T therapy. Today, he is bed-bound, reliant on dialysis due to the damage to his kidneys caused by his abdominal tumour, and suffering near constant pain.

‘My whole body is swollen, so it’s hard to move,’ he says, wearily.

‘I’ve heard about cases like mine, where immunotherapy has made cancer grow faster. It killed them. And I’m worried I’m next.’

His voice breaks, and he takes a moment to compose himself.

‘I’m 31. I’ve got so much more life to live… I hope. I’m grateful for everything I’ve had, in terms of treatment, and I don’t regret anything, but it’s hard not to feel desperate.

‘I just want another chance.’

If you can help Joseph, please email [email protected]

Belly fat slows the Slimming – diet-advice from the experts, the promise of success

It doesn’t take much for soldiers to feel cared for: Researchers conduct randomized controlled trial of caring texts