Doctors told to write to their patients in plain English

Doctors are notorious for having hard-to-read handwriting, and now experts warn they’re using too many long words as well.

Medics working in hospitals have been told to write to their patients in plain English which is easy to understand.

And instead of writing to a patient’s GP and sending the patient a copy of the letter, consultants should write directly to their patient and address it to them.

This will involve patients more in their own care and help them to remember what was discussed in the meeting, health experts say. 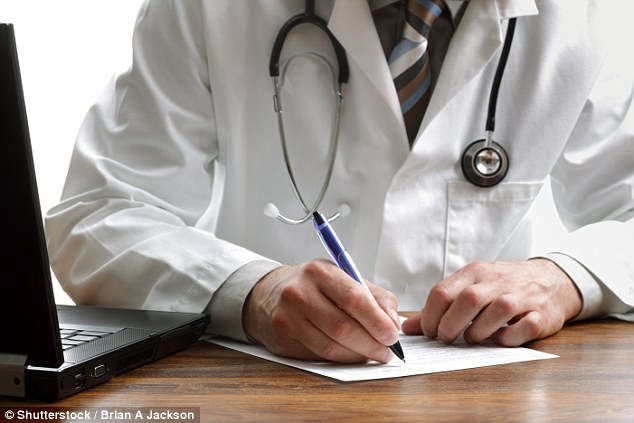 Doctors have been told to write to their patients directly instead of via the GP who referred them, and to avoid using complicated jargon or Latin words and instead write in plain English

Five million letters a month are sent between doctors or to patients after outpatient appointments, and doctors have been told to change the way they’re written.

The Academy of Royal Medical Colleges (AoRMC) says writing directly to patients and putting advice in plain English is better for both doctors and patients.

The Academy, which sets the standards for Britain’s 250,000 doctors, advised that doctors avoid the use of Latin, technical jargon and acronyms.

GPs would spend less time trying to understand other doctors’ advice, and patients would feel more in control of their own care and able to communicate, the AoRMC said.

But these can be full of overcomplicated language, and can cause offence by using labels or writing insensitively.

For example, the AoRMC has warned doctors not to label people diabetics and instead to say ‘you have diabetes’.

‘The change may seem small but it has a big effect’

And instead of medical phrases such as ‘your presenting complaint was’, doctors should instead say ‘you went to your GP because’.

‘The change may seem small but it has a big effect,’ said Dr Hugh Rayner, a kidney specialist, told the BBC.

HOW DOCTORS SHOULD CHANGE THE WAY THEY WRITE

The Academy of Royal Medical Colleges has issued advice telling hospital doctors how to make their letters simpler for patients to understand.

This is the advice given to doctors:

Dr Rayner is leading the AoRMC’s Please Write To Me initiative, and began writing directly to his patients in 2005.

He insisted the new steps were not ‘dumbing down,’ but represented an effort to ‘cut through the jargon’ that might confuse patients, The Times reported.

He said: ‘Writing to patients rather than about them changes the relationship between doctor and patient.

‘It involves them more in their care and leads to all sorts of benefits.

‘Millions of clinic letters are written every month in the NHS so this change could have a big impact.’

And the academy says Latin should also be cut out of doctors’ letters – for example instead of the abbreviation ‘bd’ medics should just say ‘twice a day’.

Doctors should consider phoning their patients if they have more serious news, the advice adds, to avoid causing upset by writing casually about bad conditions.

Patients should ask their hospital to change the way they write if they want to hear directly from their doctor, the AoRMC recommends.

Chairman of the academy’s patient committee, Peter Rees, said the change would help people ‘take ownership of their care.’

He added: ‘It helps patients remember what was discussed in the outpatient clinic and gives them confidence that the doctor sees them as a person rather than a case.’

These changes to doctors’ letters would be in keeping with the General Medical Council’s guidance on good medical practice.

The GMC tells medics: ‘You must give patients the information they want or need to know in a way they can understand.’

In its report the AoRMC said: ‘Doctors who have adopted the practice say their communication style has become more patient-centred.

‘GPs find the letters easier to understand and spend less time interpreting the contents for the patient.

The 10 Biggest Signs You Are In A Financial Rut

A smooth move makes for a happier child

Collagen in your coffee? A scientist says forget it

How to beat coronavirus? Sing Happy Birthday as you wash your hands

What is required for pain killers