Feeding mice a daily portion of white button mushrooms boosts their levels of a gut bacteria that is involved in the production of glucose, a study found.

According to the researchers, mushrooms act as a prebiotic, which are indigestible food ingredients that ‘fertilise’ the growth of bugs in the digestive tract.

Type 1 diabetes occurs when glucose levels rise due to a lack of the hormone insulin, which controls glucose’s movement in and out of cells. In type 2 diabetes, insulin levels are insufficient or the body does not respond to the hormone.

Around 3.2 million people in the UK are diagnosed with diabetes, of which 10 per cent have type 1. Type 1 diabetes affects approximately 1.25 million people living in the US, while 9.4 per cent of the population have type 2. 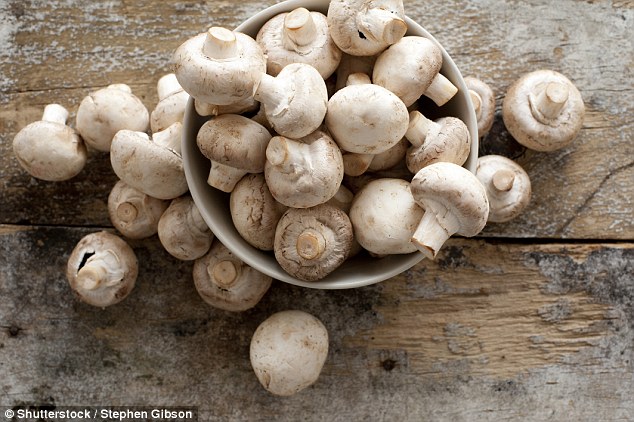 The researchers analysed two types of lean mice. The first had gut bacteria, while the others did not and were ‘germ free’.

Professor Cantorna explained: ‘You can compare the mice with the microbiota with the germ-free mice to get an idea of the contributions of the microbiota.’

All of the rodents were fed a daily serving of mushrooms, which is the equivalent of around a 85g portion for humans. It is unclear how long the animals were fed the edible fungi for.

‘Any change you make to the diet, changes the microbiota’

Results, published in the Journal of Functional Foods, suggest eating mushrooms increases levels of the bacteria Prevotella in mice.

Prevotella produces the acids propionate and succinate, which play a role in the expression of genes that manage glucose production.

The researchers hope to repeat the experiment in obese mice, as well as humans.

Mushrooms aside, Professor Cantorna added: ‘It’s pretty clear that almost any change you make to the diet, changes the microbiota.’

WHY IS IT IMPORTANT FOR DIABETES PATIENTS TO MEASURE THEIR GLUCOSE LEVELS?

Diabetes is a serious life-long condition that occurs when the amount of sugar in the blood is too high because the body can’t use it properly.

Patients have to regular monitor their glucose levels to prevent them from developing any potentially fatal complications.

Blood glucose levels should be between the ranges of 3.5–5.5mmol/L before meals and less than 8mmol/L, two hours after meals.

Hypoglycemia (when blood sugar drops below 4 mmol/L) can occasionally lead to patients falling into comas in severe cases.

However, it most often can be treated through eating or drinking 15-20g of fast acting carbohydrate, such 200ml of Lucozade Energy Original.

Sufferers can tell they are experiencing a hypo when they suddenly feel tired, have difficulty concentrating or feel dizzy.

Type 1 diabetes patients are more likely to experience a hypo, because of the medications they take, including insulin.

Hyperglycemia (when blood sugar is above 11.0 mmol/L two hours after a meal) can also have life-threatening complications.

It happens when the body either has too little insulin, seen in type 1, or it can’t use its supply properly, most often in type 2.

In the short-term, it can lead to conditions including ketoacidosis – which causes ketones to be released into the body.

If left untreated, hyperglycemia can lead to long-term complications, such as impotence and amputations of limbs.

This comes after research released last June suggested scientists have created an insulin pill that could signal the end of injections for diabetics.

Unlike previous failed attempts to make oral diabetes medications, the pill survives the acidic environment of the stomach to release insulin into the bloodstream, according to the scientists.

After rats were given the unnamed pill, their blood-glucose levels fell by 38 per cent in two hours and 45 per cent after 10 hours, compared to a 49 per cent decrease in 60 minutes among those given insulin injections, a study found.

The researchers believe the drug may overcome the pain and needle phobias some diabetics experience.

Dr Mark Prausnitz, from the Georgia Institute of Technology, who was not involved in the study, said: ‘This study shows remarkable results where insulin given by mouth works about as well as a conventional injection’.

It is unclear when the drug may be available and if it would benefit type 1 or 2 diabetes patients.

U.S. medical supply chains are fragile in the best of times—COVID-19 is testing their strength

Targeting immune cells may be potential therapy for Alzheimer’s

A low-fat, high-carb vegan diet could speed up your metabolism and boost weight loss, a new study says