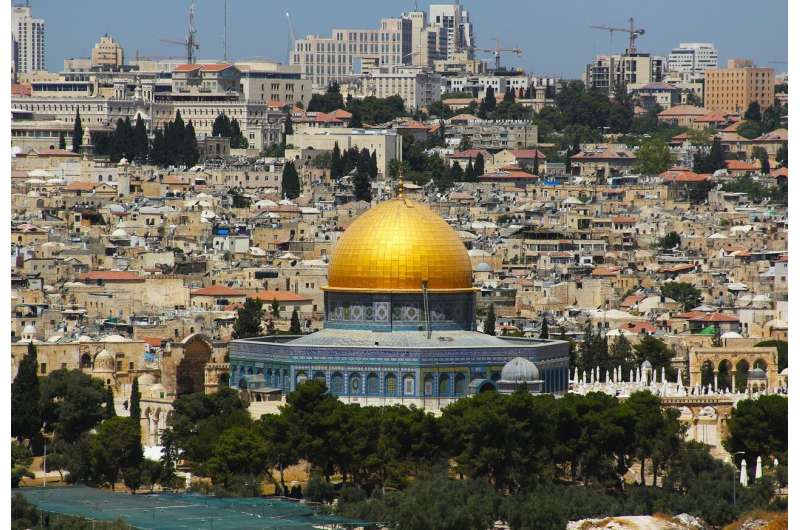 Israelis stepped into the streets without masks on Sunday for the first time in a year, a key milestone as the country vaccinates its way out of a coronavirus nightmare.

“It’s very strange but it’s very nice,” said Eliana Gamulka, 26, after getting off a bus near the busy Jerusalem shopping boulevard of Jaffa Street and removing her face covering.

“You can’t pretend that you don’t know anyone any more,” she smiled.

With over half the population fully vaccinated in one of the world’s fastest anti-COVID 19 inoculation campaigns, the health ministry announced on Thursday that masks would no longer be required in public outdoor spaces.

For Gamulka, a project manager, the good news came at the perfect time: just two weeks before her wedding.

It will be “very nice to celebrate with everyone, now without masks,” she said. “The pictures will be great! I’m very relieved. We can start living again.”

The vaccination of close to five million people has sent Israel’s coronavirus caseload tumbling from some 10,000 new infections per day as recently as mid-January, to around 200 cases a day.

That has allowed the re-opening of schools, bars, restaurants and other indoor gatherings—although masks are still required in indoor public spaces.

And even before Health Minister Yuli Edelstein’s announcement came into effect, punters in the popular bars of Jerusalem’s Mahane Yehuda market were mask-free and smiling on Thursday evening.

Yet on Sunday, office worker Ester Malka said she wasn’t quite ready to let down her guard.

“We’re allowed, but I’m still afraid, I got used to (wearing a mask),” she said.

“I feel like it’s part of my life. We’ll see what happens when everyone has taken them off. If it goes well for a couple of months, then I’ll remove mine.”

Israel just months ago had the world’s highest infection rate, a coronavirus outbreak that left 6,300 people dead among 836,000 cases.

But the Jewish state sent its coronavirus caseload tumbling after striking a deal for a vast stock of Pfizer/BioNTech jabs.

In exchange, it agreed to pay above market price and share data it gathers on the recipients, using one of the world’s most sophisticated medical data systems.

Since December, some 53 percent of Israel’s 9.3 million people have received both doses of the jab, including around four-fifths of the population aged over 20.

As recently as January it was registering 10,000 cases per day.

But as the effects of mass vaccination kicked in, by March it was able to implement a gradual re-opening.

“There’s no better advertisement for Pfizer,” said Shalom Yatzkan, a computer programmer who had been in quarantine after catching the virus.

“I was sick for three days, I had neck pains and felt weak,” he said as he walked through central Jerusalem. “I just hope the new variants don’t catch up with us.”

Another Sunday landmark in Israel’s exit from coronavirus restrictions was the full resumption of the country’s educational system, without restrictions on the numbers of pupils in classrooms.

Speaking at a Jerusalem high school, Prime Minister Benjamin Netanyahu hailed the “festivity” of the day for the schools, while warning of complacency.

“We’re not done with the coronavirus yet, since it can return,” he said, stressing the need to obtain “millions more vaccinations”.

“Sooner or later, we’ll need another vaccination (dose),” he said.

The situation in Israel is in stark contrast to the occupied West Bank and the blockaded Gaza Strip, where infection rates remain high and vaccinations are low.

Gaza, which is ruled by the Islamist movement Hamas, said on Sunday it had recorded 23 deaths over the past 24 hours—the highest ever daily coronavirus toll, with 761 deaths since the start of the pandemic.

Rights groups have urged Israel to supply vaccines to the 4.8 million Palestinians living there, but Israel says that falls under the Palestinian Authority’s responsibility.

It has however vaccinated over 105,000 Palestinian workers who hold permits for employment in Israel and the settlements.

In Jerusalem, meanwhile, Gamulka was enjoying the simple pleasure of new-found freedoms.

Meat consumption is changing but it’s not because of vegans

How much sugar lurks inside your favourite chocolate yule log?