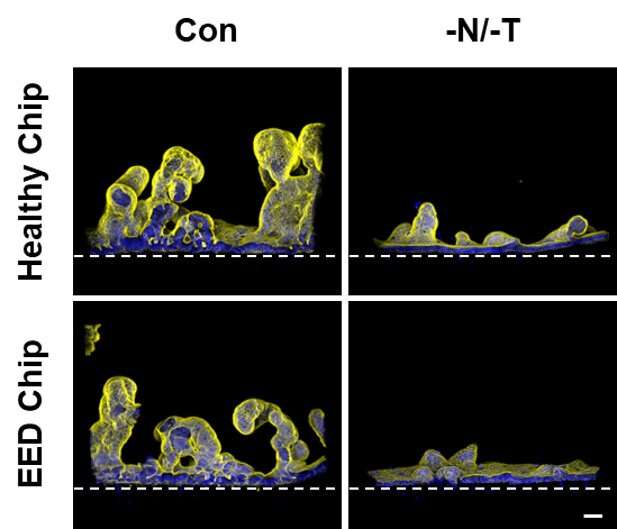 Millions of children in low- and middle-income nations suffer from environmental enteric dysfunction (EED), a chronic inflammatory disease of the intestine that is the second leading cause of death in children under five years old. EED is a devastating condition that is associated with malnutrition, stunted growth, and poor cognitive development, permanently impacting patients’ quality of life. In addition, oral vaccines are less effective in children with EED, leaving them vulnerable to otherwise preventable diseases. While some cases of EED are treatable by simply improving a patient’s diet, better nutrition doesn’t help all children. A lack of adequate nutrients and exposure to contaminated water and food contribute to EED, but the underlying mechanism of the disease remains unknown.

Now, a team of researchers at the Wyss Institute at Harvard University has created an in vitro human model of EED in a microengineered Intestine Chip device, providing a window into the complex interplay between malnutrition and genetic factors driving the disease. Their EED Chips recapitulate several features of EED found in biopsies from human patients, including inflammation, intestinal barrier dysfunction, reduced nutrient absorption, and atrophy of the villi (tiny hair-like projections) on intestinal cells.

They also found that depriving healthy Intestine Chips of two crucial nutrients—niacinamide (a vitamin) and tryptophan (an essential amino acid)—caused morphological, functional, and genetic changes similar to those found in EED patients, suggesting that their model could be used to identify and test the effects of potential treatments.

“Functionally, there is something very wrong with these kids’ digestive system and its ability to absorb nutrients and fight infections, which you can’t cure simply by giving them the nutrients that are missing from their diet. Our EED model allowed us to decipher what has happened to the intestine, both physically and genetically, that so dramatically affects its normal function in patients with EED,” said co-first author Amir Bein, R.D., Ph.D., a former Senior Postdoctoral Research Fellow at the Wyss Institute who is now the VP of Biology at Quris Technologies.

The research is published today in Nature Biomedical Engineering.

The EED Chip project grew out of conversations between the Wyss Institute’s Founding Director Donald Ingber, M.D., Ph.D. and the Bill and Melinda Gates Foundation, which has an established interest in supporting research to understand and treat enteric diseases. Recognizing that there had been no in vitro studies of EED to study its molecular mechanisms, a Wyss team of more than 20 people set about creating a model of EED using its Human Organ Chip technology developed in Ingber’s lab.

They started with the Wyss Institute’s Intestine Chips, first developed in 2012, which consist of parallel hollow microfluidic channels running through a flexible polymer material. One channel is lined with human intestinal epithelial cells, while the other channel is lined with human blood vessel cells. A medium mimicking blood is flowed through the blood vessel chip to keep the cells alive, and a permeable membrane between the two channels allows nutrients and chemical signals to travel between the two tissues. To replicate EED in these chips, the researchers lined the epithelial channel of Intestine Chips with cells derived from surgical biopsies of patients with EED, which the Gates Foundation helped to source from Aga Khan University in Pakistan. They also created Healthy Chips lined with intestinal epithelial cells from healthy children for comparison.

“Because EED is so prevalent in parts of the world where malnutrition and poor sanitation are big problems, it was unclear what role, if any, genetics or epigenetics plays in the disease. We knew that there was a group of patients who just don’t respond to nutrition, and thought that cells from their intestines might respond differently to malnutrition when compared to cells from the intestines of healthy children,” said co-first author Cicely Fadel, M.D., Ph.D., an Attending Neonatologist at Beth Israel Deaconess Medical Center, Instructor in Pediatrics at Harvard Medical School (HMS), and former Clinical Fellow working with Ingber at the Wyss Institute. She and her co-authors aimed to solve that mystery by studying the gene expression patterns of the cells in their EED Chips vs. Healthy Chips.

The team found that 287 genes in the EED Chips showed different expression levels. Among them were genes associated with inflammation, intestinal injury, and the junctions between cells. When they compared the EED Chips’ genetic profile with a clinical genetic signature from patients with EED whose disease was not resolved by nutritional intervention, they found some overlap between the genes on their chips and the genes in the samples.

Then, to mimic the malnutrition that many EED patients experience, they changed the medium that was supplying nutrients to their chips by removing niacinamide and tryptophan, both of which are crucial to healthy growth in children and maintenance of health in adults.

The effect was striking.

When they were cultured with a nutrient deficiency, the Healthy Chips displayed 690 genes with different expression patterns compared to their counterparts that got full nutrition, and in the EED Chips, a whopping 969 genes had different expression patterns. Six of the top ten genes that were upregulated in the clinical EED gene signature from patient biopsies were also upregulated in the EED Chips cultured with nutrient deficiency.

“The agreement between our nutrient-deficient EED Chip signature and the signature found in human patients was really exciting. We are not only able to recreate EED intestinal form and function, but we are also doing it using the same genetic pathways that are operating in human patients. That opens up the possibility that we could test drugs and other treatments on the EED Chip and get a response that could be similar to what you would see in patients,” said Fadel.

Teasing out nature vs. nurture

The scientists then analyzed the chips from multiple angles to determine exactly which differences between the EED Chips and Healthy Chips were caused by nutrient deficiency alone versus inherent gene expression differences.

Some effects of nutritional deficiency seemed to affect the Healthy and EED Chips equally. Both types of chips displayed an upregulation of certain genetic pathways associated with inflammatory chemokine production and amino acid starvation responses, dramatically reduced growth of the villus-like structures normally found on their surfaces, and produced a much thinner mucus layer. Both types of chips became “leaky” as the junctions between their cells were disrupted and allowed fluids to seep through and displayed changes in fatty acid absorption.

But the EED Chips displayed some unique differences in their responses to nutritional deficiency, all of which matched traits seen in human EED biopsies. The intestines of EED patients have reduced development of their internal surfaces (known as the brush border) and impaired cell growth, and the downregulation of genetic pathways associated with both of those processes were observed in the EED Chips. Paneth cells, which help regulate the microbiome in the intestine, are known to be depleted in EED patients, and Paneth cell markers were reduced in the EED Chips. Amino acids transporters were also downregulated.

The team found that EED Chips produced lower levels of inflammatory cytokines compared to Healthy Chips grown under the same conditions. But once both chips were exposed to nutritional deficiency, the EED Chips produced significantly more cytokines compared to Healthy Chips. Inflamed tissue requires more calories to maintain and renew, and EED patients with gut chronic inflammation may not be able to consume enough calories to both maintain their tissues and support their growth, contributing to stunting. This inflammation may also reduce the intestine’s ability to process oral vaccines.

Even when the full range of nutrients was available, EED chips showed a reduced ability to absorb those nutrients in the epithelial channel and transfer them into the vascular channel compared to the Healthy Chips, further suggesting that the EED tissue’s function was inherently compromised.

“One of the major contributions of this study to EED research and treatment efforts is that we were able to attribute various cellular responses specifically to nutritional deficiency, genetic changes in the intestinal cells, or a combination of both—distinctions that have not been possible to make in clinical studies or animal models,” said Bein. “The EED gene signature by itself wasn’t enough to fully replicate EED in our chips—the additional exposure to malnutrition was necessary. This implies that nutritional deficiency itself disrupts nutrient processing, which creates a feedback loop that further worsens nutritional uptake in EED patients.”

The team is continuing to study EED with their model, and plans to incorporate immune cells to more deeply study inflammation and its interplay with nutrition, as well as how it impacts the body’s response to vaccines. They are also working on adding a microbiome from patients with EED to the chips to study how changes to the microbiome can affect the disease.

“Every regular meeting that our team has had with the Gates Foundation about this project over the years has started with a slide show of real children who are suffering from EED. Those children are our customers—patients drive everything that we do at the Wyss Institute, and motivate us to work hard, often for years, on creating solutions to difficult problems that can dramatically improve their quality of life. We won’t rest until we’ve found that solution,” said Ingber, who is also the Judah Folkman Professor of Vascular Biology at HMS and Boston Children’s Hospital (BCH), as well as the Hansjörg Wyss Professor of Bioinspired Engineering at Harvard’s John A. Paulson School of Engineering and Applied Sciences (SEAS).

High cholesterol can lead to deadly atherosclerosis – can the condition be reversed?

Baby survives after being born with organs the ‘wrong way round’

Despite risk of birth defects, HIV drug should be considered for women in South Africa

BuzzRx® Gives Over $500K to Animals in Need

Insight into how often COVID-19 spreads through households