The postcode lottery of mental health care in England: Vulnerable patients in some parts of the country get HALF the NHS funding of those in better-resourced areas

Mental health care in England is a ‘postcode lottery’, experts have warned on the back of a damning report.

The analysis, by mental health charity Mind, looked at investment across 42 NHS regions in England.

It revealed patients in some parts of the country get half the funding of those living in better-resourced areas.

Just £124 was spent per patient in Surrey Heartlands last year, compared with the £220 allocated by South Yorkshire and Bassetlaw.

The findings come after billions of pounds were pumped into mental health in recent years. 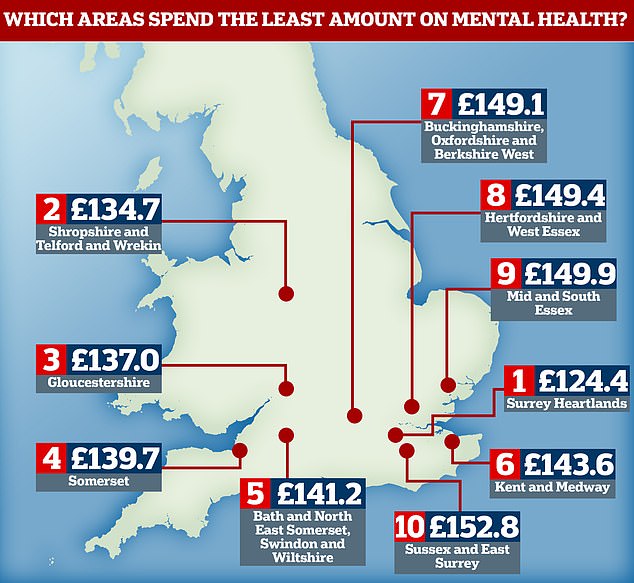 The 10 lowest spenders per person, per year: Surrey Heartlands allocated the least amount of funding to mental health patients, with Shropshire, Telford and Wrekin and Gloucestershire close behind

The charity found spending was rising in every region, but said the differences were huge and would affect quality of care.

WHY ARE MENTAL HEALTH PROBLEMS SOARING?

Mental health problems are a growing public health concern in the UK and around the world.

The overall number of people with mental health problems has not changed significantly in recent years, but figures spanning over decades show some trends.

Mental health charity MIND say it appears that how people cope with mental health problems is getting worse as the number of people who self-harm or have suicidal thoughts is increasing.

Economic uncertainty, the influence of social media and expectations of what life should be like have all been suggested as possible causes by experts.

Young people today are more likely to suffer from depression or self-harm, as well as have obesity or sleep disorders. But they drink less, take fewer drugs, and are less likely to be vandals or violent than their elders of just a decade before, a large-scale study by the University College London found.

In 2016, the NHS committed to investing £1.6billion to tackling mental health, and last year a further £2.3billion per year was announced as part of its 10-year plan.

Mind’s report showed all areas were increasing their mental health budgets in line with the national increase in spending – part of a requirement set by the senior leadership in the NHS.

But the charity said those figures masked the massive disparities that still existed, according to projected spending levels in 2018-19.

The findings have been released today to coincide with Mental Health Awareness Week.

Geoff Heyes, head of health policy and influencing at Mind, said there had been ‘positive change’ but said he was concerned by the ‘postcode lottery’ that was still present.

He said: ‘The treatment you get shouldn’t depend on where you live. The NHS and government have made it clear that mental health is a priority.

‘Some local variation is to be expected but the scale of the difference is huge and we know that the need outstrips resource even in the areas that are performing well.

‘We are seeing some positive change on the ground, across the country, but a long-term historic postcode lottery still exists.’

A spokesperson for NHS England said spending has and will continue to increase.

They added: ‘The fact is overall spending on mental health across the country has gone up year on year, and every local area is on track to meet the mental health investment standard – seeing an increasing number of people in good time.

‘As Mind also acknowledge, funding for mental health services will grow faster than the overall NHS budget over the next five years – with a new ringfenced local investment fund worth at least £2.3bn a year by 2023/24 helping an extra 345,000 young people and 370,000 more adults as part of the Long Term Plan.’

It comes after the Children’s Commissioner warned last month that teenagers with mental health conditions are being refused NHS treatment unless they have tried to take their own lives.

Anne Longfield said clinics were struggling to cope with an epidemic of self-harm, anxiety and depression, and are now turning patients away.

Her own research found a third of health trusts have slashed funding for children’s mental health despite it being a Government priority.

One in six adults in the UK experiences a mental health problem in any given week, according to Mental Health Foundation.

Mental-health conditions affect a similar number of people in the US.

Watermelon allergy: Symptoms, diagnosis, and what to avoid

Coronavirus symptoms: What is it like to have coronavirus? Patient reveals all

The Only Pregnancy Books You Actually Need to Read

More Australians are asking each other this important question

Pharmacist vaccination starting in the autumn against influenza