Structured Illumination Microscopy (SIM) is a tool which breaks the diffraction resolution barrier to provide resolutions of up to 20nm. 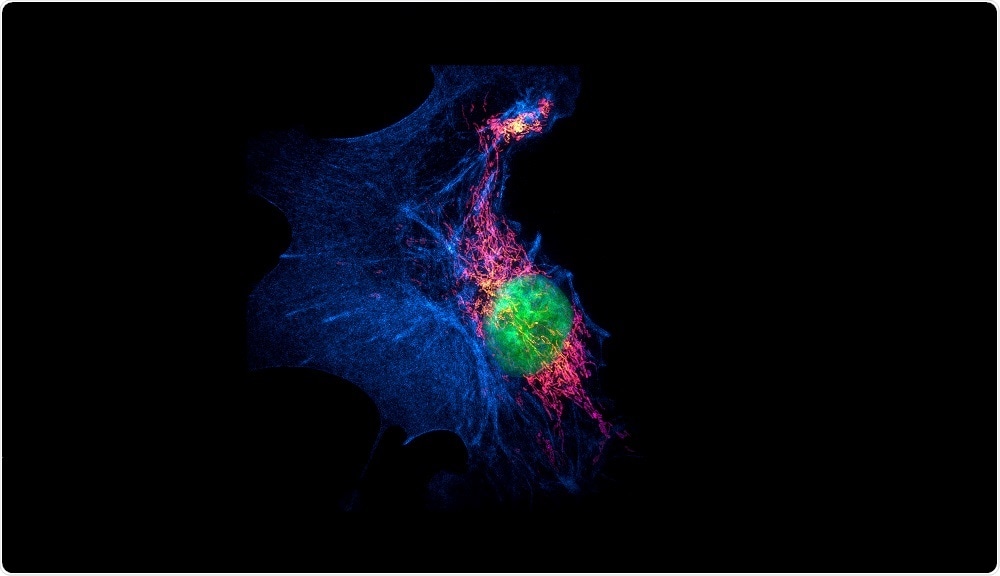 The resolution of conventional microscopes is limited by the diffraction of light. This resolution is 200 nm laterally and 500 nm in the axial direction. Thus, it is difficult to visualise any object which lies below the range of this resolution.

The size of most of the structures inside a cell is below this limit, which makes light microscopy an inappropriate tool to visualize sub-cellular structures.

The light then undergoes interference (light waves superimpose on each other leading to a light of greater or lesser wavelength) with each other at the sample plane. This pattern of light created by the superimposition of light on the sample is called ‘Moire effect’.

Several such raw images are taken by changing the angle or orientation of this ‘structured light’. This is done by changing the angle of the movable diffraction grating. Several such images taken at different angles are then reconstructed post-imaging to generate a super-resolved image. The high frequency image extracted from the raw data can have almost double the resolution of the conventional diffraction limited microscopes.

The rate of imaging is very fast for both 3D imaging and 4D imaging. The fourth dimension refers to time, or time-lapse imaging. This factor is very crucial for imaging live samples where biological processes may need to be captured at high speeds.

Conventional fluorophores can be used

Fluorophores which are used for conventional microscopy can be used for imaging in SIM. This is an added advantage as no additional resources have to be employed for preparing samples. This is different from some of the other super-resolution microscopy techniques, where specialized fluorophores have to be generated.

Simultaneous use of multiple fluorophores

In SIM, three fluorophores can be imaged simultaneously. This means that three intra-cellular structures can be tracked together using SIM, while this is usually limited to one or two fluorophores in case of other super-resolution tools.

It is possible to image live samples and record different cellular processes. This feature is not available in some of the super-resolution techniques, such as STED.

The lateral resolution achieved by other super-resolution techniques, such as STORM/PALM and STED is almost 20 nm which is higher than SIM.

The super-resolution is achieved not optically, but through image processing after the imaging. Thus, artifacts could be generated during the image reconstruction. Also, errors in grating, calibration of the system, mismatch of the refractive index, or poor quality of the sample can also generate errors in the final image.

It is very sensitive to out of focus light thus the signal is not very clear if the sample is densely populated with the molecules being imaged.

SIM requires a processing time to 1 to 30 seconds when the image reconstruction can be applied to finally generate the final image.

Dr. Surat graduated with a Ph.D. in Cell Biology and Mechanobiology from the Tata Institute of Fundamental Research (Mumbai, India) in 2016. Prior to her Ph.D., Surat studied for a Bachelor of Science (B.Sc.) degree in Zoology, during which she was the recipient of anIndian Academy of SciencesSummer Fellowship to study the proteins involved in AIDs. She produces feature articles on a wide range of topics, such as medical ethics, data manipulation, pseudoscience and superstition, education, and human evolution. She is passionate about science communication and writes articles covering all areas of the life sciences.

New coronavirus mutant raises concerns in India and beyond

How FDA is evolving to keep pace with innovation in healthcare

Type 2 diabetes: The one major fast fix to reverse the condition