UK is now at the ‘bottom of the league’ when it comes to improvements in life expectancy, reveals official analysis of world’s 20 leading economies (and the US is a close second bottom)

The UK has now fallen to the ‘bottom of the league’ when it comes to improving life expectancy – and the US is almost as bad, official figures reveal.

Rises in life expectancy at birth for women is the lowest among 20 of the world’s top economies, and only behind the US for men.

Former pensions minister Sir Steve Webb has today urged Government officials to investigate what is behind the downward trend.

Huge improvements were seen in life expectancy across the last century, due to healthier habits – but rates have been on the decline in recent years.

Statisticians warn the slowdown in the UK and US is also ‘evident’ in a number of countries across Europe, including Germany.

The analysis of 20 countries, including Australia, reveals the majority have seen mortality rates decline at a slower rate since 2010. 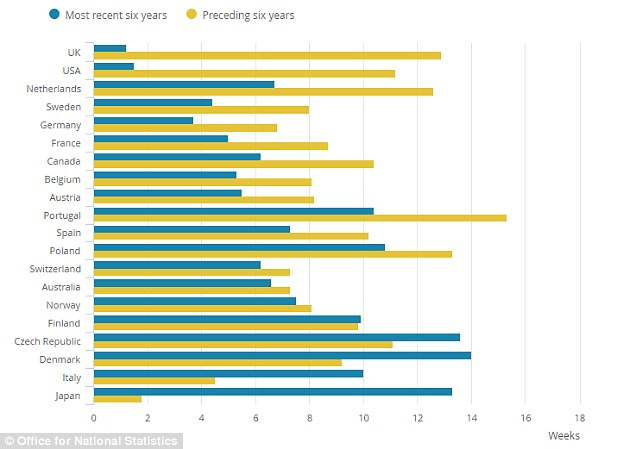 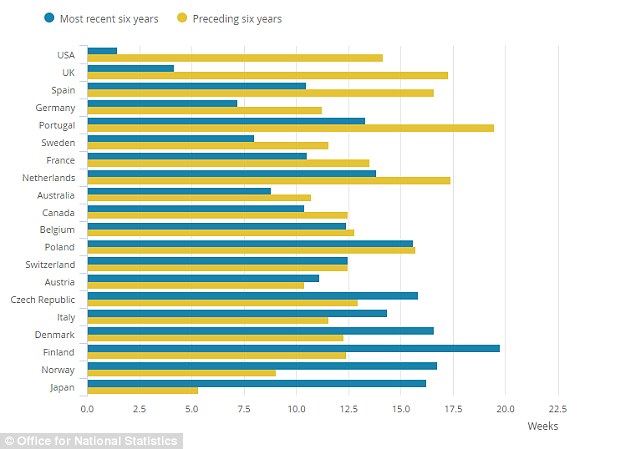 Rises in life expectancy at birth for women (left) is the lowest among 20 of the world’s top economies, and only behind the US for men (right)

For males at birth, the US endured the greatest slowing in life expectancy, closely followed by the UK and then Spain.

The jump fell from 17.3 weeks per year to just 4.2 weeks per years across the same time period in the UK, the ONS analysis shows.

The ONS claims the ‘large drop’ in the UK is in part due to a significant increase in male life expectancy between 2001 and 2011.

But it added Switzerland, which had the highest life expectancy at birth for males in 2016, maintained 12.5 weeks per year improvements between these two periods.

In terms of females at birth, the roles are reversed. The UK tops the charts, followed then by the US.

Czech Republic, Italy, Denmark, Finland and Japan all made improvements. The rest of the countries in the analysis experienced drops. 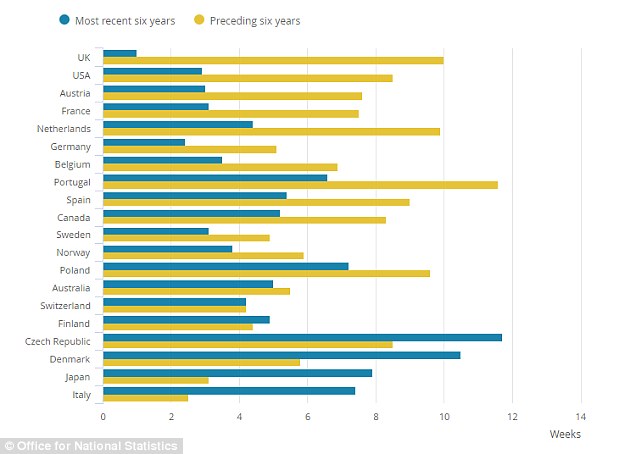 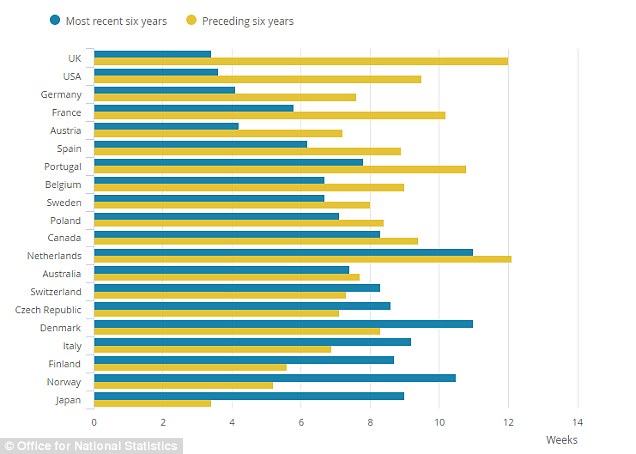 The UK was also at the bottom of the table for life expectancy improvements for men (right) and women (left) at 65 years old, followed by the US in both tables

Males and females at 65

The UK was also at the bottom of the table for life expectancy improvements for men and women at 65 years old, followed by the US in both tables.

Life expectancy improvements were slashed by around 70 per cent for men in the UK across the two periods, and 90 per cent for women.

Alan Evans, of the ONS, said: ‘The UK has experienced one of the largest slowdowns in life expectancy at birth and at age 65 years for males and females.

‘By contrast, Japan has come through a period with low life expectancy gains and has recently experienced an acceleration of mortality improvements.’

He added that this shows that ‘even after a period of slow growth in life expectancy, a country may again return to faster improvements’.

He said: ‘The UK has slumped from being one of the strongest performers when it comes to improving life expectancy to bottom of the league.

‘There is a real human cost behind these statistics and we urgently need to understand more about why this is happening.’

He added: ‘The Government needs to conduct urgent research into these worrying trends.

‘If other countries can ride out the economic storms and continue to drive up life expectancy, there is no reason why the UK should not be able to do so.’

High-Tech Sex Toys That Prove the Future Is Now

Covid warning: Treatment against Omicron could interfere with other medications