Weighing yourself twice a week helps keep off the pounds at Christmas, experts have found.

Most people put on one or two pounds during the festive period – but scientists have found simply stepping on the scales and bearing in mind some simple diet tips stops this happening.

Experts at the universities of Birmingham and Loughborough tracked 272 volunteers over Christmas last year and the year before. 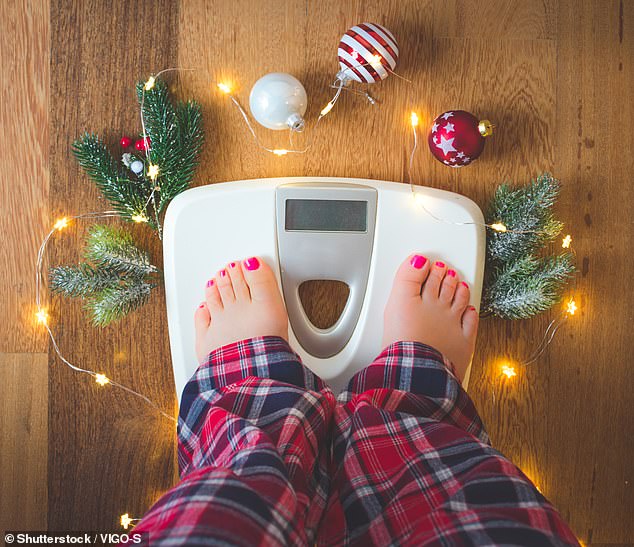 Weighing yourself twice a week helps keep off the pounds at Christmas, experts at universities of Birmingham and Loughborough have found after following over 270 participants

The participants, who were were mostly female (78 per cent), of white ethnicity (78 per cent), and 44 years old on average, were divided into two groups.

Half were given some basic tips to avoid overindulging, and asked to weigh themselves twice a week, and the other half were asked to carry on as normal.

The results, published in the British Medical Journal, saw the group who were given no advice put on 370g – just under 1lb – between November and January.

The other group actually lost a small amount of weight – 130g, about quarter of a pound.

Researcher Frances Mason, of the University of Birmingham’s Institute of Applied Health Research, said: ‘The festive season coincides with public holidays in many countries, providing an opportunity for prolonged over-consumption and sedentary behaviour.

‘Christmas is likely to tax even the most experienced weight controller.

‘Low intensity interventions such as the one used in our Winter Weight Watch Study should be considered by health policy makers to prevent weight gain in the population during high-risk periods such as holidays.’

Professor Amanda Daley, of the School of Sport, Exercise and Health Sciences at Loughborough University, added: ‘On average people gain a small amount of weight of up to 1kg each year and holidays such as Christmas are responsible for most of this annual weight gain.

‘Weight gained during holiday periods often is not subsequently lost and, although these gains are small, over ten years they would lead to a significant increase in body weight.

‘Our research has shown that a brief intervention over the Christmas period can help to prevent these small weight gains that accumulate and drive the obesity epidemic.’

The participants were given ten tips for weight management along with a list of how much physical activity would be needed to burn off calories found in popular food and drinks consumed at Christmas.

For example, they were told it would take 21 minutes of running to burn the calories in a mince pie and 33 minutes of walking to expend the calories found in a small glass of mulled wine.

The comparison group received just only a brief information leaflet about leading a healthy lifestyle, which did not include dietary advice.

Sarah Drabble, nutritionist at World Cancer Research Fund, said: ‘This is an interesting study especially as we head into the festive season.

‘Christmas seems to get bigger and more testing for our waistlines and willpower every year, and celebrating with family, friends and colleagues often means multiple Christmas lunches in December.

‘Our research shows that being overweight or obese is a cause of 12 different types of cancer.’

How much exercise does it take to burn off Christmas treats?

In the study by the university of Birmingham and Loughborough, participants in the group who were asked to weight themselves twice a week were given a list of roughly how much physical activity would be needed to burn off approximate calories found in popular food and drinks consumed at Christmas.

They were also given the following tips:

1. Try to eat roughly the same time each day, whether this is two or five times a day.

2.  Chose reduced fat foods (e.g. dairy foods, spreads, salad dressings) where you can. Use high fat food sparingly (e.g. butter and oils) if at all.

4.  If you snack, choose a healthy option such as fresh fruit or low calorie yogurts instead of chocolate or crisps.

5. Be careful about food claims on labels. Check the fat and sugar on labels when shopping and preparing food.

6. Do not heap food on your plate, except vegetables. Think twice before having second helpings.

7. Break up your sitting time. Stand up for ten minutes of every hour.

8. Think about your drinks. Choose water or sugar free squashes. Unsweetened fruit juice contains natural sugar so limit to one glass a day (200ml). Alcohol is high in calories so limit to one unit per day for women and two for men. Try diluting drinks with water, soda or low calorie mixers.

9. Slow down. Do not eat on the go or while watching TV. Eat at a table if possible.

10. Eat at least five portions of fruit and vegetables a day (400g in total).

Cannabis could be downgraded by the World Health Organization

Dementia warning: The dizzy symptom you may be ignoring – are you at risk?

More Americans Are Binge Drinking During Pandemic: How to Cope Without Alcohol

Pregnant women should get the flu vaccine, but only half actually do: CDC