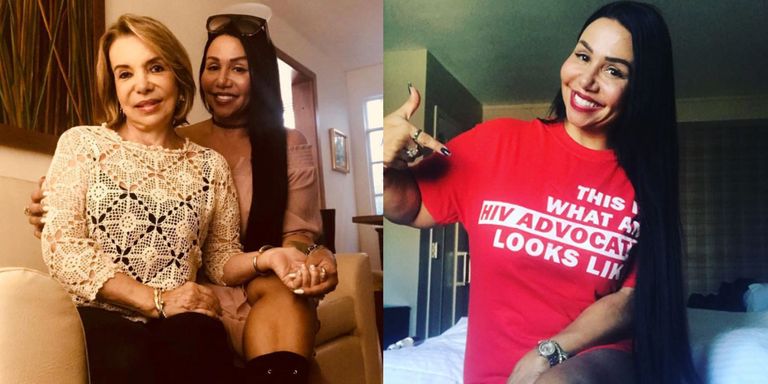 It happened just days before my 18th birthday.

I was enrolled in Job Corps—a government-funded educational program in Kentucky—at the time. It was a fresh start for me: After being sexually abused by a family member growing up, running away from home when I was 13, and joining a violent gang, this was my new chapter.

I had plans to go to Miami to visit my family for my birthday, and before doing that, I had to be cleared by the on-site doctor (it was standard protocol for the program—it was meant to ensure students were healthy before they left the campus).

I had already seen the on-site doctor once before—they gave physicals and STI tests to all new students. And in the weeks leading up to my second appointment, I’d received multiple slips from staff members saying that doctor wanted to see me. I didn’t think much of it—I felt fine—so I ignored them and avoided the clinic until I couldn’t anymore.

When I got there, the doctor asked me, angrily, where I had been—that’s when I knew something was wrong. Do I have lung cancer? I asked myself, thinking about how I used to smoke cigarettes. That’s when said the three words that would change my life forever: You have AIDS.

“I needed to go home. I thought I was going to die.”

I immediately went numb. I thought I would never get married, have a career, or become a mother. That made me think about my own mother, and how I needed to tell her.

It was 1991, and HIV/AIDS was still a pretty new diagnosis.

I now know that I didn’t actually have AIDS—but I was HIV-positive. I can’t be certain, but I think my doctor didn’t actually understand the difference himself since there was still so much confusion around the virus.

I wasn’t exactly sure how I’d gotten HIV, but it didn’t really matter to me—I was just so scared because I had something that I knew next to nothing about (other than how “deadly” it was). I thought it was a disease only gay men could get, and that it was a near-instant death sentence. And my doctor couldn’t explain it to me—there were no pamphlets to help him, either.

I was completely clueless to the fact that HIV is a virus spread through bodily fluids or that, if left untreated, HIV can progress to AIDS. I didn’t know that HIV/AIDS attacks the immune system, and I definitely didn’t know about my (limited) treatment options.

A staff member at Job Corps told me I could stay in the program if I wanted to, which I appreciated, but I knew I needed to go home—I thought I was going to die.

After the long walk back to my dorm, I called my mom.

As soon as she answered, I said it: “Mom, I have AIDS.” I told her I was dying, because I thought that I was. I couldn’t stop crying, but she tried to give me any semblance of comfort she could from 1,000 miles away. “Don’t worry, hija,” she said. “Don’t worry. Come home.”

I had a difficult childhood, but my mom was always there for me. She showed me how to be a strong woman in the face of adversity—I knew I could count on her.

After we hung up, my mom bought me a plane ticket, and two days later, she greeted me at the airport. When we got home, she sat me down and said, “I believe you will not die from this.” She was strong in her faith in God, and, although the virus has no cure, she continued to pray.

“I felt like a candle that was burning out.”

My mom wanted to comfort me, but she wanted to protect me, too. “You can’t tell people,” she told me. “They will judge you.”

She was right. There was (and still is) a stigma surrounding HIV/AIDS. She wanted to keep people in our family and community from thinking I was a “bad” or “dirty” person, even though we both knew that couldn’t be further from the truth.

My mom took me to a doctor in Miami, who offered me a prescription medication that could potentially slow the progression of the virus. He said it was the only available medication, but I had to sign a waiver before I could get the prescription, agreeing I understood it could damage my internal organs.

I decided not to sign it—it just didn’t seem worth it at the time—so I chose to go without treatment. That decision worried my mom, but still, she supported me.

Soon afterward, we moved back to Colombia, where I was born and raised.

There was no access to treatment there, so I did my best to stay healthy with a good diet and exercise. My mom made sure I was well-fed and taking care of myself. Meanwhile, we were both taking care of my grandparents, who were suffering from dementia.

“My doctor told me that if I didn’t start taking medication, I would only live another month or so.”

I actually didn’t have any physical symptoms until 2000—nine years after my diagnosis. I started feeling so fatigued and exhausted all the time. I was nauseous and had diarrhea. I felt like a candle that was burning out.

I knew I needed medication, and I knew that there would be better treatments back in the United States. It was extremely difficult, but I left Colombia and my mom and headed back to Miami.

There, I went straight to another doctor. He confirmed that my HIV had progressed into AIDS, and I needed treatment—fast. He said if I didn’t start taking medication immediately, I would only live another month or so.

I agreed, and again, called my mom right afterward. I could hear her relief through the phone. She told me she had been praying that I would come around to the idea of using medication.

I started an oral treatment immediately. This time, I didn’t need to sign a waiver. Though the medication wasn’t side-effect free, it was a lot less risky than my options had been a decade before.

“I was the first HIV-positive person to come out publicly in Colombia.”

Since then, I’ve made it my mission to help HIV-positive people around the world get accurate information, treatment, and support. I began blogging about my experience and later started working as the global ambassador for The Well Project, a nonprofit organization that helps HIV-positive women and girls worldwide get the information they need.

My mom, who had previously been too scared to tell her family about my diagnosis, was hesitant about my going public—she was still very concerned about the stigma attached to HIV/AIDS.

But I told her I felt as though activism was my mission in life. “This is bigger than me; I can save lives,” I said. Eventually, the more I shared with the public, the more my mom started to understand why I felt so strongly about sharing my story.

My mom still lives in Colombia, and I see her about twice a year. We talk all of the time, though, and I know how proud she is of my 20 years of activism in the HIV-positive community. I was the first HIV-positive woman to come out publicly in Colombia, and I was recently interviewed for a magazine there with my mom sitting next to me, holding my hand—something that was hard for her. But, as my best friend, she was there to support me and the entire AIDS community.

When I heard my diagnosis for the first time, I thought love, happiness, and a great career weren’t possible for me. Now, I’m 45, and I know that I couldn’t have been more wrong. I’ve been in great, loving relationships, and I’m using my voice to help people around the world.

It’s not easy being HIV-positive, but I know when I need strength, I can lean on my mentors, friends, family—and, always, of course, my mom.

Is it wise to carry on shielding between your first and second jabs?

Tess Holliday Gets Real About Her Life as a Mom: 'I Might Be Fat, But I'm Flexible AF'

Best fruits to eat during pregnancy and what to avoid