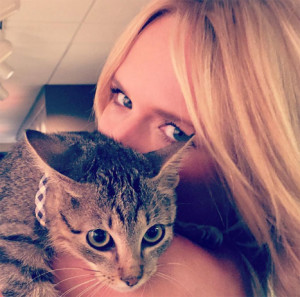 Kitten adoption stories don’t get much cuter than this. Country music superstar Miranda Lambert is well known for her love of animals to the point of adopting at least 15 of them, including chickens and unicorns (ok, they’re horses, but Miranda calls them unicorns, so we’re running with it!). The warm-hearted songstress is also known for her passionate activism, especially through her MuttNation Foundation for homeless, abused and neglected animals. Now, the award-winning singer has added another soft and cuddly creature to her family and this time it is a stray kitten which she has named Curtis Leow.

It pleases us to report that Miranda isn’t the only star in this kitten adoption tale. See, it was her friend, Harper Elizabeth Lundy (aka @harps226 on Instagram) who actually found the formerly homeless kitty on an Arkansas highway. As any great friend of an animal lover would do, Lundy brought the sweet furball to Miranda’s home where it was given a new name and a new start in life.

Miranda introduced Curtis Leow to the world in an instagram post at the beginning of October. Then, a week later, Miranda shared a second post announcing she’d just learned that Curtis is a she, not a he. Hey, it happens sometimes! As any kitty aficionado can attest, it’s a little hard to tell the difference when they’re so young.

What’s In a Name?

Gender norms aside, this cutie pie’s name still stands. And if you’re feeling like it rings a bell somewhere in the recesses of your mind, you’re probably right. Miss Curtis Leow is named after the 1974 hit song “The Ballad of Curtis Leow” by legendary southern rockers, Lynyrd Skynyrd.

Kitten Adoption and Beyond

Stories about kitten adoption are so much fun to share, aren’t they? With so many homeless animals in the world, it feels good to celebrate when one is welcomed into a new family. November is Adopt a Senior Pet Month, so while we celebrate this beautiful kitten rescue story we also invite you to share other pet adoption stories in the space provided below.

Create Your Own Social Media Fundraiser This Giving Tuesday!

Disparities in Use of Physical Restraint on Children in the ED

Fear and anger as cholera strikes again in Zimbabwe

Detecting ADHD with near perfect accuracy