Sitting in front of the TV for two hours a day raises your risk of bowel cancer by 70%, scientists declare amid sharp rise in cases

Sitting in front of the TV for as little as one hour a day can increase your risk of bowel cancer, a study has found.

Those who lazed in front of the TV for two hours a day or more had nearly a 70 per cent increased risk.

It’s the first time sedentary behaviour has been identified as a factor to explain the sharp rise in cases of bowel cancer among those under the age of 50.

International researchers said the findings stress the importance of keeping active, even though the associations were independent of a person’s weight or exercise level. 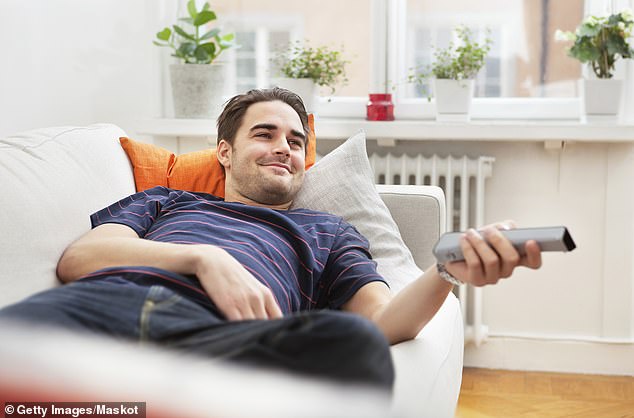 Watching TV for as little as one hour a day can increase young people’s risk of bowel cancer by up to 12 per cent, a study has found

A total of 89,278 American women in the Nurses’ Health Study II were included. The female nurses were aged between 25 and 42 years at the beginning of the study in 1991.

There were 118 cases of young-onset colorectal cancer – including of the colon and rectum – diagnosed over the two decades of follow up.

More than one hour of sitting in front of the box was associated with a 12 per cent increase in risk compared to those who watched less.

The findings were consistent among women who didn’t have a family history of bowel cancer.

The association was stronger for rectal cancer in comparison to colon cancer.

‘A sedentary lifestyle is an emerging risk factor for CRC after age 50 years, but its role in young-onset CRC is unknown.

WHAT IS THE NHS’ BOWEL CANCER SCREENING PROGRAMME?

Bowel cancer screening is offered to those aged 60 to 74 in England, Wales and Northern Ireland – but not anyone younger.

The main screening method is the faecal occult blood test (FOBT), which looks for hidden blood in stools. It is posted to people in the age range every two years — they then post a sample back.

Bowel cancer is the UK’s second biggest cancer killer – around 16,000 people die from it each year.

If caught early, at stage one, patients have a 97 per cent survival rate for at least five years, but discovered later, at stage four, this falls to just 5 per cent for men and 10 per cent for women.

Former Tory health secretary Lord Andrew Lansley launched a screening programme, called bowelscope, to detect signs of cancer for 55 year olds eight years ago. It was due to be rolled out nationally in 2016 – but fell foul of financial cuts.

Bowel cancer screening starts at 50 in Scotland. The decision to start 10 years later in the rest of the UK has been the subject of controversy.

BBC news presenter George Alagiah previously said his bowel cancer could have been caught earlier if the screening programme in England was the same as in Scotland.

He was first diagnosed four years ago, at the age of 58; last Christmas he was told that the cancer had returned and it’s now stage four.

‘Independent of exercise and obesity, prolonged sedentary TV viewing time, a surrogate for a more inactive lifestyle, was associated with increased risk of young-onset CRC, particularly of the rectum.

‘These findings provide further evidence on the importance of maintaining an active lifestyle.’

‘We observed no clear increase in risk for other forms of sitting at home, such as meal time or time spent at a desk,’ the authors wrote.

Those with a reduced risk of of bowel cancer reported greater light intensity behaviours, such as standing or walking at work or home.

‘This study may help identify those at high risk and who might benefit more from early screening,’ said study co-author Dr Yin Cao from Washington University School of Medicine.

‘The fact that these results were independent of BMI and physical activity suggests that being sedentary may be an altogether distinct risk factor for young-onset colorectal cancer.’

In 2018 alone, there were 1.8million new cases of colorectal cancer around the world and it cost 881,000 people their lives.

Traditionally, the killer disease – which is mostly preventable – is considered to only strike people who are over the age of 50.

But more and more people in their 20s and 30s have been getting diagnosed with colorectal cancers.

Obesity and the Western diet’s high content of processed and fatty foods has been particularly of interest as the cause.

For 42 countries, including US, China and Australia, deaths from colon cancers are set to increase by 60 per cent between now and 2035, according to a recent International Agency for Research on Cancer study.

In Europe, rates of colon cancer among adults aged between 20 and 39 have shot up by 7.4 per cent annually between 2008 and 2016, according to researchers.

Numbers of cases have been decreases among older people, largely as a result of cancer screening initiatives.

In 2018, the American Cancer Society lowered the age when it recommends people start getting screened for colorectal cancers from age 50 to 45.

What is bowel cancer and what are the symptoms?

Bowel, or colorectal, cancer affects the large bowel, which is made up of the colon and rectum.

Most cases have no clear cause, however, people are more at risk if they:

More than nine out of 10 people with stage one bowel cancer survive five years or more after their diagnosis.

This drops significantly if it is diagnosed in later stages.

According to Bowel Cancer UK figures, more than 41,200 people are diagnosed with bowel cancer every year in the UK.

It affects around 40 per 100,000 adults per year in the US, according to the National Cancer Institute.

My Day on a Plate: Hayden Quinn