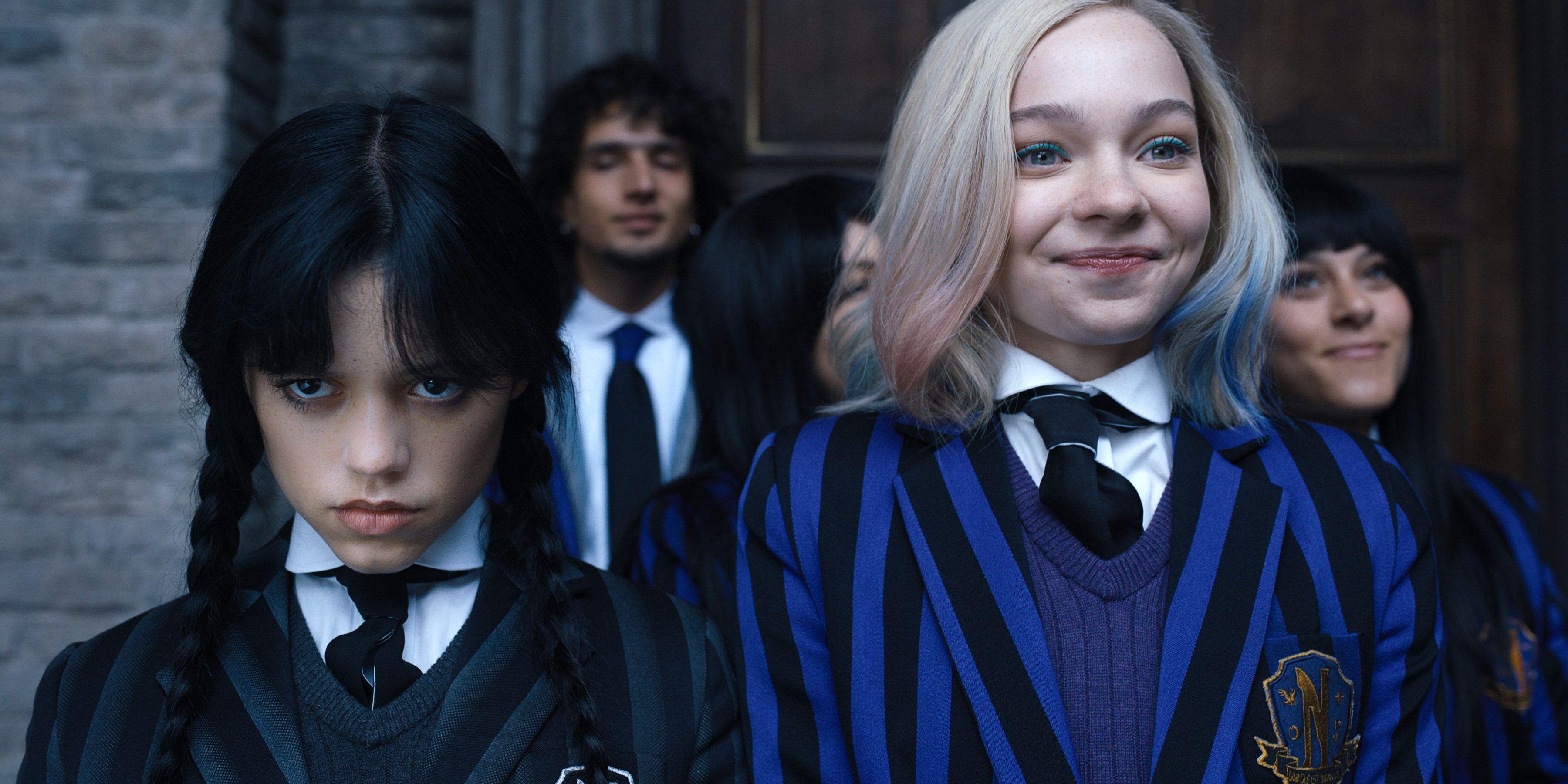 From her allergy to colour to her penchant for violence, Wednesday Addams can’t be the easiest person to be besties with. And yet, lovable werewolf Enid Sinclair manages it.

With her rainbow stripped hair and sunny disposition, she’s the antithesis of Wednesday – but opposites certainly attract.

Over the course of Netflix’s hit series, the unlikely duo became fast friends – and while fans love them (many are even begging for a Wednesday and Enid romance), we can’t help but wonder if Enid is a little too loyal to her best pal.

Whether she’d being dragged into a haunted house, or teased about her beloved Poe Cup, Enid often ignores Wednesday’s less than favourable behaviour.

And even when it seems like Wednesday is being a good friend, is she really?

Excitable Enid couldn’t wait to don her buckled shoes and work at Pilgrim World – but Wednesday convinced her to switch. Yes, it was under the guise of pairing up Enid with her crush, but viewers know the truth.

Sure, IRL it’s unlikely your BFF is a murderous, future-seeing 16-year-old, but there are lessons to be learnt from their friendship.

If you constantly find yourself turning a blind eye – or even apologising – for your friend’s behaviour, you could be guilty of the Enid Effect.

Yes, there were times Enid called Wednesday out (Thing 100% deserved that apology) but she often found herself caught up in her friend’s poor decisions.

Of course, it’s important to be supportive of your loved ones. Psychologist Emma Kenny says: ‘It’s excellent when we have friends who genuinely have our back, and support us in all circumstances, come what may.’

But the Enid Effect comes into play when you’re so agreeable, that it does more harm than good.

Emma says: ‘While the easiest route in a great friendship is to agree with what ever your friend is thinking, support what path they’re taking, and to defend them – even at times when it seems their position is indefensible – you could be creating some destructive mechanisms.’

Instead, part of being a good friend is to offer an alternative perspective.

‘The job of a really good friend is to challenge your friend’s perception of certain circumstances, if you think that those circumstances may do them harm in the long run,’ says Emma.

How to challenge your friends:

‘For example, when someone constantly moans about a partner, it can be easy as a friend to just join in, but that person may be being inappropriate or unfair, or be the one causing issues, rather than their partner.

‘It can be easy to just join in, as it makes for an easy listening situation, and your friend loves the fact that you’re always there for them. But the long-term damage is that this relationship might end or even become abusive.’

A great thing about having a close friend, is that they can judge you, in a way that isn’t harmful or upsetting.

‘We often love saying that our friends are great, that they’re our “ride or die” because they don’t judge us,’ says Emma, ‘But a lot of us need to be judged.

‘Sometimes we’re nasty, cruel, silly and make terrible calls. If all we have is someone clapping and congratulating us at times when we actually need to be challenged, then we’re colluding with a negative behaviour pattern.’

But equally, being a good friend also means you’re not being critical just for the sake of it.

Emma explains: ‘You don’t want a friend who is hyper critical or vigilant. You need someone who you know, 95% of the time, is totally with you. But that means that for that 5% of the time, when they do say “this isn’t okay”, you’ll really take notice.

‘You need someone who says, “I love you, but you’re not perfect, and sometimes I’ll help to point that out.” That’s very powerful.’

Get in touch by emailing [email protected]

New epigenetic editing technique may advance the treatment of many diseases

Lauren Conrad Confirms Her Son Is a Tiny Drunk Adult

This Much Coffee May Be Detrimental To Your Health

How to Keep the Clock Change From Messing With Kids’ Sleep