Baby brought back to life in the back of an ambulance after he was REFRIGERATED: Newborn stopped breathing but survived after his temperature was lowered by 4°C using a cooling blanket

A newborn, who stopped breathing just an hour-and-a-half after being born, survived after being ‘refrigerated’ in the back of an ambulance.

Simon Meanwell, now six months, was born healthy until he suddenly stopped breathing, with doctors rushing the youngster to a specialist neonatal clinic in a race against time.

While in the ambulance, Simon, from Colsterworth, Lincolnshire, was placed on a cooling blanket that lowered his temperature by 4°C (39°F) – the medical equivalent of being refrigerated.

Such a blanket contains cool circulating water that decreases an infant’s body temperature from 37°C-to-33°C (98°F-to-91°F) for three days, before allowing it to return to normal.

The relatively new treatment is thought to prevent babies who are deprived of oxygen from suffering seizures by slowing the production of harmful substances in their brains and decreasing the rate of brain cell death.

Simon’s parents James and Helen Meanwell, who believe their son only survived due to the treatment, are speaking out to raise money for the facilities and medical teams that saved his life. 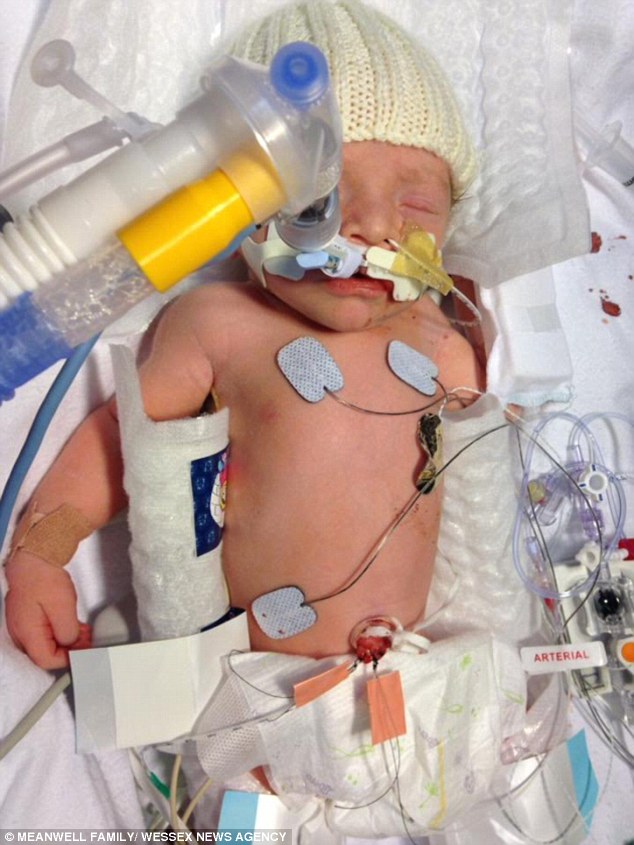 Simon Meanwell, who stopped breathing just an hour-and-a-half after being born, survived after being placed on a cooling blanket in the back of a paediatric ambulance 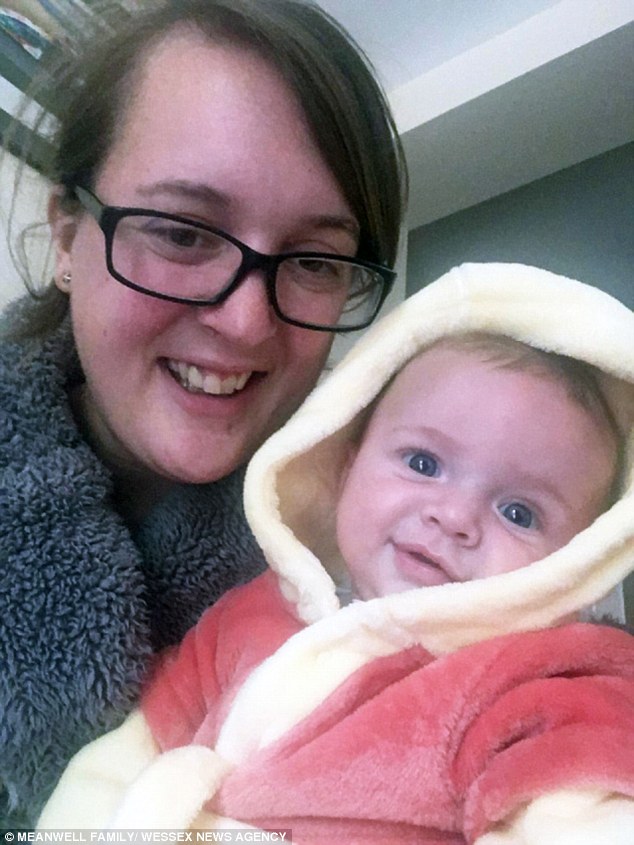 Now seemingly healthy, Simon’s father and mother Helen (pictured) believe their son’s future would have been very different had he not had the revolutionary treatment 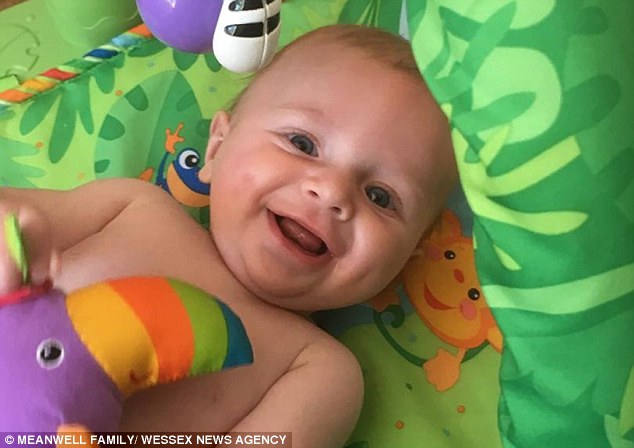 WHAT IS A COOLING BLANKET? AND WHY IS IT GIVEN TO BABIES?

Babies may be placed on cooling blankets if they are unable to breathe on their own or are showing signs of having abnormal nervous systems.

Known as therapeutic hypothermia, the blankets circulate cool water around babies, which lowers their temperatures by around 4°C (39°F).

This reduces their risk of seizures by half and brain injury by 25-to-50 per cent.

Babies can be wrapped in such blankets within minutes or hours of their births.

The blanket is kept on the infants for up to 72 hours during their stays in neonatal intensive care.

Once removed, the babies are slowly re-warmed to their natural temperatures.

Some infants can be held by their parents while on the blankets, allowing bonding.

‘He was absolutely fine but then stopped breathing’

Simon was born at Peterborough Hospital, with everything initially seeming to go to plan.

Yet the newborn suddenly stopped breathing 90 minutes later, with doctors rushing to give him CPR. It took medics three attempts at resuscitation for Simon’s tiny lungs to work on their own again.

Mr Meanwell, 41, said: ‘He was absolutely fine when he was born but then he stopped breathing. It took six minutes to get his heart started.’

Simon’s condition was so serious he needed transferring to the specialist neonatal intensive care unit (NICU) in Norwich.

Mr Meanwell, who works at a company that imports quad bikes, said: ‘The vehicle is basically a NICU in the back of an ambulance.

‘As soon as they had resuscitated him they started what they call a cooling process, which lasts for 72 hours.’ The blanket contains cool circulating water that lowers an infant’s body temperature from 37°C-to-33°C for three days, before allowing it to return to normal 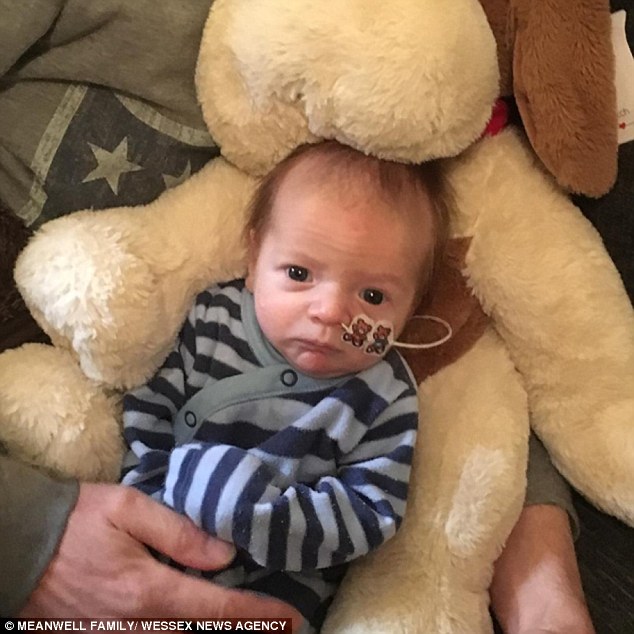 Simon stayed at the specialist clinic for two weeks, where his parents described the care and support as ‘outstanding’, before being allowed back to Peterborough hospital, where he spent a further fortnight.

Mr Meanwell said: ‘The first couple of days we were just totally in shock. It was very upsetting.’

Although it is unclear how effective cooling treatment is long term, Mr Meanwell claims Simon appears to be healthy.

He said: ‘He has a ridiculous number of medical appointments, it works out as around one every three days including nurses coming to see him at home and things.

‘He’s doing very well though but we don’t know what will happen, it all depends how he develops.

‘We are in no doubt that had a special paediatric ambulance not been available as promptly as it was Simon’s future would be looking very different to what it does now.’ Now healthy, everything initially seemed to be fine when Simon was first born 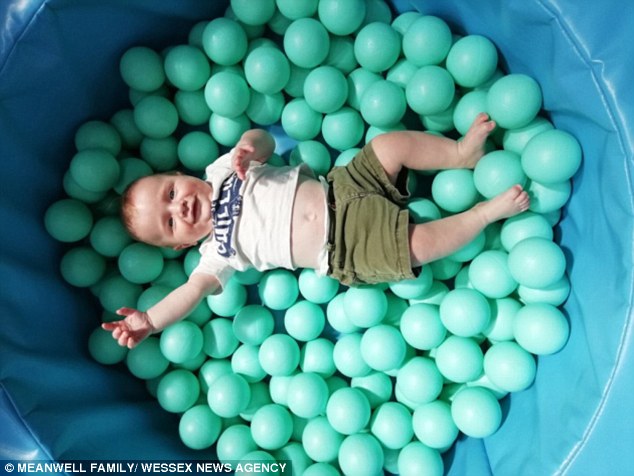 Kylie-Jenner obsessive had fillers SPILL OUT of his lips

As dementia’s toll rises, new study shows major gaps in who gets care that could help them remain at home

They are poisonous or can make you ill: Seven foods, the raw food you should never